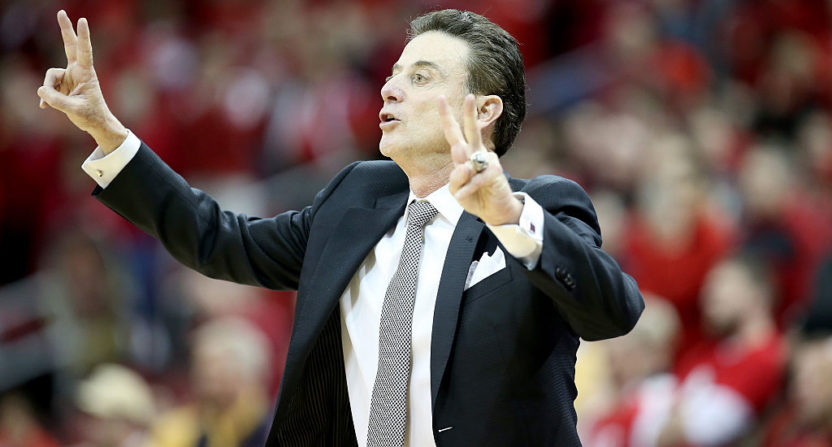 The more we learn about the scandal unfolding in Louisville, the more we learn about how shady Rick Pitino’s basketball program and Tom Jurich’s athletic department were. According to a report by the Courier-Journal, 98 percent of the money from the school’s sponsorship deal with Adidas went straight into the hands of Pitino.

Pitino’s earnings were legal, but that doesn’t make them ethical. Louisville’s contracts with Adidas to take funds from the contract and give them to athletic coaches under a personal services agreement, according to the report:

In 2015-16, for example, $1.5 million went to Pitino under his personal services agreement with the apparel company while just $25,000 went to the program, according to a contract obtained by the Courier-Journal under the state public records act.

And that was better than the year before:

Of course, if we know anything about Rick Pitino, I’m sure he’s shocked to find this out and had no idea it was happening.

When Louisville signed a fresh, 10-year deal worth $160 million with Adidas this summer, Jurich stated the money is for the student-athletes:

“It’s for the athletic department,” Jurich replied. “It’s for these student-athletes. It’s been earmarked for them.”

Rather than admitting its fault, Louisville is actually standing by those remarks, claiming earmarking that cash to a coach is a de facto way of earmarking it for student-athletes. Here’s the justification athletic department spokesman Kenny Klein gave to the Courier-Journal’s Andrew Wolfson:

“Players come here in part because of Coach Pitino. Coaching is part of what we give to student-athletes,” Klein said last month before a bribery scandal prompted the suspensions of Jurich and Pitino.

In addition to being college basketball’s highest paid coach — he was set to make $7.8 million this season — Pitino apparently needed an extra million-and-change to provide the expert coaching his players signed up for. That’s a comical sentiment.

Louisville’s new contract with Adidas will bring in $79 million in cash over the next ten years, with the rest of the value administered through athletic gear. The argument against pay-for-play has lost some steam as the FBI’s findings of bribery show schools and apparel companies believe top prospects are worth not only thousands of dollars, but also potential federal jail time. But one factor that’s slightly mitigated the exploitation of college athletes is that schools put the money from these huge shoe deals back into their programs to provide a better athletic experience.

So next time someone says athletic departments don’t have enough money to pay players, remember that Louisville threw $1.5 million at a coach who was already making five times that amount.