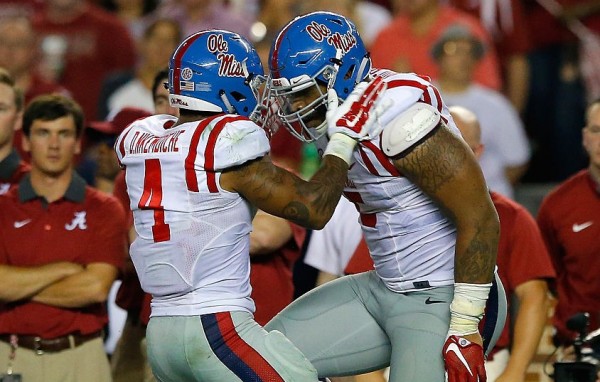 Mississippi defensive lineman Robert Nkemdiche has been suspended for the Sugar Bowl against Oklahoma State, the team announced Sunday.

Nkemdiche, who was charged with marijuana possession last week, will also soon declare for the NFL Draft, ending his college career.

Robert Nkemdiche won't play in the Sugar Bowl. He's headed to Miami today for some down time with his brother, Bryan, before draft prep.

The suspension results from an odd incident last week in which Nkemdiche fell 15 feet from a first-floor hotel window then was charged with marijuana possession when police found seven rolled marijuana cigarettes in his room. Nkemdiche was not seriously injured in the fall, but Ole Miss head coach Hugh Freeze said last week he wasn’t sure the junior would be fully healthy and able to play in the Sugar Bowl.

Nkemdiche was the top overall recruit in the Class of 2013, according to 247’s composite rankings. In three seasons in Oxford, he has 81 tackles, 16 tackles for loss, and six sacks. The defensive lineman was named second-team All-SEC in 2015.

Nkemdiche ranks as one of the top prospects for the 2016 NFL Draft. ESPN Todd McShay had him going third overall in his first mock draft of the season.

We’ll see if the suspension affects NFL teams’ perceptions of Nkemdiche — you wouldn’t think smoking weed drops him too far. He addressed that concern in a statement issued Sunday morning.

No. 16 Mississippi plays No. 13 Oklahoma State on January 1 in the Sugar Bowl.