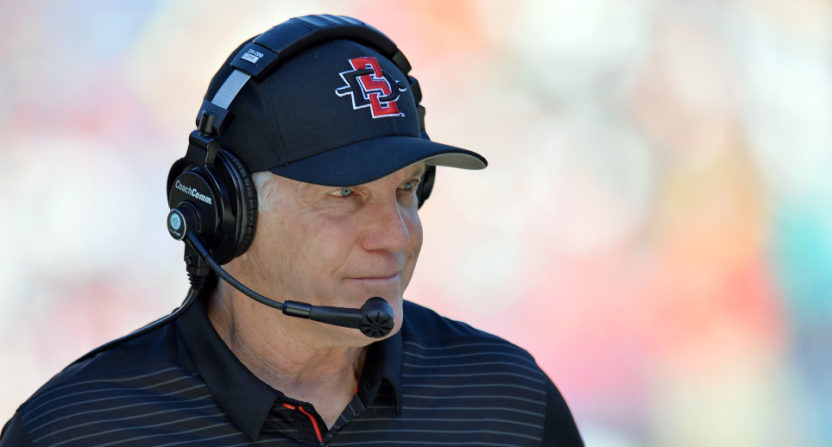 It’s not uncommon to hear critics of the NCAA not paying its players blast the escalation in coaching salaries, or to hear that from past coaches who didn’t make as much, but it’s more unusual to hear that come from a current NCAA coach. But San Diego State Aztecs head coach Rocky Long offered that very perspective Monday on The Mark and Rich Show on Fox Sports’ XTRA 1360 (San Diego). Here’s Brett McMurphy’s relaying of Long’s quote about new Texas A&M coach Jimbo Fisher‘s 10-year, $75-million contract:

SDSU’s Rocky Long on Jimbo Fisher’s $75M contract: “He doesn't make 1 tackle, doesn't catch 1 pass, he doesn't score 1 TD. We’re not only in this to have a salary, we're in this to develop young men so (coaching salaries are) embarrassing at times” via Mark & Rich Show XTRA 1360

The clip doesn’t seem to be posted on the show’s website yet, but their Twitter account retweeted McMurphy, so that’s a further sign it’s accurate. And it’s an interesting one. Without the clip, we don’t have the full context, and this is far from the first time a coach has proclaimed his job is to “develop young men,” but it’s certainly notable to have a current coach call a salary like Fisher’s “embarrassing.” And it’s a quote that’s seemingly somewhat against Long’s own interests; yes, it makes him look good to say that’s a crazy contract, and yes, Long himself isn’t getting offered the kinds of money Fisher is (USA Today‘s database has him 82nd in the country this year with a salary of $826,304), but rising prices for coaches at the biggest schools tend to also somewhat boost prices for coaches at smaller schools. Inflation in coaching salaries can’t be bad for coaches.

Perhaps the even more interesting part here is how Long’s comments focus in on Fisher not playing. He’s absolutely right there, as the really dangerous work involved in NCAA football is done by the players, not the coaches. That’s why many people have repeatedly advocated for players to be paid. But NCAA schools and many coaches have long been strongly against that. Without the full clip, we don’t know if Long goes into that more, but his comments would certainly seem to provide some ammunition for movements to cap coaching salaries, pay players or both.