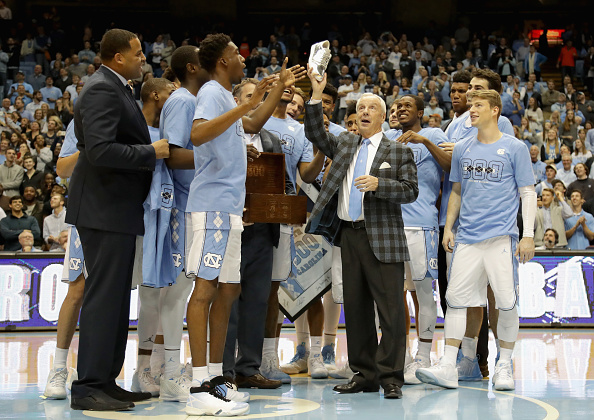 On Monday night, Roy Williams and the University of North Carolina Tar Heels improved to 17-3 with a 85-68 win over the Syracuse Orange. The thing is, the win wasn’t just UNC’s 17th of the season, but also the 800th of Roy Williams’ career.

To celebrate win No. 800, Jordan Brand gave Williams a custom pair of Air Jordan 1 Lows that were even signed by Michael Jordan (a former Tar Heel, of course):

Roy Williams was given custom shoes signed by Michael Jordan in honor of his 800th career win. https://t.co/IRbHuGKo71

The reactions of the players is priceless. They all can’t believe what they are seeing and are simply shocked their coach gets those awesome sneakers and they don’t.

Here’s a closer look at them:

The shoes are awesome, but the box they came in may be even better. The wood case has “800” inscribed on it to celebrate the victory. When you open the lid, the clear sheet over the shoes has the logos of the eight Final Fours Williams has been to as a Head Coach (four of which have come with UNC, while the other four were during his time in Kansas).

Here’s a longer look at the ceremony:

Roy: "For me, the best news is that I'm not dying" pic.twitter.com/jriNdZdyAv

What makes the 800 wins even more impressive is that Williams is the second-fastest to reach that mark in college basketball history. The win came in his 1,012th game, giving him an overall record of 800-212, and a winning percentage of .790. Adolph Rupp coached at Kentucky from 1930-1972 and is the fastest to get to 800 wins in just 972 games.

For reference, Coach Krzyzewski accomplished the feat in 1,064 games while Coach Boehiem did in his 1,088th contest.

As for the all-time list of most wins in a career, Williams is 8th with his 800 wins. Here are how the seven rank ahead of him:

The next active coach on the list with the most wins is Louisville’s Rick Pitino who has 758.

Williams wasn’t the only person to receive an amazing pair of custom Air Jordans on Monday, as President Barack Obama was also presented a pair by Dexter Fowler during the Cubs’ World Series visit at the White House.