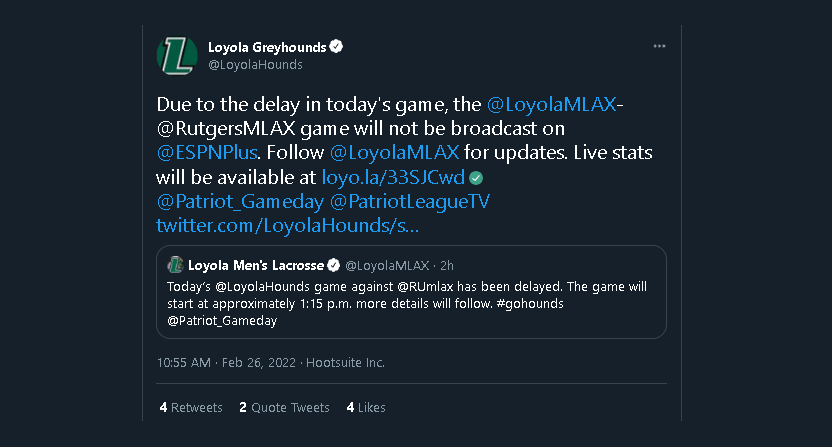 One of the stranger reasons for a college sports delay in some time came Saturday, with the Rutgers Scarlet Knights‘ men’s lacrosse team’s road game against the #19 Loyola (Maryland) Greyhounds delayed 75 minutes reportedly over the Scarlet Knights initially leaving their uniforms behind. That game was set to start at noon Eastern, but only got underway at 1:15 p.m. Eastern, and Patrick Stevens wrote at USA Lacrosse Magazine that it was the jerseys that were at issue:

The Rutgers-Loyola men’s lacrosse game was delayed at least 75 minutes for an atypical reason.

The Scarlet Knights left their jerseys in New Jersey.

The uniforms were expected to arrive at the Ridley Athletic Complex around 12:45 p.m. after making the 170-mile trip from Piscataway, N.J. Rutgers had players shooting on the field well before the scheduled noon start, and the team began more structured warmups while wearing white hoodies at about 12:15.

Rutgers’ goalies emerged from the locker room clad in the team’s black jerseys at about 12:55 p.m., 20 minutes before the rescheduled 1:15 p.m. faceoff.

Stevens, who was at that game, had some more on this on Twitter:

It would seem uniform issues are the root of the delay for Rutgers-Loyola.

It would seem the Scarlet Knights left their jerseys in Jersey.

Meanwhile, Loyola noted that the delay meant the game would not air on ESPN+ as initially scheduled:

Due to the delay in today's game, the @LoyolaMLAX-@RutgersMLAX game will not be broadcast on @ESPNPlus. Follow @LoyolaMLAX for updates. Live stats will be available at https://t.co/xeVX4mN8YI@Patriot_Gameday @PatriotLeagueTV https://t.co/agKhfqTqrm

And that unsurprisingly drew some angry and profane responses.

It’s unclear what specifically led to the game being taken off ESPN+. With a linear channel, a delay of this sort might run into other programming, but that’s not the case with a streaming service that treats each game as a discrete event. However, it’s certainly possible that the delay created unresolvable conflicts for the broadcasters or the production truck. And it’s unfortunate that this game wasn’t broadcast as a result.