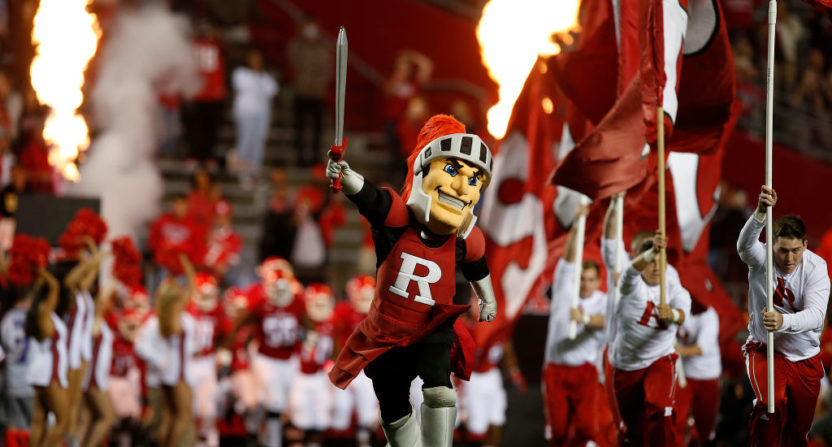 The thing about breaking NCAA rules is that you kinda have to make it count. If you commit a bunch of violations and still can’t win, what does that say about you and your school?

Case in point, Rutgers. The Scarlet Knights were just slapped with two years of probation, a $5,000 fine, and other sanctions by the NCAA Committee on Infractions because the school failed to monitor its football program under former head coach Kyle Flood. They also slapped Flood and a former assistant coach with a one-year show-cause order, meaning any school that tried to hire either of them during the next year would have to make a compelling case as to why they should have full access.

Compared to NCAA violations such as the ones that went down at Miami, North Carolina, and USC, they’re fairly tame. The NCAA even called out Flood’s “casual approach” to NCAA rules during his tenure, as if they were more the result of his stupidity than any kind of ill intent. Perhaps there’s truth in that.

The real violation, as far as Rutgers fans should be concerned, is what Flood accomplished with all of this rule-bending. Rather, what he didn’t accomplish. After taking over the program from Greg Schiano at what would be considered the best Rutgers Football has ever been, Flood won nine games and led the Knights to the Russell Athletic Bowl in 2012. Things sputtered in his sophomore season as Rutgers finished with six wins, barely making its way into the Pinstripe Bowl. His third season, and the school’s first in the Big Ten, was a respectable 8-5 finish culminating in Flood’s only postseason win in the Quick Lane Bowl.

In 2015, the wheels fell off of the program. A staggering number of Rutgers players were arrested and Flood was suspended three games after the university investigated his improper contact with a professor over a student’s grades. The team finished 4-8 and Flood was fired following the season. Rutgers athletics director Julie Hermann also resigned in the wake of this and other scandals under her watch.

While his 27-24 overall record doesn’t scream disaster, Flood was always going to be measured against his predecessor. In his final six seasons with RU, Schiano went 49-28, took the team to six bowls, and oversaw an 11-win campaign in 2006 that changed the entire reputation of the program. Flood was a continuity hire who did not live up to that expectation, and that before you factor in that he was bending or breaking the rules while doing so.

In Flood’s wake, Rutgers has reverted back to what it was for decades before Schiano got there. It’s a laughingstock. A stat-stuffer. A bottom-dwelling program that offers itself up to the conference’s best and brightest in the name of ticket sales.

UPDATE: Rutgers got their first 1st down of the game and the fans are very excited. pic.twitter.com/oKYXV7g401

Whatever Kyle Flood was hoping to accomplish with his “casual approach” to NCAA rules, it did nothing. In the end, they helped him hasten Rutgers’ fall back to earth.

And so, Chris Ash is picking up the pieces left behind but, boy, it’s going to take some major lifting to get close to anything resembling the “glory days” in New Brunswick. The schedule is a yearly nightmare, the school isn’t protecting it’s precious recruiting base like it used to, and whatever shine the school earned a decade ago is officially gone. And now, because they had a dumb coach doing dumb things under a dumb administration, people are paying strict attention to how they handle themselves, which means there’s no room for anyone to approach NCAA rules casually, as might be the case elsewhere.

If white male privilege were a college football team, it might be Rutgers. Unaccomplished for most of the modern era. Noted for a very brief moment when they were good (but not really that good considering their “best” season ended in the Texas Bowl). Bestowed with a sweetheart place in the Big Ten thanks to their location instead of any on-field merits. And they weren’t even good enough at cheating to make it count. Meanwhile, more accomplished football programs sweat it out in the AAC because they’re in the wrong place at the wrong time.

If it’s any consolation, it sounds like Rutgers is going to be stuck here for a while.