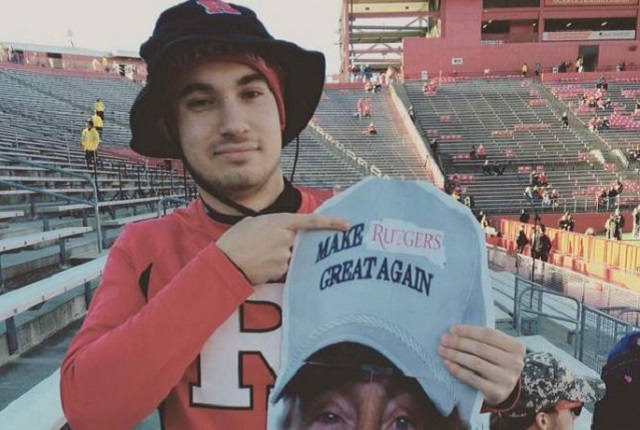 With the college football coaching carousel starting to see more spots in power conferences fill up (Miami added Mark Richt, officially), there are few jobs left open. One happens to be at Rutgers, where former Temple and Miami head coach Al Golden appears to be a possible target.

But others are lining up with interest in the job, including Ben Kautz, a 19-year-old Rutgers student who has thrown his own hat into the ring to be considered for the coaching job with the Scarlet Knights.

Kautz took it upon himself to update his résumé and submit it to Rutgers officials for review. Rutgers Associate Athletic Director Geoff Brown even offered his endorsement, even if just as a good-humored show of appreciation for support of the program.

I am blessed to be considered for the Rutgers Football Head coaching job #Kautz4Coach @RFootball @KSargeantNJ pic.twitter.com/KbdzAEMzbO

Kautz has a few things in his favor for being a candidate for the job.

“I am the best candidate for a few reasons: First off, I have never been fired from a head coaching job before,” Kautz said in an interview with NJ.com. Our sources here at The Comeback can confirm this is an accurate statement.

“Secondly, I think my age will allow me to build a very long dynasty at Rutgers, and I will be able to relate to the players and recruits better than the other candidates,” Kautz added. Again, he is a Rutgers student, so he knows all about that student life.

“Third, look at my past coaching experience, I rarely lose. Finally, all the other coaches demand a high salary, I simply want free tuition for my last two years, and a small salary while on the job—however I am certainly open to being paid $5 million per year.”

Now THAT is a good selling point for Rutgers. Kautz will barely cost the program a dime in the long run, unless he lives up to his own hype and leads Rutgers to a Big Ten championship in three straight seasons. Then we’ll talk about a new contract.

Rutgers needs a new leader that can provide some stability. What better way to bring stability to a program than a 19-year-old college student? I mean, what’s the worst that could happen, right? RIGHT?