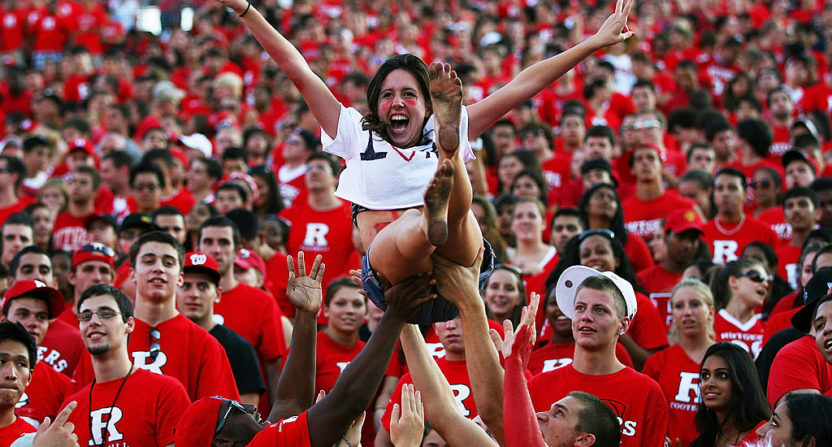 Rutgers is trying everything they can to engender excitement for their football season, up to and including an attempt to bring a little slice of the Jersey Shore into their stadium.

Via NJ.com, at their season-opening home game against the heavily favored Washington Huskies, Rutgers plans on giving away sunglasses and tank tops to thousands of students, along with offering a premium seat contest that would allow students to watch the game from a pool or hot tub above the student section.

For the season-opener against No. 7 Washington at 8 p.m. on Friday, Sept. 1, Rutgers will install a temporary pool or Jacuzzi atop the student section, the school announced Thursday. Students will have an opportunity to win the premium select seats and cool off in the water.

For the crowd at large, there will be boats in the north end zone with all fans given the opportunity to win a seat and watch the game from field level. The stadium concession stands will also feature Jersey Shore-oriented options.

The game itself takes place before classes resume, but Rutgers obviously doesn’t want to host a top-10 opponent with a nearly empty stadium, although that wouldn’t be anything new for Rutgers. They’re even going to erect a temporary Atlantic City boardwalk feel around the stadium:

The Jersey shore coastline will be stretched to Piscataway for a one day as Scarlet Knight Way — the street on which the stadium sits —  will feature boats, carnival and boardwalk games as well as Jersey-themed food trucks.

The Block ‘R’ Party hosted before every game has been altered to include a performance by Jersey Shore band Good Noise, volleyball nets, lifeguard stands and a 10-by-12-foot sand sculpture outside the stadium. There also will be a Kids’ Zone with inflatables, face painters, balloon animals, a magician and juggler.

Presumably, at some point in all this, there will also be a football game going on. Rutgers doesn’t seem to be playing up that aspect quite so much when attempting to attract people to the stadium, but then again, given how things have gone for Rutgers the past few years, that’s probably the right call.