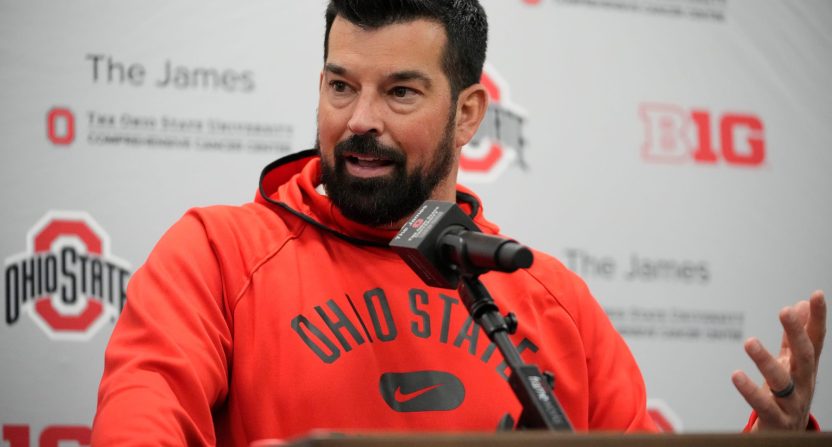 Some things in life are bigger and more important than football, and Ohio State head coach Ryan Day proved that alongside his wife Nina on Wednesday with the pair making a massive donation towards mental health and sharing an important message.

Ohio State University president Kristina Johnson announced on Wednesday that the two donated $1 million to the university to create the Ryan and Nina Day Resilience Fund at the Ohio State University Medical Center. The pair held an interview session and shared an important message to anyone struggling with their mental health, offering a reminder that “there is help out there.”

Ryan and Nina Day share a message for people who might be struggling with their mental health. pic.twitter.com/x3q0NvGqVl

“If you do break your leg, there’s a solution – to go in and get a cast and get it healed When you have a mental affliction, it’s similar,” Ryan Day explained. “It doesn’t seem similar, but it is. There’s a solution, there’s treatment, there’s different avenues that we can take to help treat those types of things.”

Ryan Day believes this more optimistic approach to dealing with mental health will help those who are struggling.

“I just think that approach is hopeful and not where you think there’s no answer. I think that’s really really important. There are resources and that’s what we’re working on.”

Nina Day echoed her husband’s thoughts, adding that there’s no shame in getting help for mental health concerns.

“I would just like to tell people, just like your physical health, we all kind of struggle with colds and COVID and broken ankles and all that,” Nina Day said. “Your brain is another organ in your body that can get sick, and not to feel shame if it does and feel empowered to ask for help.”

Ryan Day has been an advocate for mental health throughout his time at Ohio State. He has been open about his own mental health struggles as well as how mental health issues have affected his family, revealing that he lost his father to suicide when he was just nine years old.

Recently, one of Day’s players also made headlines for sharing his mental health struggles as former five-star lineman Harry Miller revealed that he was suicidal for a period of time while he played at Ohio State before seeking help.