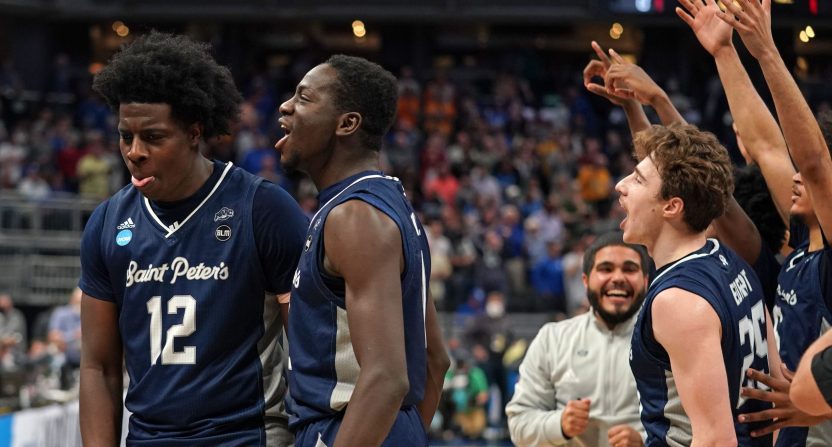 America loves an underdog especially when it comes to the NCAA Tournament. Upsets fuel the popularity of March Madness but not even the most skilled Hollywood screenwriter could have penned this latest Cinderella story.

You would be hard-pressed to find a more loveable longshot than Saint Peter’s. The No.15-seeded Peacocks (21-11) have shockingly become the face of this year’s college basketball postseason. We didn’t know their nickname (It’s the Peacocks). We couldn’t name their coach (It’s Shaheen Holloway). Heck, we didn’t even know the location of their campus (Jersey City, New Jersey).

Saint Peter’s doesn’t live in obscurity anymore. That all changed within a matter of days. You’re a big deal when Jack Harlow and Magic Johnson are tweeting about you.

Meet the newest heroes of March. Saint Peter’s reached the Sweet 16 for the first time in school history. They pulled off a sweep of the Commonwealth of Kentucky. First by upsetting the University of Kentucky 85-79 in overtime on Thursday and then by doing the same to Murray State, 70-60 on Saturday night. The Peacocks became just the third No. 15 seed to reach the Sweet 16, joining Florida Gulf Coast in 2013 and Oral Roberts in 2021.

Saint Peter’s advances to face the winner of No.6 Texas vs. No.3 Purdue. They’ll be closer to home this time with the East Regional semifinals being played in Philadelphia, just 90 miles from Jersey City.

A miracle for the small Jesuit school. Saint Peter’s toppled a Kentucky team that for a while looked like they were the best team in the country. Saint Peter’s vanquished a Murray State team that had the longest active winning streak in the nation (21 in a row).

Unbelievable. But believe it.

An amazing outcome for a school that initially didn’t bring cheerleaders or a band to Indianapolis. They did have cheerleaders Saturday night thanks to a little help from the streaming platform Peacock TV which footed the bill for an impromptu bus trip.

The victory over Kentucky put Saint Peter’s on the map. The triumph over Murray State keeps the Peacocks in our collective consciousness. How did this happen? How did the Metro Atlantic Athletic Conference champion shock the college basketball world?

One person offered up a clue.

Saint Peter’s also has a shooter with an assassin’s aim. Doug Edert might have a questionable mustache. However, don’t question his ability to bust your office pool bracket. He came off the bench to score 20 points against Kentucky. Against Murray State, the spark plug reserve poured in 13, including 10 in the second half. The Peacocks built a 13-point second-half lead and then hung on late to thwart a furious Murray State rally. They never trailed.

In the tournament, Edert is 9 of 13 from the field.

“I’ve got to give credit to my teammates for setting amazing screens and to bring great passes,” said Edert, a junior guard from New Jersey. “Good passes make good shooters, and the belief that my coaching staff has in me to take those shots and make them.”

Also, that mustache has made him one of the most recognizable faces of March Madness.

When the game was over, Clarence Rupert wept tears of joy. Fousseyni Drame and Hassan Drame kissed the Gainbridge Fieldhouse court. Celebrate a team that is as feisty as its coach.

“I’m going to say this,” Holloway said. “It’s going to come off a little crazy. I got guys from New Jersey and New York City. You think we’re scared of anything?”

SAINT PETER'S TO THE SWEET 16! THIS. IS. MARCH. pic.twitter.com/LLTuAqSCM7