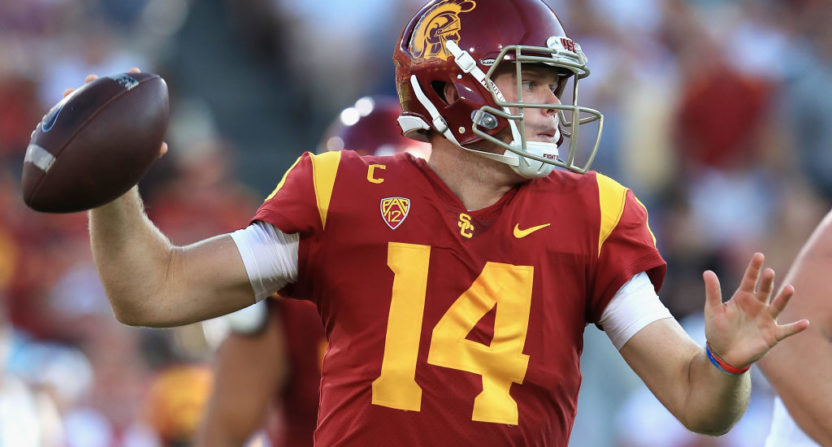 After Sam Darnold’s remarkable run to finish the end of the 2016 season, capped off with a historic Rose Bowl performance, the college football world thought Darnold would easily take the next step in 2017. The consensus was that Darnold would lead USC to the College Football Playoff, perhaps collect the Heisman Trophy along the way, and head into the 2018 NFL Draft as a clear favorite to go No. 1 overall.

After a disastrous Cotton Bowl, Darnold and USC’s season ended far short of where expectations pegged them to be. Most of that fell on Darnold, who turned the ball over more (22 times, including three Friday night) than any other player in FBS. He didn’t quite have the complement of weapons most thought he would, and his offensive line was by no means stout. But Darnold was supposed to be a franchise quarterback worth tanking a season for and after 2017, that’s clearly not the case.

If Darnold were to declare for the draft, he’d still be selected almost immediately, though not necessarily first overall. Every now and again, he flashes some of the talent everyone knows he has, and his ability to create magic out of seemingly lost plays is an inane talent very few QBs have in college. But some of his turnovers are Blake Bortles-esque, and that’s not what the Browns, Giants or anyone else is signing up for if they invest the future of their franchise in him.

As expected, Darnold didn’t commit to coming back to USC next season or declaring for the draft.

“Right now, I think I’m really just focused on just hanging out with my teammates for the next couple of days and really just saying bye to the seniors, because they’ve put together such a great season,” Darnold said. “But it’s tough.

“I’ll look at everything and make my decision after that.”

ESPN’s Kirk Herbstreit is one who believes Darnold may be better off spending another year with USC to iron out the kinks in his game. “He needs to come back for another year to continue to mature,” the analyst said. Herbstreit added that Josh Rosen is a better pro prospect as things stand right now.

There will be other draft observers and NFL executives who disagree, and there will certainly be teams in the NFL which will be salivating at the thought of taking Darnold now if the opportunity presents itself. But there are others who will see how he dealt with the adversity USC faced with personnel attrition and wonder if he will be able to succeed in their rebuilding situations? These turnovers won’t fly in New York with either the Giants or the Jets, for instance.

If Darnold goes into the NFL Draft this year, perhaps the best situation for him to be in is a developmental one, where he won’t have to immediately turn a franchise’s fortunes around in year one. Perhaps in Pittsburgh behind Ben Roethlisberger, should he play one more year, would be a promising situation for him. Or maybe the LA Chargers, who are in a similar spot as Philip Rivers enters the twilight of his career. Maybe the Saints would draft a QB to be Drew Brees’s heir apparent.

Maybe Darnold would be better suited with teams like Arizona, Washington and Buffalo, which already have pieces in place but perhaps could use a QB to put them over the top. He’d likely start right away in Arizona and Buffalo, but those situations aren’t quite those he’d face with the Browns, Giants and Jets, who face longer and more arduous rebuilds.

There is always a demand for QBs in the NFL, even in a year where more of them are seemingly available than ever. Teams are always clamoring for the answer at the position, and there are always one or two teams that take QBs surprisingly high, like Kansas City with Patrick Mahomes last year.

Darnold will undoubtedly be highly coveted if he declares, but he may not be the guy the world thought he would be after that sensational Rose Bowl. That comes with more risk for him, and the team that selects him.

There is no guarantee he’d be the guy in 2019 either, but more seasoning and development for someone who has the raw talent to be a franchise-defining signal caller is not going to hurt. The NFL will never stop salivating over prospects like Darnold.

For Darnold, there isn’t a clear-cut “right” answer to this dilemma. Going back to USC will not hurt his stock much, if at all (injuries aside), and will certainly make him a more polished passer while hopefully eliminating the head-scratching turnovers. But if he does leave for the NFL, he will be a very coveted prospect, though with the tape of a turnover-filled season following him around.

More players than ever are jumping to the NFL when given the chance. Darnold could be another in this line. But he could also buck these trends, and potentially benefit more in the long term for it.

But after a season in which most everyone thought he’d be the first overall pick in 2018, Darnold’s dilemma is one in which there is no right or wrong answer.