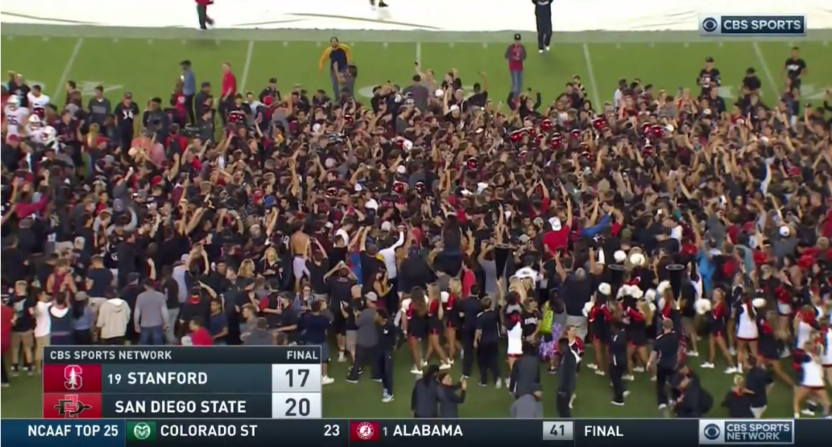 Earlier in the day, Memphis had scored a wild upset win over No. 25 UCLA in a landmark win not just for Memphis, but also for the American Athletic Conference. Roughly 11 hours later, San Diego State one-upped the Tigers by chopping down No. 19 Stanford, 20-17 (despite the lights going out for 20 minutes).

The win for the Aztecs firmly puts San Diego State in the driver’s seat for the New Years Six in the Group of Five race through three weeks, thanks to two wins against Pac-12 teams and, for now, the signature victory any Group of Five program possesses. And it was a much-needed win for the MWC on what was otherwise a brutal weekend of college football outside of a conference tilt between Boise State and New Mexico.

Although the schedule was a challenging one with games against four ranked teams, three of which were on the road against top 10 teams, the Mountain West going 1-7 and not even coming close to a win in a handful of those is an unfortunate blemish when it comes to the strength of schedule argument.

It’s one thing to have a challenging schedule, but being run over by it is something else few can come back from.

The most encouraging losses of the day — if such a thing exists — came from Colorado State and Air Force. Colorado State hung with No. 1 Alabama in Tuscaloosa for a little bit, but the Crimson Tide ultimately sent the Rams packing with a 41-23 defeat. It was the second time Colorado State has suffered a double-digit loss against a power conference opponent after a fun Week 0 victory over Oregon State. Air Force gave No. 7 Michigan a good tussle as well with their option attack, but the Falcons could only manage to keep it close for so long. The Wolverines pulled away in the second half for a 29-13 victory on the strength of their defense, which was too good to be fooled by the option for too long.

Fresno State and Utah State lost to No. 6 Washington and Wake Forest, respectively, on the road by 32 and 36 points.It was no better for San Jose State at Utah, with the Spartans going down by a score of 44-16. Wyoming quarterback Josh Allen completed just nine of his 24 pass attempts for 64 yards in a 49-13 home loss to Oregon. In two games against power conference opponents, Allen and Wyoming put up a combined 16 points and went 0-2.

And then there was Nevada, a program that is a far cry from the days when Colin Kaepernick was running the offense. The Wolfpack fell to 0-3 on the year with a 30-28 loss at home to Idaho State. This loss just a week after losing a game to Toledo from the MAC.

Making the Week 3 debacle even more troublesome for the Mountain West Conference is how some of the other conferences performed. The AAC had some tough losses, but South Florida finally looked like the South Florida that was expected to be seen this season in a decisive win against Illinois, and Memphis scored a 48-45 victory at home against No. 25 UCLA. The MAC even had Northern Illinois winning a game at Nebraska.

For San Diego State, the goal is simple. Take care of your business, win your games, and let the chips fall where they may at the end and see how it stacks up against other potential New Years Six contenders. Far too much football is still to be played and things can change very quickly in the Group of Five hunt. The Aztecs now have a small margin for error, largely because the conference as a whole has come up well short overall. Week 3 was great for San Diego State, but not exactly for the Mountain West Conference.