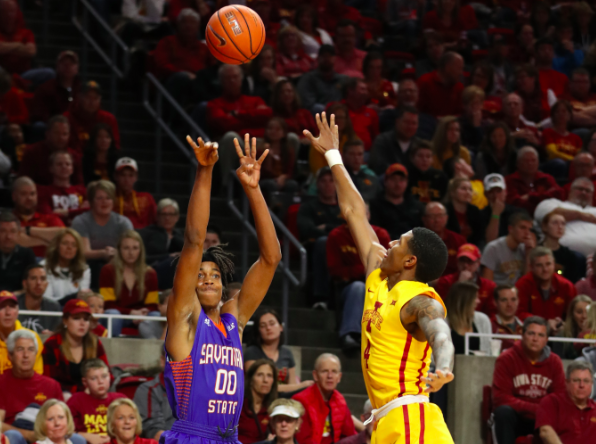 If you’re a fan of the long ball, you might want to consider becoming a fan of the Savannah State Tigers this season.

Led by the amazingly-named coach Horace Broadnax, the Tigers are nine games into the 2016-2017 season and have already taken 365 shots from three-point range. That’s 85 more than any other team in the nation. They’ve made 144 of them, too, which is 51 more than anyone else.

As Colt Kesselring reports writes for Hero Sports, Savannah State is on pace to match last season’s three-point totals by the end of December and they’ll break the NCAA record for three-pointers in a season (442 by VMI in 2006-07) by their 28th game of the year.

All of this shooting isn’t without merit. The Tigers are shooting .395 from beyond the arc, which is one of the better percentages. They’re also sixth in the nation in assist percentage (68.4). Their 88.6 points per game average backs up the value of the shooting.

Says Broadnax, “I really don’t criticize them for taking shots. I may ask them, ‘were your feet set? Did you feel comfortable? Were you rushed?’ We want to take every quality open shot we can get, and fortunately we’re making some of them.”

One thing all those three-pointers aren’t doing is leading Savannah State to victory. The Tigers are 2-7 so far on the season because whatever points they’re scoring, they’re giving right back  to the opposing team and then some. Opponents have gotten to triple-digits six times so far this year, including three teams that hit 110+ points.

To be fair, Savannah’s schedule is the real tiger. They’ve played Iowa State in Ames, Iowa in Iowa City, Memphis in Memphis, and San Diego State in San Diego. Things don’t much easier in the coming days as road games against Oregon State and Oregon loom.

Is there a method to all of this shooting madness? Remains to be seen. One wonders how an offense like this would do when matched with a defense that can stifle opponents and stay ahead? Also, it wouldn’t hurt to play a schedule more on your level. Perhaps that’s what we’ll find out when the Tigers start conference play.