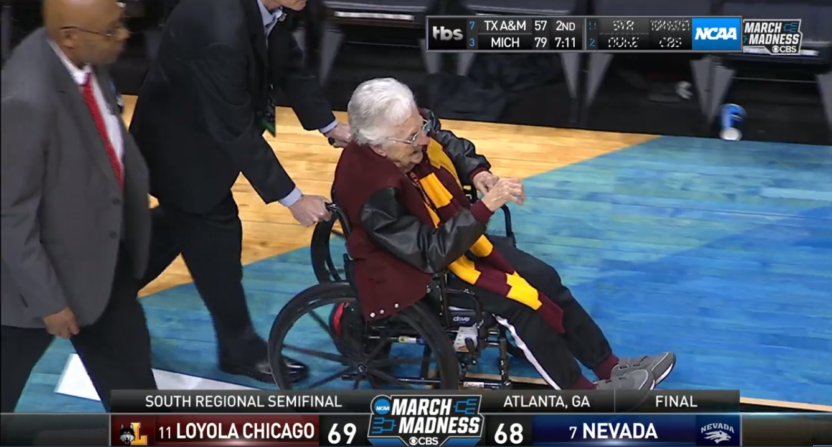 Sister Jean and the No. 11 seed Loyola Chicago Ramblers kept up their magic with a 69-68 victory over No. 7 seed Nevada in Thursday evening’s Sweet 16 action.

A couple hours later, the No. 9 Kansas State Wildcats pulled off a bigger upset by taking down the No. 5 Kentucky Wildcats.

Kansas State did that despite looking awful in their win over 16-seed UMBC in the second round, and despite having three players fouling out on Thursday, which forced them to play the final minutes without a guy over 6’4″.

Kansas State was a 0-7 vs. the teams in the Sweet 16, worst in the tournament.
They played 90% of the game without their best player, and 3 other players fouled out.
They played the last 5 mins without a player over 6-4.
They shot 15 fewer FTs, got out-rebounded and out-shot.

So here we are with a highly, highly improbable Elite Eight matchup: Loyola Chicago vs Kansas State.

In fact, this will mark the first time in NCAA Tournament history that an 11-seed meets a 9-seed in the Elite Eight.

And that of course means we’ll have an 11 or 9-seed in the Final Four. That number could grow to as high as three teams that are at least 9-seeds in the Final Four, with No. 11 Syracuse facing Duke on Friday night, and the No. 9 Florida State Seminoles pulling off an upset over the No. 4 Gonzaga Bulldogs on Thursday.

But this Loyola Chicago-Kansas State Elite Eight matchup perfectly shows how nutty the 2018 NCAA Tournament is. Here are some tweets about that matchup and one of the craziest tournaments we’ve ever seen:

Kansas State last made the Final Four in 1964.

Loyola Chicago last got there in 1963.

On Saturday they’ll play each other, an improbable 9 and an 11, and one will finally get back.

This 2018 NCAA Tournament is outrageous. And incredible.

The "unfairly stacked" East Region had …

And Loyola-Chicago will play Kansas State for a spot in the Final Four.

The CFB equivalent, per Massey Composite, is a 4-team playoff for a NCG spot with TCU, Boston College, Fresno State and Navy.

One of these teams will be playing for the national championship a week from Monday: Loyola Chicago, Kansas State, Florida State or Michigan.

I just have zero idea how we’re about to have both Kansas State and Florida State in the Elite Eight. More shocking to me than Loyola, to be honest.

Out of 17.3 million brackets on ESPN:

0.4% have Loyola-Chicago in the Elite Eight

1.4% have Kansas State in the Elite Eight

32% have Michigan in the Elite Eight.

Stunned. Kansas State vs. Loyola-Chicago for a trip to the Final Four Saturday in Atlanta. Stunned.

Those teams received a combined 6 preseason votes in the AP top 25 poll.

One of them will play for a national title.

Loyola Chicago and Kansas State will tip off at 6:09 PM ET on Saturday (TBS) for the right to go to the Final Four.