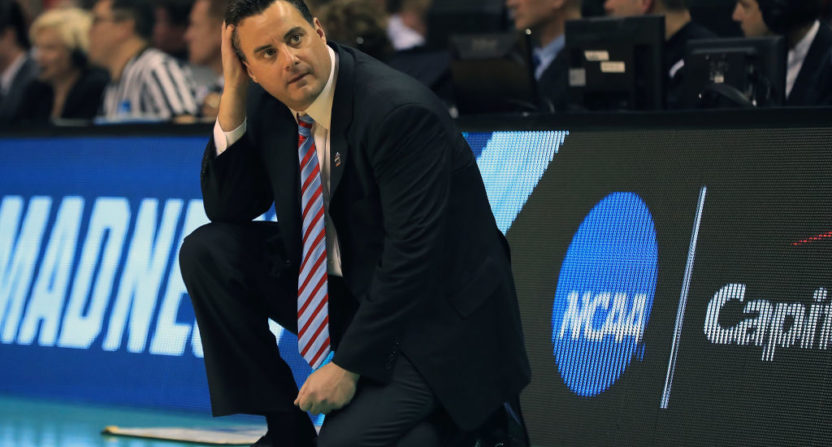 In a move that somehow manages to be both predictable and surprising, the University of Arizona “parted ways” with men’s basketball coach Sean Miller today.

It’s predictable given the years of NCAA and other investigations, not to mention sliding performance on the court. It’s surprising given the timing; Arizona essentially waited out the entire coaching carousel, with jobs at schools like Indiana, Texas, and Oklahoma vacated and filled in the meantime.

Miller was charged with head coach responsibility for failure to promote atmosphere of compliance. Administration stuck by Miller for 4 years.

Miller had been at Arizona for twelve years, making three Elite Eight appearances, with his last one coming in 2015. Miller never had a losing record, and only once (2018-19) did he have a losing record in Pac-12 play.

But the recruiting scandal that led to an FBI investigation was heavily focused on his program, with Arizona assistant Book Richardson arrested and eventually sentenced to prison time related to bribery and corruption.

Miller managed to avoid that, somehow, for years, maintaining his job and coaching the Wildcats through this season. Arizona self-imposed a postseason ban, though it wasn’t likely to matter this year anyway, and now Miller is out.

Waiting until now means Arizona may have missed out on some of the top names on the market, but it’s possible they wouldn’t have been in the running for them anyway. It’s clearly a top job in a vacuum, but with multiple level 1 NCAA violations hanging over the program (the actual penalties have yet to be levied) the uncertainty may have made it a tough jump for some.

Now, at least, they have much less competition; if a coach somewhere wants to make a move and/or wants to coach at Arizona, it’s pretty clear what the options are. That should probably work in the school’s favor, although they might have to be pretty up front with candidates about their impending sanctions. That they kept Miller on for years in the face of mounting evidence might not play well for them, meaningless postseason ban or not.

As for Miller, he’ll probably land somewhere else pretty quickly. It’s been a tough offseason for that coaching family, after his brother Archie was fired at Indiana (for strictly on-court issues.) Where and when Miller gets another position again likely depends on the eventual penalties; if he gets a show-cause, for example, he might have to take the Kelvin Sampson route as an NBA assistant for a few years.

The other lesson: had Miller kept winning at a very high level, he’d probably still have a job. Not an original lesson in the world of college sports, but an important one to note all the same.