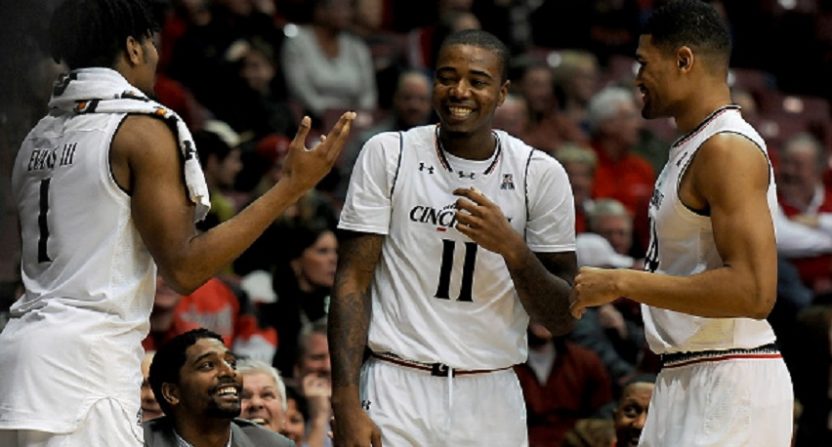 The happiest man in Cincinnati these days has got to be Mick Cronin. The 45-year-old basketball coach should celebrate with all the ribs he can eat at Montgomery Inn. Career victory No. 300 – achieved in last weekend’s rout of Tulsa – was sweet. The immediate future could be even sweeter.

Cronin is Cincinnati born-and-raised and is a University of Cincinnati alum. This means everything to him. After a decade of ups and downs, this might be the program’s best chance to return to the Final Four for the first time since 1992.

Watch out for Cincinnati (24-3, 3-1) this March. With a home victory over Memphis on Thursday, the Bearcats will be off to their best-ever start under Cronin.

“I talk to my players about what we have to do to make a run in March,” the coach said after earning that 300th win.

He added: “I know what wins games. I have been fortunate. I grew up with great coaches. I had my father, Jim Leon was the cream of the crop when I worked for him at Woodward (High School) and, obviously, Bob Huggins and Rick Pitino. I have been around what it takes to win.”

It’s a two-team race in the battle for the American Athletic Conference championship. The Bearcats are tied with SMU (24-4, 14-1) in the loss column. Their only league defeats are against each other. The Bearcats have four AAC games left – two at home. The Mustangs have three remaining with the final two at home.

Cincinnati has quality victories at Iowa State, home against SMU and Xavier. Because of the relative weakness of the AAC (it’ll likely only be a two-bid league), Cincinnati probably can’t rise past a No. 5 seed for the NCAA Tournament.

But as a No. 5 seed, it could do some serious damage.

Even if they lose here, no question this is Mick Cronin's best Cincinnati team. Also might be UC's best chance at a Final Four since '02.

These are not your father’s Bearcats. They’re not even your older brother’s. Cincinnati has had a long-standing tradition of being defense and rebounding dominant. But these Bearcats are different. This is – by far – the best offensive team Cronin has ever had.

That’s not an opinion. It’s a fact.

According to kenpom.com, the Bearcats’ offensive efficiency rating is No. 43 in the nation. Cincinnati had never been higher than No. 55 under Cronin and this would be its best mark since 2004-05 (No. 37). Last year, it was No. 69.

At least one former Bearcat thinks this team could make a deep run in the NCAA Tournament.

“The offense is there,” Terry Nelson told the Cincinnati Enquirer. “The leadership is there. The playmakers are there. But until they shore up their rebounding and low-post play, the jury is still out. In the NCAAs, it also takes some luck. Some guys have to get knocked off along the way. Some guys have to get hot at the right time.”

Cronin said the improved offense isn’t about strategy. He simply points out that he has better skilled players. The Bearcats were the preseason pick to win the AAC and were expected to be led by preseason co-player of the year choice Troy Caupain. The senior guard won’t win the award this year because he’s averaging 10.1 points on 39.9 shooting.

Guess what? That has hardly mattered.

Watching Cincinnati game, announcer says kyle Washington is the best player on the court, could still be at state with a different staff

“Trust me, I couldn’t be happier that he’s at Cincinnati,” Cronin said via gobearcats.com. “He does so much for our team I can’t possibly tell you how much he’s changed our team this year. Aside from his ability to score and get us baskets, his confidence is huge. He gives us confidence… and he is by far the energy giver on our team, which is a huge thing.”

Sophomore swingman Jacob Evans has been one of the league’s most versatile players. Evans has range (51 treys), swipes passes (35 steals) and makes plays (76 assists). Reigning Defensive Player of the Year Gary Clark is shooting 54.7 percent.

With all this talent, combined with a strong defense (No.11 in efficiency), Cincinnati figures to be a tough out for an opponent. Cronin has hung his hat on defense since he began his head coaching career at Murray State in 2003. He learned that from Huggins and Pitino.

When Huggins was ousted in 2006, Cronin got his dream job: coaching his alma mater.

It hasn’t been easy. The shadow of Huggins is always looming. He was controversial and popular. He established success and identity for the Bearcats. Cronin has been to the NCAA Tournament for six straight seasons, but has only the 2012 Sweet Sixteen to show for it. Meanwhile, Huggins took West Virginia to the 2010 Final Four and his current team looks like a contender.

This is a challenging time for Cincinnati. Conference realignment has it stuck in the AAC. Cincinnati, Connecticut and Memphis are proven basketball schools. But the league could be weakened if reports about UConn trying to reunite with the Big East are true. The Big East is thriving and one of the new members is Cincinnati’s crosstown rival Xavier. The Bearcats need to stay ranked and relevant to give them flexibility in any future conference changes.

Now would be as good a time as any for a run to the Final Four.