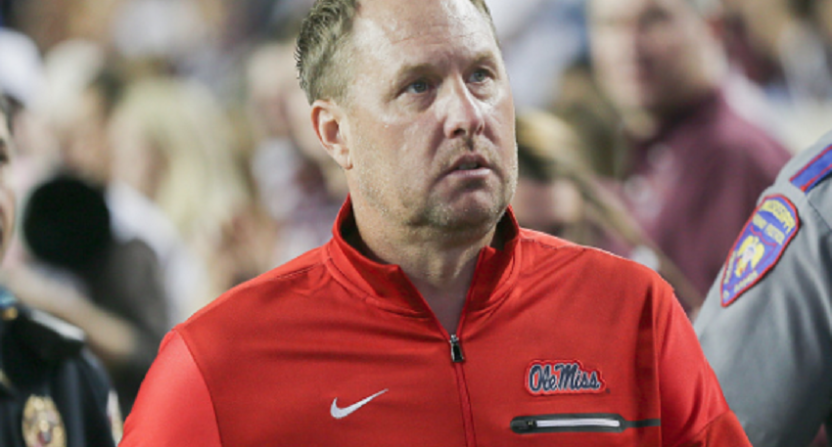 SEC Media Days are upon us. Or, more accurately, SEC media week. Coaches are offering sound bytes. This seems like the right time to assess how hot coaches’ seats are entering the 2017 season.

Below, they are ranked from hottest to coldest. There was not much turnover for 2017. There could be a lot entering 2018.

Hugh Freeze [Ole Miss] Oh, Hugh Freeze. He beat Bama twice. He stewarded two Top 20 finishes. That’s why he’s still employed with the looming NCAA sanctions. The Rebels crumbled last season, going 2-7 against Power 5 teams and losing the Egg Bowl by 35 in Oxford. Freeze likened his 2017 recruiting class to a de facto NCAA sanction. Freeze’s future depends on the magnitude of the bombs the NCAA drops on Ole Miss and him personally. Expect them to be substantial.

Kevin Sumlin [Texas A&M] Texas A&M runs like clockwork. Reel off early-season wins. Climb into the Top 10-15. Gas up the “swag copter.” Collapse — brutally — and finish the season with five losses. The Aggies have followed that script the past three seasons. Multiple five-star quarterbacks have transferred out. Sumlin’s Texas A&M last managed an above-.500 conference record during Sumlin’s first season in 2012. That may be the mark Sumlin needs to hit to stick around for 2018.

Butch Jones [Tennessee] Describe Butch Jones’ time in Knoxville in a word? “Uncomfortable.” Tennessee is 14-18 in the SEC under him. Better than before he arrived. Not where the Vols want to be. Recruiting has been great. On the field results and off the field scandal management? Not so much. Tennessee coughed up chances to win the SEC East the past two seasons. A late rivalry loss to Vanderbilt in 2016 cost Tennessee a Sugar Bowl trip. Patience has worn thin. Tennessee has a new athletic director. If the Vols don’t at least compete for a SEC title in 2017, the consecutive life championships won’t save him.

Gus Malzahn [Auburn] Malzahn brought Auburn to a BCS title game his first season. He has gone 11-13 in the SEC since. The culprit for much of the malaise? Malzahn’s offense and quarterback development. Jarrett Stidham, a talented dual-threat Baylor transfer, is eligible for this season. He could be Malzahn’s savior. But he’ll also raise expectations that Auburn will be a darkhorse SEC title candidate (and make it more devastating if the Tigers are not). Remember. We’re discussing Auburn. Gene Chizik was canned two seasons after a national title. Terry Bowden and Tommy Tuberville both had undefeated seasons on their resumes before being let go.

Barry Odom [Missouri] Mizzou went 4-8 during Odom’s first season. Two of the wins came against Eastern Michigan and Delaware State. Missouri did get better on offense. They also had a stunning decline in defensive efficiency. The Tigers getting back to stocking the line with future NFL pass rushers would be helpful. Odom has strong ties to the school. He is an alum and a longtime assistant. It’s hard to see him not getting at least a third year. But, Missouri has a new athletic director. A third straight losing season and the school’s broader troubles may wreak havoc on fund-raising. Odom was a cheap hire, which also means he’d be cheap to fire if Missouri thinks it can do better.

Mark Stoops [Kentucky] Mark Stoops had a brutal opening two weeks. The Wildcats lost to Southern Miss and were pounded by Florida. It looked like Stoops may not last through the season. Then, Kentucky won seven of its last 11 (including a Louisville upset) to reach their first bowl game in Stoops’ fourth season (and first since 2009). That finish and a substantial buyout get him some leeway entering 2017. Check back in if Kentucky takes a significant step backward.

Derek Mason [Vanderbilt] Vanderbilt made significant progress in 2016, finishing 6-6 during the regular season, upsetting Tennessee, and reaching a bowl game. Things are looking up. The Commodores were not that far off competing in the SEC East last season. But they were even less far off from starting 1-5 and putting Mason’s job in jeopardy. Vandy has played very well defensively under Mason, a former defensive coordinator. They need to play offense better. A substantial leap forward in 2016 got them to 89th in the S&P+ rankings. We’ll see how long that goodwill lasts if Vanderbilt slides.

Bret Bielema [Arkansas] Raw numbers suggest Bielema should be on the hot seat. But Arkansas has an entrenched, even-keeled AD in Jeff Long, who made Bielema his guy. Results, however, have to come at some point. Bielema’s teams have been competitive. Yet even granting him a complete pass for 2013, he’s just 10-14 in the SEC the past three years. The best team he produced still lost to Toledo at home. Arkansas isn’t the best SEC West job. But it’s a job where his two full-time predecessors Houston Nutt and Bobby Petrino produced double-digit win seasons. Bielema may be a situation to watch if Arkansas does not reach a bowl game.

Will Muschamp [South Carolina] Muschamp was on the hot seat from day one after the way his Florida tenure ended. 2016 was neither beautiful nor delicate. South Carolina had the SEC’s worst offense. But the Gamecocks somehow scraped together six wins to reach bowl play and hung with a ranked USF team when they got there. South Carolina’s athletic department invested a lot of capital in Muschamp. He will get the time to rebuild. A 2017 departure isn’t likely.

Dan Mullen [Mississippi State] Mullen has been better in Starkville than his raw record indicates. It’s a constant uphill battle. Crushing Ole Miss in Oxford put a cherry on top of a turd of a 2016 season. Mullen appears to have a promising quarterback prospect in Nick Fitzgerald. Mississippi State can afford a more long-term perspective than Auburn. Mullen more than deserves some leash. But things could get off the rails next season with LSU, at Georgia, and at Auburn before September ends.

Ed Orgeron [LSU] The Tigers whiffed on Tom Herman. They opted for charismatic continuity by keeping Coach O. Many will root for him. It’s not clear whether he’s the long-term answer or the long-awaited leader that will close the gap with Alabama. Orgeron went 3-21 in the SEC at his last permanent head coaching job. With a running game and defense, LSU is set up for a certain level of competence. That and a $12 million buyout after 2017 should get Coach O to 2018. Beyond that is anyone’s guess.

Kirby Smart [Georgia] Smart did not have a banner first season. Narrow escapes against Nicholls State and Missouri kept it from looking a lot worse. It was a season that would have gotten Mark Richt fired had he not left the year before. That said, there’s ample room for Georgia to grow with Jacob Eason. Smart brought in a monster 2017 recruiting class. He will get two to three years at least to make “the process” work. The message boards may get heated if the Bulldogs lose in South Bend.

Jim McElwain [Florida] McElwain inherited a trash fire of an offense. He’s handled that more deftly than he did shark-gate. Rebuilding has been slow and painful to watch. But the Gators are 13-3 in the SEC over his two seasons. They have made two trips to Atlanta for the SEC title game. Improvement is a must. McElwain is straddling the Zook/Muschamp and Spurrier/Meyer levels. But he will get time to develop a quarterback, and few are expecting that to happen right away this season.

Nick Saban [Alabama] Nick Saban has $65 million left on his deal to orchestrate an extracurricular activity at a public college. It’s hard to see a realistic scenario, short of an Art Briles-level scandal, where Saban’s job would be at risk.