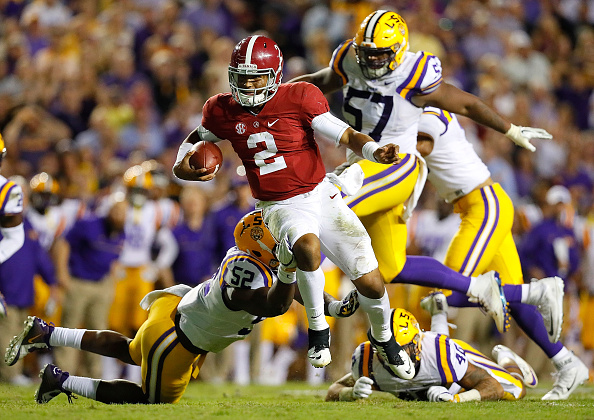 The Comeback’s conference previews wrap up this week with the SEC. I’ll kick off our position previews by taking a look at the league’s quarterbacks. Here’s everything you need to know about the top signal callers in the SEC.

Q. Who are the top returning quarterbacks in the SEC?

3. Danny Etling, LSU – Etling was one of the more efficient quarterbacks in the league last year. He completed 59.5% of his passes and averaged 7.9 yards per pass attempt last season. Even though there are players in the league who posted better numbers, I’ve got Etling on this list because of what he meant to the LSU offense. After all, the Tigers were a completely different team with him under center. His ability to stretch the field prevented opposing defenses from loading the box to take away the Bayou Bengals’ vaunted ground game. That will be something that new offensive coordinator Matt Canada will take advantage of this year.

2. Austin Allen, Arkansas – Statistically speaking, Allen is the top returning triggerman in the league. He led the SEC in passing yards, yards per attempt, and passing plays longer than 10 yards last season. He was also solid in the red zone, throwing for a league-best 19 touchdowns in those situations. Allen was at his best in conference play, eclipsing the 300-yard mark four times, including a 400-yard effort against Alabama. About the only thing Allen struggled with last year was throwing interceptions, but that’s not uncommon for a first-year starter. Look for him to cut down on the picks this fall, and to push for all-conference honors.

1. Jalen Hurts, Alabama – Every offense needs a quarterback like Jalen Hurts, who can beat opposing defenses in a number of different ways. He proved that he could get the job done as a passer by throwing for 2,780 yards and completing 62.8 of his throws with an impressive 23/9 TD-to-INT ratio. Yet he can also run the ball when the situation calls for it, rushing for 954 yards and 13 touchdowns. While the numbers above are impressive, it’s worth noting that he posted them even though Saban said Alabama didn’t do enough to develop Hurts as a passer. Given that Alabama spent most of the spring working on becoming a more balanced offense, you can count on his passing numbers to be even better in 2017.

Q. Which quarterback will have a breakout season?

Although there are a number of players who would fit this category, I’ll go with Missouri’s Drew Locke. That’s not to say that Locke had a bad year in 2016. He didn’t. In fact, he led the SEC in passing yards per game and tied for third in touchdown passes. However, he did struggle at times last season, especially against LSU (17 for 37, 1 INT) and Florida (4 for 18, 2 INT). Yet Locke closed out the year strong, throwing for 294 yards against Vanderbilt and 268 yards (10.3 yards per attempt) in an upset over Arkansas. With a veteran offense (10 returning starters) coming back this fall, there’s no reason to think that Locke won’t pick up where he left off in November – when he threw for an average of 296 yards per game.

The player that I’m watching closely is Auburn quarterback Jarrett Stidham, who might be the best signal caller in the league this year. He played well when given the opportunity at Baylor, completing 75 of 109 passes for 1,265 yards (11.6 yards per attempt) with a 12/2 TD-to-INT ratio before a broken ankle curtailed his season. He also went 2-0 in road starts that year, guiding the Bears to victories over Kansas State and No. 20 Oklahoma State. Although he sat out last season as a transfer, the last two sentences demonstrate that he has what it takes to be a successful quarterback in this league. Expect him to have a big year for the Tigers and to have the team in contention for the SEC West title.

Q. What is the most intriguing quarterback situation in the SEC?

I think it’s the quarterback competition at Florida. Unlike seasons past, there’s a wealth of talent at the position. Luke Del Rio looked sharp in his first three starts last year, and guided the team to a 5-1 record as the starter. Yet Feleipe Franks had a great spring, and is currently working with the first team. They’ll both be pushed by Malik Zaire, who showed flashes of brilliance at times during his career at Notre Dame.

Is Del Rio healthy? Even if he is, will Franks take over as the starter or will he wait for his turn behind Zaire? Or will something unexpected happen?

I don’t know the answer, but I can’t wait to see it unfold on the gridiron. Opening weekend cannot get here soon enough!