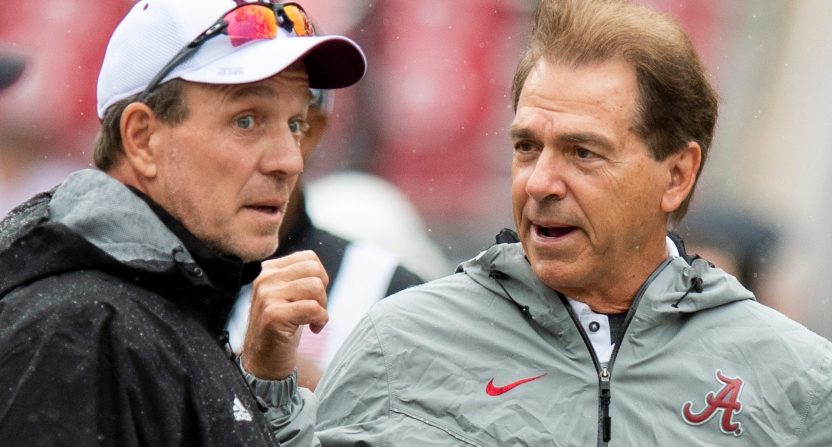 Ever since Nick Saban lit the fuse on a recruiting argument and Jimbo Fisher poured gasoline on it, college football fans have been eagerly anticipating the upcoming SEC Spring Meeting when the two rival coaches will have to be around one another.

On Tuesday, we learned just how close the Texas A&M and Alabama head honchos will be when all of the football coaches are seated together for their annual meeting.

Radio host Pat Smith shared the seating chart on Twitter, showing how Jimbo is seated with SEC officials on both sides of him while Saban is off to the side, ensuring that the two won’t be staring one another down all day.

The most anticipated tweet about SEC Spring Meetings. The Football coaches seating chart! Interesting that Jimbo is flanked by SEC officials. pic.twitter.com/KZF1FFl80H

Many folks pointed out that it’s interesting that Fisher is the only coach flanked by SEC officials, though it was soon noted that Jimbo is the chair of the committee this year, so it’s natural that he would be sitting with league personnel.

Or it could be as simple as Jimbo being chair of the football coaches group this year https://t.co/CG0gCGwdgR

Still, speculation is going to run rampant in the meantime as football fans wonder how it will go with Fisher and Saban are face-to-face for the first time since their very public battle. Saban has since apologized for accusing Fisher and Texas A&M of cheating through NIL deals and other means, but it appears the damage is done as far as Jimbo is concerned. The conference reprimanded both coaches over derogatory comments and public criticism of fellow conference members.

While we wait to hear more about the fireworks ahead, the college football world offered plenty of fun reactions to the seating chart, including one of the coaches who will be across from Jimbo.

Imagine trying to explain to someone why Jimbo is surrounded by SEC staff and Lane Kiffin isn't https://t.co/xlL4iBOF4z

This is the May content we all need. https://t.co/XxiNdDHB64

Update: Brian Kelly has been moved to the top of the table in the middle of the room for dancing purposes. https://t.co/nDoZdnDrqO

I realize it’s just alphabetical by school besides Jimbo being where he is but still 10/10 https://t.co/9JXk9jAIs7