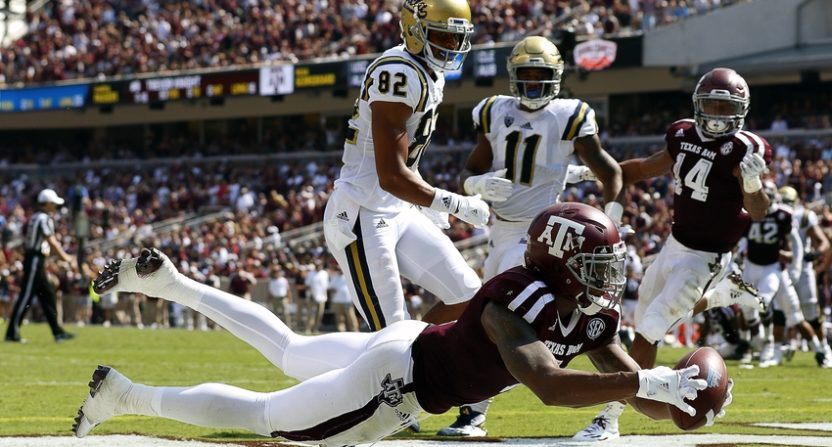 As a compromise, I’m basically only going to judge SEC schools relative to each other. However, in order to give a schedule a really good grade overall, it has to be one that can match up well against even a Pac 12, Big Ten, or Big 12 OOC schedule.

We came within one game of seeing Nick Saban vs. Jimbo Fisher in the inaugural season of the College Football Playoff, but the two will finally meet in one of the biggest games of 2017.

Sept. 2, vs Florida State (in Atlanta, GA)
This is the best non-conference game of the year. College football is better for it. If only Alabama played another decent team out of conference.
Grade: A+

Sept. 9, Fresno State
These are not the Pat Hill Bulldogs of a decade ago, who played any big school and sometimes stayed competitive. Fresno is down as a program right now and wouldn’t challenge any SEC team, let alone Alabama.
Grade: D

Sept. 16, Colorado State
Okay, I’ll slightly retract my earlier statement. Colorado State probably is a decent team this year. The offense exploded in the latter half of 2016 and has the potential to win a bunch of games this year. Still, there are plenty of better schools than Colorado State for Alabama to play.
Grade: B-

Nov. 18, Mercer
Alabama will prep for the Iron Bowl by beating up on a team that is mediocre by FCS standards. At least last year’s November cupcake was a ranked FCS team.
Grade: F

Overall:
Nick Saban recently made comments about wishing he’d play all Power 5 teams in the non-conference. It seems to me like he’s trying to earn brownie points for talking the talk while not putting those statements into practice. Plenty of SEC teams play two Power 5 teams. Others play one plus a perennially-strong Group of 5 team.

Alabama might luck out in Colorado State being a Mountain West contender (and I say “might” because right now the Rams are probably a few steps behind both Boise State and Wyoming in the Mountain Division), but this schedule is really not befitting a Playoff contender.

It will get all the talking points from the pundits and even the committee because of the amazing opening game (and Alabama deserves full props for playing it), but this is not a great schedule overall. There are two true cupcakes, and the second-best game is against a Group of 5 team that should consider 8-4 a successful season.
Grade: B-

Sept. 2, vs FAMU (in Little Rock, AR)
If this was a mascot battle, it would be close between a rattle snake and a razorback. That would certainly be a more competitive matchup.
Grade: F

Sept. 9, TCU
Arkansas won its road game in this home-and-home and now TCU will try to repay the favor. This is a good series reviving an old SWC rivalry that I hope we can see more of in future years.
Grade: A

Sept. 30, New Mexico State
The Aggies will spend their final year in the Sun Belt as underdogs in most of their games. Arkansas gets a cupcake to follow its first SEC game.
Grade: D-

Nov. 4, Coastal Carolina
Arkansas got its FCS team out of the way opening weekend, so it will play its November cupcake against a team transitioning to FBS. Both wins against FAMU and Coastal Carolina will count for bowl eligibility.
Grade: D-

Overall:
Three true cupcakes and a P5 game against a team that had a losing record last year. (Okay, that was misleadingly snarky; TCU is a quality nonconference opponent, last year’s struggles notwithstanding.)

This is a very weak nonconference schedule that does nothing but rob Razorbacks fans of 42% of their home games. Season-ticket holders will feel very let down by this, I’m sure. And if Arkansas manages to somehow win the SEC West (or at least do very well), this schedule will do it no favors when the selection committee starts to dissect resumes.
Grade: C

Sept. 2, Georgia Southern
The Eagles looked good when they first transitioned to FBS, but have been trending downwards since. Still, it’s never fun to open the season against a triple-option team, especially a Group of 5 one that had good success relatively recently.
Grade: B-

Sept. 9, @Clemson
Clemson might have lost a lot, but this is still a true road game against the defending national champions.
Grade: A+

Sept. 16, Mercer
Auburn follows up Clemson with an FCS game. It’s understandable; Clemson hits hard and Auburn could use a light week to follow it.
Grade: D

Nov. 18, Louisiana-Monroe
ULM upset Alabama a decade ago, so the Warhawks can’t be a full cupcake, right? Right?
Grade: D-

Sept. 2, vs BYU (in Houston, TX)
BYU isn’t a P5 team, but is a strong program that could definitely win ten games this year. The Cougars always play tough against good teams, and this should be a decent opening test for LSU.
Grade: B+

Sept. 9, UT-Chattanooga
Remember when the Mocs led Alabama at the end of the first quarter last year?
Grade: F

Sept. 23, Syracuse
Syracuse’s struggles have made this home-and-home something lackluster, but it had potential when it was scheduled. It didn’t pan out, but that’s the risk of scheduling games years in advance. Besides, Syracuse returns a lot of talent this year and Dino Babers is an offensive wizard. I want to see what he can do against this LSU defense.
Grade: B

Sept. 30, Troy
The Trojans were once the flagship program of the Sun Belt. In fact, Troy nearly upset the Tigers in both of their meetings last decade. The Trojans are no longer what they once were, but this is still a talented program that can’t be taken entirely for granted.
Grade: C-

Overall:
There is only one true cupcake on this schedule. It doesn’t have the high-profile top game that Alabama and Auburn have (though BYU has a sneaky chance to be a New Years Six contender), but it’s better overall. 4-0 is the likeliest possibility here, but three of these games are losable if LSU isn’t at its best. That’s only really true of one game for both Alabama and Auburn, and that’s why LSU gets a better grade, even without the great top-end game.
Grade: B

Sept. 2, South Alabama
The Jaguars are a middle-of-the-pack Sun Belt program, but are trending in the right direction. They also beat an SEC school last year, so they’re not a total cupcake.
Grade: C-

Sept. 9, UT-Martin
Following a likely cupcake with an FCS school is an odd way to start the season.
Grade: F

Sept. 16, @California
Cross-country road trips against Power 5 opponents will never be mocked by me, even when that opponent is Cal.
Grade: A

Overall:
I have no idea how to treat Ole Miss. This schedule was made by a team expecting to be a Playoff contender, even with an NCAA investigation beginning to cast a shadow. As such, this schedule is incredibly weak. On the other hand, the Ole Miss program is currently in turmoil and needs all of the easy wins it can get.

Still, there are three games on this schedule expected to be cupcakes. If we don’t let Baylor get away with that, why should we let Ole Miss? The 3,000-mile road trip does make it more palatable, I’ll admit. That’s something no P5 team gets from its ninth conference game.
Grade: B

Sept. 2, Charleston Southern
A program known for its weak nonconference schedules, the Bulldogs kick the season off against an FCS team.
Grade: F

Sept. 9, @Louisiana Tech
A trip to Ruston is always dangerous. In my book, a road game against a good Group of 5 program is just as good as a Power 5 game.
Grade: B+

Oct. 14, BYU
This game bothers me in abstract, even though I’m perfectly happy to count BYU as a solid opponent for anyone to play. In 2014, the SEC made a rule that all of its members must play at least one Power 5 team out of conference–with independents counting as P5. The following year, Mississippi State scheduled this home-and-home in order to comply with this rule. It’s a good series against a good team, but it rubs me the wrong way that the Bulldogs couldn’t/wouldn’t find a Power 5 program to meet this requirement.
Grade: A-

Nov. 4, UMass
UMass, as an independent, also would technically fulfill the conference’s rule. Then again, if Mississippi State claimed it was playing UMass to beef up its nonconference schedule, the league would probably revise its independents rule real fast.
Grade: D

Overall:
There are no P5 schools on this schedule, but I’m okay with that. Two games against good opponents is more than some other SEC West schools are doing.
Grade: B-

Sept. 3, @UCLA
This is the return trip of a great game that went to overtime in College Station last year. This series looked strong when it was scheduled, and it hasn’t disappointed yet.
Grade: A+

Sept. 16, Louisiana
ULL made a bowl last year and didn’t get completely embarrassed by Georgia, so maybe Texas A&M is hoping the Ragin’ Cajuns won’t be viewed as a total cupcake?
Grade: D+

Nov. 11, New Mexico
The Lobos under Bob Davie are not the FBS doormat they once were (Davie never gets enough credit for the absolutely incredible job he has done there). Unfortunately for Texas A&M, this game was scheduled before the 2013 season, at a time when New Mexico was averaging about one win per year. It is hard to imagine the Aggies expecting anything other than a guaranteed easy victory from this game.
Grade: D

Overall:
There’s a trend in the SEC West. Contenders in this division play one high-profile great non-conference game, only to follow that up with three complete cupcakes. This used to be pretty standard in college football, but thankfully the sport has moved away from this model.

The SEC West seems to be the only holdout — when you compare this division’s non-conference schedules to even the SEC East’s, you see a world of difference. The SEC West champion is expected to be a Playoff contender every year, and it is incredibly disappointing to see three expected automatic wins on the schedules of just about every team that has a chance to win the SEC West.