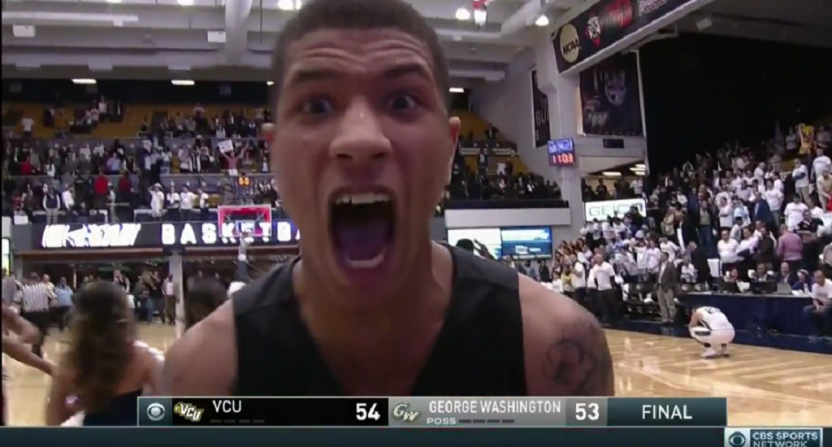 We shared the story on Saturday of VCU beating St. Bonaventure 83-77 in overtime, after it appeared the Bonnies won the game in regulation on a three at the buzzer. And everyone in Reilly Arena thought the game was over, which led to fans storming the court.

Well, after the refs reviewed the play, it was determined that 0.4 seconds were left, and St. Bonaventure was issued a technical foul due to their fans storming the court. VCU made the technical foul free throw and tied the game to force overtime, and then won the game in overtime.

Fast-forward to Wednesday night, with VCU playing at George Washington.

VCU was up 62-60, when George Washington’s Yuta Watanabe drained a three that appeared to end the game and give the Colonials a 63-62 win at the buzzer. The George Washington players all celebrated like the game was over, and you even see CBS Sports Network having the game as “Final” on their score graphic:

So VCU got the ball with 0.4 seconds left, but with the hoop on the opposite side of the floor. It was going to take a miraculous shot or being bailed out by a foul, and the latter happened. VCU’s JeQuan Lewis drew a charge on the inbounds pass without any time running off the clock:

Lewis then went to the line and hit what would serve as the game-winning free throws:

So, it appeared that VCU had lost consecutive games at the buzzer, but won both games despite trailing with 0.4 seconds left. And thanks in large part to fans rushing the court and a charge 90 feet away from the hoop. Amazing.