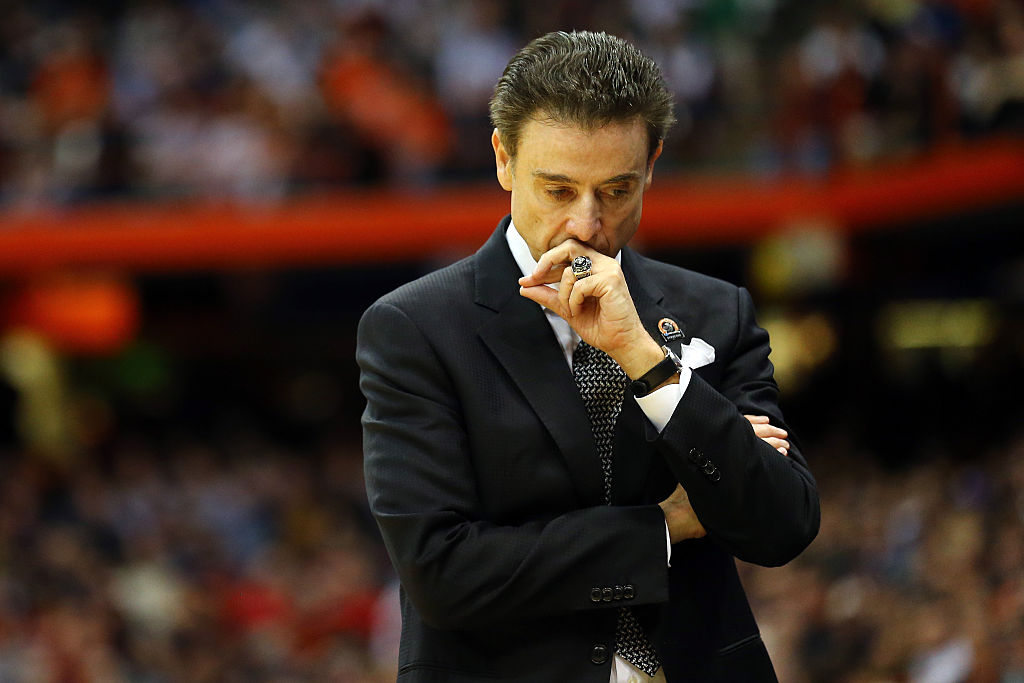 Louisville basketball sits at 5-1 this season after a heartbreakingly close loss at Michigan State on Wednesday that still have the Cardinals looking like a team that can compete with anyone in the country. That’s part for the course for this program under coach Rick Pitino, who is just three years removed from a national championship.

But there is an uneasiness around the Louisville program as potential NCAA sanctions threaten to derail the program in the very near future. A former escort claims that she and other dancers had sex with and danced for Louisville recruits under the request of former Cardinals assistant coach Andre McGee. Pitino claims to have no knowledge of the situation, but as the person in charge of the basketball program, he’s likely to be held responsible by the NCAA.

This is a rarity from an NCAA standpoint — a school being punished for using sex or sex appeal to recruit players. But in reality, women are commonly used in the recruiting practice across college sports, and the NCAA has consistently turned a blind eye.

“If you look at the NCAA and you look at the 1,500 pages of the recruitment manual, what the NCAA basically said is it’s up to individual universities to come up with their own policies that they then have to uphold,” said Jessica Luther, a journalist who is writing a book on sexual assault in college football. “There is literally nothing that says, ‘don’t use sex in recruitment.’ I think most people think that exists, but it doesn’t.”

The result? A culture in which the safety of women — and their role on campus — is put in jeopardy by athletic department officials who are simply looking to win. And as a recent study found, violent gang rapes are particularly prevalent among college athletes, who are part of a “culture that promotes hyper-masculinity, [and] sexual aggression — a culture promoted when coaches and athletic departments essentially tell players that women are there for them.

“When (a player) thinks they have access to pretty women … they view and are trained in some instances to think women are there for them,” said Title IX lawyer Tom Newkirk. “It’s already bad enough when men come on campus.”

While what happened at Louisville is an extreme example, but because many other examples within college sports that are still very concerning, even if not quite as jarring as prostitution.

Schools across the country, particularly in the South, have been known to have hostess programs, designed specifically to lure in recruits with attractive women. Tennessee, for example, described its now-defunct Orange Pride hostess program as “a group of students whose primary duty is to promote the University and its strong academic programs, rich traditions, and winning athletics program to campus visitors and potential student-athletes.” They weren’t even hiding its purpose.

Hostess programs that include only women are technically banned by the NCAA, but they still exist across the country, as 247Sports recruiting writer Barton Simmons told The Tennessean:

“Almost any school will use a friendly girl — like a volunteer or intern or whatever — that can kind of be a guide,” said Barton Simmons, director of scouting for recruiting website 247Sports.com.

Hostesses would hang out with and flirt with recruits, but beneath the surface, they were used to do more: The point was to essentially make a recruit think he had a girlfriend on campus — one girl who was specifically owed to him.

Former Orange Pride captain Lacey Earps said one former recruit, Bryce Brown, was assigned to her by coach Lane Kiffin because he had such an attachment to her. From a book about the process:

Tennessee’s only punishment was three years of probation from the NCAA, and that’s mostly due to the fact that Kiffin gave hostesses money for expenses. When money isn’t involved, the NCAA seems uninterested.

The retort to all of this is that Earps wanted to hang out with Brown, and perhaps that is true, but it is also not a problem. The problem is when athletic departments create a culture that could be dangerous to women in the future.

“I always try really hard not to pass judgement on the individual actors, especially women, who may want to have sex with football players,” Luther said. “Of course. That makes sense to me. I’m more interested in the athletic department officials who are approaching this whole thing in a strategic way.”

In some instances, the danger is more direct than being simply the creation of a sexist culture. At Vanderbilt, two players were convicted of raping a woman they may have known from athletic department-sanctioned contact. Coach James Franklin allegedly contacted the victim after the rape, according to court filings, because “they cared about her because she assisted them with recruiting.” Franklin also allegedly tried to get her to set up an informal hostess-type program, according to those documents:

“Coach Franklin called her in for a private meeting and told her he wanted her to get fifteen pretty girls together and form a team to assist with the recruiting even though he knew it was against the rules. He added that all the other colleges did it.”

Franklin has repeatedly stated that he did “nothing wrong,” and in the eyes of athletic departments and NCAA officials, that may be true. But the question is whether that attitude toward women is hurting women on campus, as a whole, by contributing to the idea that women are “owed” to men. The Comeback asked Franklin this question, and he tersely rejected it: “Next question, please,” is all he said.

“Is there something wrong with having a pretty girl be part of your recruitment team because you think it might make him want to come here because he likes pretty girls?” Newkirk said. “I don’t know. I think it’s wrong. I think it makes women sexual objects.”

Women can help get players, getting players leads to more wins and wins make more money. Considering what is at stake, it should be no surprise that the programs set up at Tennessee, Vanderbilt and even Louisville are set up by coaches, and in some cases, endorsed by athletic departments.

The undiscussed dark side is the consequences this culture has for women on campus. It’s a culture that needs to be changed, but given the stakes of major college athletics, it’s one that doesn’t appear to be changing any time soon.

“I don’t really know what the policy should look like, just that they shouldn’t allow it,” Luther said. “On some level, I think we can say, pretty definitively, whatever policy exists is lacking.”