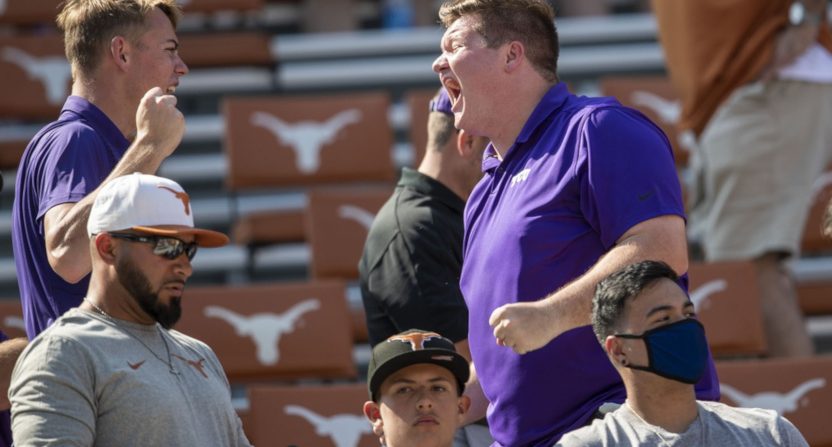 The 2020 college football season has understandably been rather different than normal thanks to COVID-19, with some conferences opting to not play, some playing only in-conference games, and some reversing decisions from not playing to playing. But Saturday of “Week 5” (which was only Week 2 for the SEC, and a varying week for other schools) stood out even in an already-strange year, seeing six Associated Press Top 25 teams losing to unranked opponents (with five of those losses coming at home). Here’s a breakdown of those games.

TCU 33, No. 9 Texas 31: The Longhorns had started the season decently with a 59-3 out-of-conference dismantling of UTEP, but they needed overtime last week to edge unranked Texas Tech 63-56. That didn’t hurt their AP poll ranking, but this week’s home loss to the unranked TCU Horned Frogs (who began their own season with a 37-34 home loss to Iowa State last week) certainly will. And it was yet another recent victory for TCU in this series; while the Longhorns are 63-27-1 all time against the Horned Frogs, most of those wins came a long time ago. Before TCU joined the Big 12 in 2012, the schools’ last regular meeting was in 1995 (they did play a one-off game in 2007, which Texas won). And since 2012, the Horned Frogs have now gone 7-2 against the Longhorns, with Gary Patterson (TCU’s head coach since partway through the 2000 season) at the helm for all of those wins (including a current two-year streak).

Interestingly enough, though, this win very nearly wasn’t. Trailing 33-29, Texas drove the ball all the way to the TCU one-yard-line inside the final three minutes, but running back Keontay Ingram (who had just picked up 52 yards on a reception) fumbled and turned the ball over:

Keaontay Ingram fumbles near the goal line to give it back to @TCUFootball with 2 minutes left in the 4th. pic.twitter.com/OjGRG8g5rI

That still didn’t ensure a win given how backed up TCU was, but an eventual nine-yard run from Taye Barber on third and seven gave the Horned Frogs the first down they needed to kill the clock. And that led to TCU quarterback Max Duggan taking a deep snap with six seconds left and then conceding a safety with no time on the clock, making the score a little closer, but ensuring the Horned Frogs’ victory.

On the day, Duggan completed 20 of 30 passes (66.7 percent) for 231 yards with no touchdowns and no interceptions, while Texas QB Sam Ehlinger was held to 17 completions on 36 attempts (47.2 percent). Ehlinger did throw four touchdown passes, but he also threw an interception. So even the Longhorns’ cardboard Matthew McConaughey section would have to admit this was not all right, all right, all right.

No. 18 Oklahoma 30, Iowa State 37: Speaking of the Big 12, their third-ranked team (No. 17 Oklahoma State won 47-7 at Kansas) also took a major loss. After falling 38-35 at home to Kansas State last week, the Oklahoma Sooners lost again, this time on the road against the Iowa State Cyclones. Iowa State running back Breece Hall scored the winning touchdown on an eight-yard carry with 4:06 left, and while the Sooners had chances to come back after that, their final drive ended with the Cyclones’ Isheem Young picking off Spencer Rattler in the end zone.

Tulsa 34, No. 11 UCF 26: This was a brutal loss for the Knights, breaking their 21-game home winning streak. It was their second-straight loss to the Golden Hurricane (Tulsa won this matchup 34-31 at home last November), and it was one that really took down one of the most prominent teams outside the Power Five conferences. However, the Golden Hurricane might have their own claim for some recognition soon; their only previous game (thanks to last week’s clash with Arkansas State being postponed thanks to a Red Wolves’ COVID-19 outbreak) was a 16-7 road loss to Oklahoma State, a team which, as mentioned above, is doing pretty well these days.

At any rate, this was a nice win for Tulsa, led by Zach Smith completing 17 of 29 passes (58.6 percent) for 273 yards and three touchdowns (with one interception). And they recovered from an 18-point deficit at one point. But this was a close one, with UCF quarterback Dillon Gabriel getting a Hail Mary off to the end zone on the final play and that being intercepted.

Arkansas 21, No. 16 Mississippi State 14: Last week, Mike Leach’s head coaching tenure with the Bulldogs got off to a great start with a road upset of then-No. 6 LSU. This week, the Dread Clanga Pirate ran into some issues at home against the unranked Razorbacks. Arkansas had lost their last 20 SEC games, but they didn’t lose this one, led by Felipe Franks completing 20 of 28 passes (71.4 percent) for 212 yards and two touchdowns. And that marked quite the celebrations for their team, as first-year head coach Sam Pittman said afterwards:

”The mood in the locker room was probably everything you might expect,” Pittman said. ”The kids have gone for a long time without having an opportunity to win. And against a team, I mean, that’s a ranked football team and for us to come in here to their place and win, the guys are ecstatic.”

As they should be.

NC State 30, No. 24 Pittsburgh 29: This one went right down to the wire, with Wolfpack quarterback Devin Leary (who finished 28 for 44 on the day, a 63.6 percent completion rate, for 336 yards and four touchdowns with no interceptions) leading two late long touchdown drives, capping the latter (a 12-play, 79-yard drive) with a 13-yard back-shoulder throw to Emeka Emezie. That marked NC State’s first win over a ranked team since 2017. And yes, that’s against a No. 24 team, and with two Power Five conferences not yet playing, but they’ll definitely take it.

SMU 30, No. 25 Memphis 27: The Mustangs may have entered this week unranked, but they look set to join the poll following this one. SMU is now 4-0 on the season, and while their previous wins came over Texas State, North Texas, and Stephen F. Austin, they looked pretty good here against a well-regarded American Athletic Conference opponent.

Admittedly, Memphis hadn’t played since a Sept. 5 win over Arkansas State, as a COVID-19 outbreak amongst their team forced the cancellation/postponements of games against Houston and UTSA. But the Tigers won the AAC championship last year and finished at No. 17 in the AP poll, and they looked to be a strong team again this year. SMU never trailed in this one, though, and the Mustangs picked up the eventual win following a late sack and forced fumble on Memphis quarterback Brady White. That led to Chris Naggar’s game-winning field goal from 43 yards out with nine seconds left.

[Photo of the TCU-Texas game from Ricardo B. Brazziell/USA Today Sports]