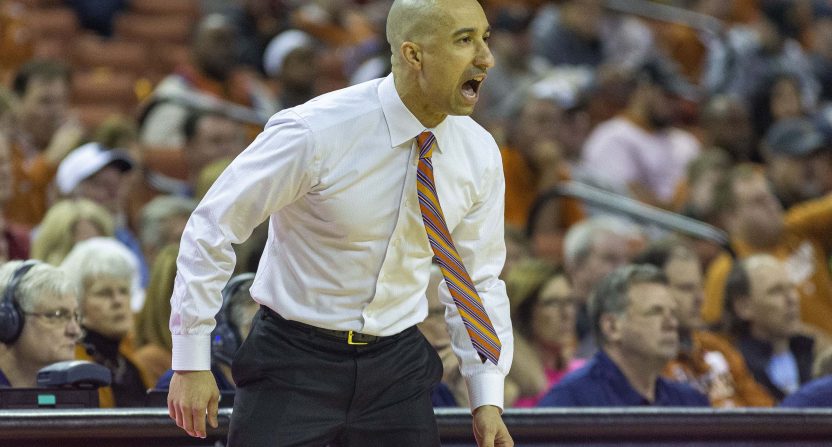 The 2019-20 college basketball season starts in November. The following coaches may (or may not) be on the hot seat. They could certainly use a successful year.

Josh Pastner is losing on the court, and now he’s in trouble off the court. Last month, the NCAA hit Georgia Tech with a 2020 NCAA Tournament ban due to violations. Pastner apparently wasn’t exactly forthcoming while talking to NCAA investigators, according to The Atlanta Journal-Constitution.

The Yellowjackets are appealing the ruling, and if the NCAA doesn’t reach a verdict by March, the ban could be delaye.  That would mean the program would be eligible for the postseason. The Yellowjackets haven’t made the NCAAs in Pastner’s three seasons and are coming off back-to-back losing years. The program hasn’t been in the tournament since 2010.

Georgia Tech is picked to finish 12th out of 15 school in the ACC preseason poll. A new 20-game conference schedule could be brutal. The Yellowjackets do have returning talent and key additions in transfer guards Bubba Parham (VMI) and Jordan Usher (USC). Losses coupled with the NCAA stuff could push Pastner out of a job.

The return of Dave Leitao was supposed to rejuvenate the program. In his first stint, he guided the then-Conference USA program to the 2004 NCAA tournament. Leitao then left to take over Virginia in 2005 where he lasted four seasons. In 2015, DePaul brought back Leitao.

His second act has been a disappointment. Yes, this is one of the tougher jobs in the country. And yes, the Blue Demons had their most victories in 12 years and reached the postseason (CBI runner-up!) for the first time since 2006-07. Still, the bottom line: DePaul finished last in the Big East for the third straight season. Also, Leitao will be suspended for the first three games of the season due to NCAA infractions, and the program has been placed on probation for three years.

DePaul and Leitao are working on a contract extension through the 2023-24 season. That’s quite a stance given the NCAA trouble AND that DePaul is picked to finish last (again). The top three scorers are gone, but the Blue Demons have junior forward Paul Reed, who was named the Big East’s Most Improved player.

Penn State will always be a football-first school. But you must be at least competitive in basketball. Last season, the Nittany Lions started 0-10 in Big Ten play. The team rebounded to finish conference play 7-13. It also bears noting that Penn State played one of the toughest schedules in the nation (ranked 10th-hardest by kenpom). Penn State has enjoyed just two winning seasons under Chambers. The program hasn’t reached the NCAA tournament since 2011 and has only four trips in the modern era (the field expanded to 64 in 1985).

The Big Ten doesn’t have a preseason poll, but Brendan Quinn of The Athletic and Adam Jardy of the Columbus Dispatch have an unofficial one. They have Penn State ninth among the 14 teams. Andy Katz has gone even further. He believes that Penn State will make the NCAA tournament. Penn State will return All Big-Ten senior forward Lamar Stevens who is the conference top returning scorer (19.9) and rebounder (7.7) and will add Oklahoma State graduate transfer guard Curtis Jones. If Penn State stumbles, the Chambers Experience could be over.

It feels like Shaka Smart has been on this list forever. If you’re a glass half-full kind of person, you could point to Texas winning the NIT last year, closing out the season with five victories. If you’re a glass half-empty person, you could point to Texas being the third-best Texas school in the conference standings. The Longhorns finished the regular season with four losses in five games, with defeats to Baylor, Texas Tech, and at home to TCU.

Smart’s best season was his first at Texas (20-13, 11-7). Since then, he’s had three straight losing conference records. Worse yet, Texas watched Texas Tech ascend to become the national champion runner-up. Texas has better financial resources than Texas Tech and has a much more desirable location. (Have you been to Lubbock?). Smart has done a solid job in recruiting. His latest incoming talent is five-star center Will Baker. But the Longhorns also lose their top three scorers from last year. A large buyout ($12.9 million) coupled with a strong finish might have saved Smart last year. He’ll need to show progress this year.

Once the hottest coach in America, Andy Enfield hasn’t done much recently. He rose to prominence by guiding Florida Gulf Coast to a surprising Sweet 16 appearance in 2013. Dunk City captured the imaginations of everyone. Enfield was supposed to bring some of that magic to USC while wrestling away the basketball spotlight from UCLA. Guess what? As underachieving as the Bruins were under Steve Alford, they did go to three Sweet 16s in his six seasons. In that same time frame, Enfield has just two NCAA tournament victories.

Last season, the Trojans (16-17) suffered through their third losing season under Enfield. USC is picked to finish fifth in the league, and will bring in a top 10 recruiting class. McDonald’s All-American forward Isaiah Mobley and fellow five-star recruit and center Onyeka Okongwu highlight the most talented Enfield has ever brought in. Will it be enough? USC is looking for a new athletic director, and the new boss might have to hire a new football AND basketball coach. There is also the Tony Bland stuff.

It’s kind of shocking that Will Wade is back. He was suspended at the tail end of last season after being linked to a wiretap in which he reportedly made an offer to a player. This led to the school putting Wade on the shelf for the final five games. It seemed like a precursor to a firing. However, Wade was surprisingly reinstated in April. Wade forfeited bonus money, and if there’s even a hint of NCAA trouble, he’s likely done in Baton Rouge.

The pressure will be on to keep LSU relevant. Wade is still employed largely because he’s a good coach. It took him just two seasons for the Tigers to win the SEC regular-season championship. LSU reached the Sweet 16 for the first time since 2006 and enjoyed its best season in 19 years. The program should continue to be good with five key returnees, including guards Skylar Mays and Javonte Smart. It also adds McDonald’s All-American forward Trendon Watford.