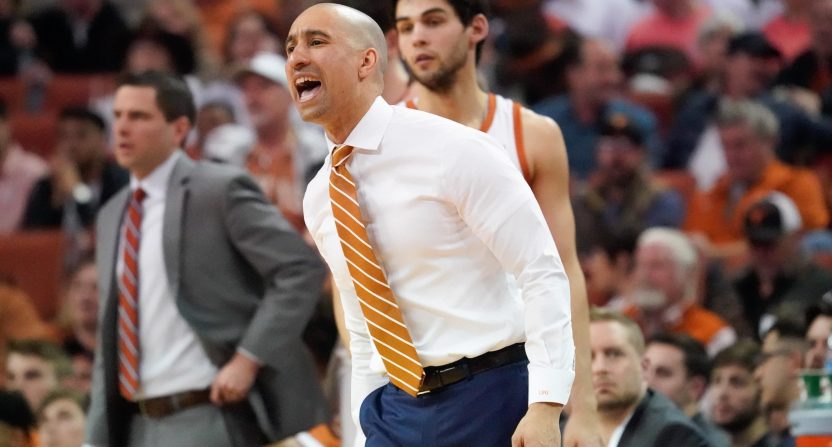 College basketball starts next month. We think. COVID-19 has made the 2020-21 season a little uncertain. Regardless, the pressure is always on the highly paid coaches. Here are six  coaches who probably need to win big now.

Boston College should’ve never left the Big East. But the Eagles chased the football dollars and bolted to the ACC, where they’re overmatched. Since its inaugural 2005-06 ACC season, the program has made the NCAA tournament three times. And the guy responsible for those appearances, Al Skinner, is gone.

Steve Donahue couldn’t get Boston College on track and was fired after four seasons. His replacement, Jim Christian, has been even worse over a longer span. The Eagles have one postseason appearance during his tenure (2018 NIT). Last season, it ended the year on a six-game losing streak.

Christian hasn’t been to the NCAA Tournament since 2008 in his final season at Kent State. He has loaded up this year with graduate transfers guard Rich Kelly (Quinnipiac), forward Frederick Scott (Rider), and forward James Karnik (Lehigh). If Christian doesn’t at least get to the postseason, this could be the end.

Patrick Ewing seems like another big name doomed to fail at his alma mater, following in the footsteps of Chris Mullins at St. John’s and Clyde Drexler at Houston. Those guys also had no previous college coaching training. Ewing was a longtime NBA assistant, but college is a totally different ballgame due to recruiting and dealing with off-the-court responsibilities.

Last season, Georgetown was picked to finish sixth. Due in part to injuries, the Hoyas wound up 8th. In February, they won at No. 19 Butler, even though they were missing top scorers Mac McClung and Omer Yurtseven. Georgetown didn’t win another game the rest of the way, dropping their final seven. McClung transferred out, the latest heralded recruit to bolt the program. And Ewing later tested positive for COVID-19.

The Pitino name helped him land a major-conference job at the age of 31. That name doesn’t quite carry the same weight anymore. Rick Pitino, three years after being ousted at Louisville due a recruiting scandal, is trying to rehab his image at Iona. His son Richard could also find himself out of a job. He has managed to hang on at Minnesota despite lackluster results. He’s 48-82 in Big Ten play. Normally an in-conference record like that gets you fired (his predecessor Tubby Smith was 46-62 in six years before being let go).

Pitino signed an extension in May 2019 through the 2023-24 season. His buyout would be $1.75 if he’s fired before April 2021. The rebuilding Golden Gophers are expected to be among the worst teams in the Big Ten with seven newcomers. However, a teenager might save Pitino. Minnesota high school seven-footer Chet Holmgren is ESPN.com’s No.1 recruit for the class of 2021.

The good news for Shaka Smart: this has the potential to be his best team. Texas returns all of its key players and should be a top-25 preseason squad. That includes all-conference third-team senior guard Matt Coleman III, and three others who were honorable mentions. The Longhorns will also add star recruit forward Greg Brown. And last year’s top recruit center Will Baker should be improved after a disappointing freshman season.

The bad news: the pressure probably will be at its highest during his tenure. The cancellation of the NCAA tournament, coupled with a $10 million buyout, probably played a role in Texas sticking with Smart. The Longhorns finished strong winning five of six, including victories over ranked West Virginia and Texas Tech. Smart probably needs to finish near the top of the league standings, plus a decent NCAA showing to keep his job. Smart has been on the hot seat for a while.

Oregon State is one of the toughest jobs in America. The Beavers have made the NCAA tournament just once this century, and haven’t won the conference title since 1990. Wayne Tinkle came to Corvallis after a successful stint at Montana (three NCAA Tournament trips in eight years). He got Oregon State to the tournament in his second year, but that’s it. Oregon State is 42-66 in what has been a watered-down league for most of his tenure. In 2018-19, the Beavers finished tied for fourth place, and that wasn’t good enough to merit an at-large bid.

This season, Tinkle will be without his son Tres Tinkle, arguably the program’s best player since Gary Payton Sr. He has no returning double-figure scorers. Wayne Tinkle got a one-year contract extension last 2019 and is signed through 2022-23. This could be the worst team in the Pac 12.

Tom Crean hasn’t been in Athens long, but you can already sense disappointment. Anthony Edwards could be the No. 1 overall pick in the 2020 NBA Draft. When you have a player of that caliber, you have to make it to the NCAA Tournament. With Edwards, Georgia went 16-16, 5-13 in the conference. In 2015-16, LSU had future top overall pick Ben Simmons and didn’t reach the NCAA Tournament. At least those Tigers went 19-14. This isn’t the first time that Crean has been perceived as an underachiever. At Indiana, he had a pair of high lottery picks in Victor Oladipo and Cody Zeller, and didn’t make it past the second weekend of the NCAA Tournament.

The guy Crean replaced, Mark Fox, had a winning record in his final five seasons. Crean has to a pair of 13th place finishes in the SEC. The Bulldogs aren’t expected to be much better this year. It takes time to build a program, but Georgia surely was expecting better than this.