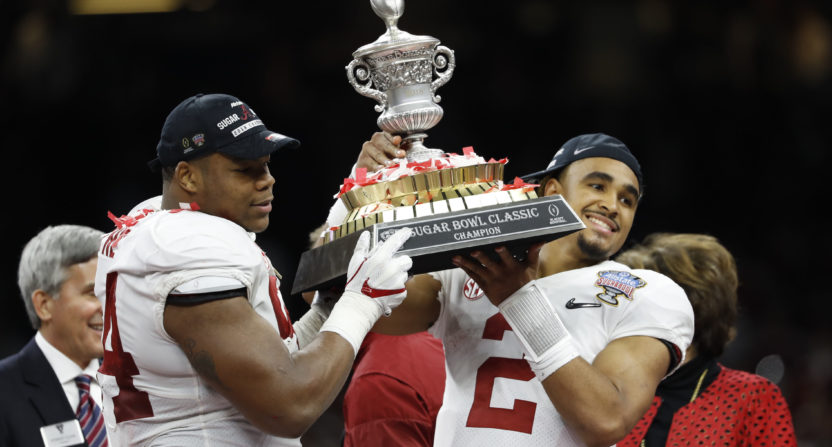 Saying that the Alabama Crimson Tide football program under Nick Saban is one of the most dominating dynasties in college football history isn’t a very bold statement. There’s pretty much no denying it at this point as the team returns to yet another national championship game. However, sometimes its good to put things in perspective just to see why it has been such an impressive era of football, even if you’re tired of hearing about it.

College football has seen a lot of good programs rise and fall over the years. A few lucky ones find themselves atop the heap for two or three years in a row. The rarest of them all, however, create a dynastic era where their program is the one that defines the entire sport for a decade.

After beating up Clemson on New Year’s Day, Alabama notched its sixth appearance in the national championship game in nine years (a .667 appearance percentage for those at home). As if they weren’t already the program of the 2010s, that question is answered beyond a shadow of a doubt. Saban’s Tide has been so good for so long that they’ve even spanned two different postseason systems aimed at streamlining the sport’s spotty efforts in determining a true champion each season.

Alabama won the BCS Championship Game, effectively winning the national title, in 2009, 2011, and 2012. When the sport switched to the College Football Playoff, they won it all in 2015 and lost in the title game in 2016. Their return to the championship in 2017 renders this dynasty more sprawling than any others of the modern era.

We know because we checked. We took a look back at the other “dynasties” that college football has seen since the 80s. While we might squabble over which programs qualify and which don’t, these were the ones that stood out based on championships won and consistent appearance in the national title game. Now, it can be a little tricky to determine whether a team “played for the national title” before the BCS because bowl affiliations overruled rankings. You’d often see the No. 1 team in the nation play the No. 6 team in one bowl game while No. 2 played No. 4 in a different bowl. For modern college football fans, that must sound as insane as it did to the rest of us back then.

Perhaps known as “The U Era,” Miami’s original dynasty began in 1983 with their first national title under coach Howard Schnellenberger. After he left, Jimmy Johnson got the Canes back to the No. 1 ranking and a showdown against Penn State in Fiesta Bowl, which they lost. They picked up Title No. 2 the following year by beating Oklahoma in the Orange Bowl. They followed that with another title in 1989, this time under coach Dennis Erickson. The U would make one more title game appearance, losing to Alabama in the 1992 Sugar Bowl, before things went south for the program.

Altogether, that’s six appearances in ten years (.600). While their decade of dominance has a year on Alabama (for now), the Tide tops it based on being back to do more in less time and doing so under one coach.

As Miami’s dynasty was winding down, FSU’s was just getting started. They won the national title in 1993 but took a slight step back in the next few years as a perennial top ten program that just fell short. In 1996, No. 1 FSU took on No. 3 Florida in the Sugar Bowl and got trucked (after beating the Gators during the season). After missing out in 1997, they took on Tennessee in the first-ever BCS National Championship Game, losing 23-16. They returned in 1999 and topped Virginia Tech to win their second national title of the run. They got back to the title game once more in 2000 but lost 13-2 to Oklahoma.

FSU’s run of five appearances in eight seasons (.625) certainly looks good on paper but FSU’s reputation suffered a bit in between titles when it seemed they’d never get another. They also lost that title game more than they won, which Alabama has not.

There’s probably a whole contingent of young college football fans for whom the idea of a dominant Nebraska football team sounds foreign. And yet, for much of the 1980s and 1990s, there were one of the football programs you dared not play. Tom Osborne arguably had multiple dynastic runs during his tenure with the Huskers but none more impressive than this one. Thanks to Boston College’s epic upset of Notre Dame, the Huskers got into the 1993 title game but fell to FSU. In 1994, they cruised to a 12-0 finish and national title. They did it all over again in 1995, whomping Florida for back-to-back titles. After missing out in 1996, they returned to form in 1997, walloping Peyton Manning’s Tennessee 42-17 and splitting the national title with fellow-undefeated Michigan.

Four title game appearances in five years (.800) is a helluva run that even Alabama hasn’t been able to match. That they also won three titles in that span is impressive as hell. But Alabama’s run is longer, features more titles, and doesn’t seem to be ending anytime soon.