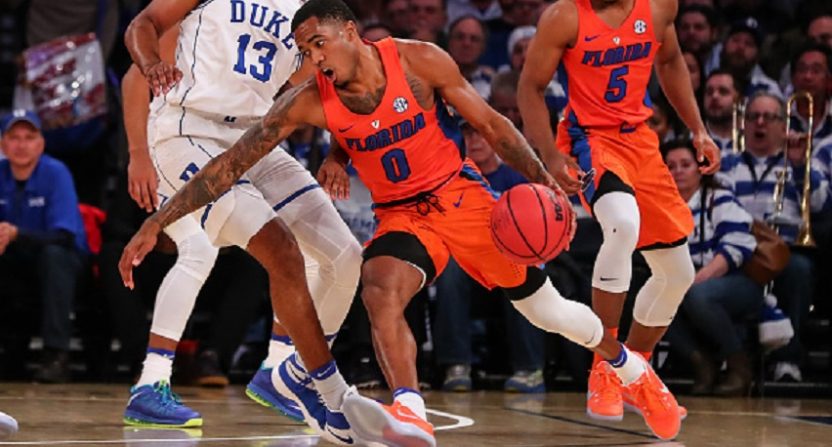 The last couple years of Florida Gators basketball have not lived up to the established standard in Gainesville.

From 1998-99 through 2013-14, Florida won at least 20 games each year, made 14 out of 16 NCAA Tournaments, played in four Final Fours and won two championships. In the two seasons that followed, the Gators went 37-32 and missed the tourney both times.

UF’s transition from Billy Donovan to Mike White didn’t look incredibly smooth at first. But as the 2016-17 regular season winds down, White’s Gators are starting to resemble title contenders once again.

Starting out unranked, Florida shuffled through the early goings of the regular season. They beat bad teams handily, and squeaked by some peskier foes like St. Bonaventure (seven-point win) and Seton Hall (five points). The Gators lost to eventual No. 1 team Gonzaga by five. They’d lose to a couple more strong teams in Florida State and Duke in the weeks to follow.

At 9-3, Florida finished up non-conference play looking it was a stretch to get a 3-seed in the SEC Tournament, never mind the NCAAs.

And yet, with a 21-5 record (and 11-2 in the SEC), the Gators are the favorite to win their conference over Kentucky, and are on the short list of national title contenders.

How’d we get here?

It all starts with an experienced team full of guys who saw the success this program was capable of. Two of the team’s four leading scorers were on the 2013-14 team that won 30 in a row before being upset by UConn. Kasey Hill and Canyon Barry carry the disappointment of that season with them. They didn’t need to be there for the back-to-back titles to understand the opportunity that was in front of them a few years ago.

KeVaughn Allen (sophomore) and Devin Robinson (junior) didn’t need that near-miss to propel them. Both players are looking for their first tastes of NCAA Tournament play.

Florida plays a balanced attack that attempts to keep the minutes spread out, and maintain fresh legs on both ends of the floor. Nine different Gators players average at least 13 minutes per game. None average more than Hill’s 28.4.

The results of that may not show up in terms of their pace of play (UF’s 110th in adjusted tempo on KenPom.com). But it’s kept the offense and defense both brutally efficient. The Gators have the fifth-most efficient defense in the country, allowing just 89.4 points per 100 possessions. Offensively, they’re putting up 117.4 per – good for 19th overall. A whopping 22 percent of opponent possessions end in turnovers (23rd overall).

Florida has feasted, not just on the dregs of non-conference play, but on the top half of the SEC as well. They’re 3-1 against the conference’s other top four teams (Kentucky, South Carolina, Arkansas and Alabama). The Gators have also put up 70 or more points in 11 of 13 SEC games so far this year (the other two games being their only conference losses).

They beat the vaunted Kentucky Wildcats and their endless supply of five-star players by 22 points.

Now in the midst of a seven-game winning streak, the team traces the recent surge back to a team meeting in January.

Back-to-back losses to South Carolina (understandable) and Vanderbilt (a bad one) left Florida at 14-5, and with alarming questions on the offensive end. They’d averaged less than 60 points per game in the two defeats.

The team meeting had them recommit to each other, as White told the Orlando Sentinel. Robinson added that they’d been focused on the wrong aspects of the game, and talked about refocusing on team basketball.

That focus has paid off in the heart of league play. Florida is near the top of the SEC in steal percentage (second with 11.3) and assist percentage (fifth with 51.4) during conference games. Until Tuesday night, LSU was the only team to score more than 70 points against the Gators since the win streak started, and the Tigers still lost that game by 35. Auburn managed 95 on Feb. 14, but they also gave up 114 to the Gators (the most UF had scored in one game since 2000).

Florida is rolling toward the postseason with the country’s 16th-toughest schedule in the rearview mirror, and ample opportunities to keep racking up wins in front of them, too. KenPom gives them at least a 70-percent chance to win five of the final five games (Kentucky is the only favored opponent). A 25-6 Gators team heading into the SEC Tournament could very well be playing for a two-seed or even a No. 1, depending on how other top squads perform.

For White and the Gators, bouncing back has been far from easy these past couple years. But this spring, it certainly looks as if they’ve figured it out. Their brand of team-first basketball is powered by experience and a desire to regain a place atop the sport. Playing the way they have of late, Florida just might be able to win it all again in early April.

1 thought on “After a slow start, Florida basketball looks like a title contender this season”