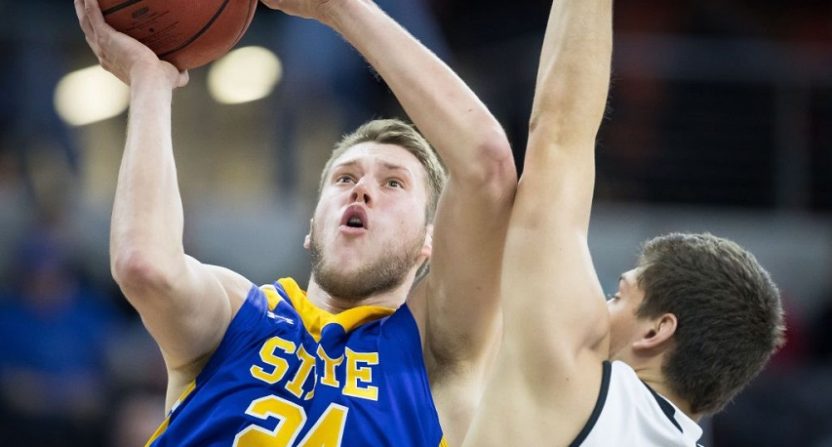 When the favored Wichita State Shockers cut down the nets after winning the Missouri Valley Conference Tournament this past weekend, it was a culmination of a dominant season. The league’s best team went 30-4 and 17-1 in league play. They beat Illinois State (who also finished 17-1 in the MVC) by 20 points or more two separate times.

Wichita State, an annual NCAA Tournament participant, will head to the Big Dance as a dangerous eight-seed, or something close to that. They stand a good chance to win a game, increasing the profile of both the program and the conference – and bringing home the cherished postseason shares that equal additional payouts for the successful leagues.

Wouldn’t every mid-major (and low-major) conference want to send its best teams to the tourney? It doesn’t appear so, if you take a look at the Championship Week results each season.

In 2016, just seven top-seeds from (typically) single-bid conferences won their respective tournaments, earning an invite to the NCAAs. That number was eight in 2015, and back down to seven in 2014. The Ohio Valley hasn’t secured an auto-bid for its best team for four consecutive years now (including this season). The MAAC hasn’t since 2010, when Siena was the class of the league at 27-7.

Not one of these single-bid conferences has sent its best team in each of the last four years. Even the Ivy League, which had it right and awarded the automatic bid to the best regular season team, will dip its toes into a four-team playoff this year. A year when Princeton’s been receiving AP votes, but could miss the NCAA Tournament because of one loss. They’ve already beaten every Ivy opponent twice this year, en route to a 14-0 record. What more should they need to prove?

While Championship Week creates a “fun” atmosphere for fans, a select few teams and ESPN, what is it really doing for these conferences?

The two-week long basketball bonanza has largely served as a reward for failing to handle your business in the regular season, while punishing teams that succeeded in conference play. It played out like that for Belmont and others already this month. Their season was a one-game playoff, despite the dominance up to that point.

In recent years, nearly two-thirds of mid- and low-major regular season champs have been left out of the NCAA Tournament. Meanwhile, teams with losing records have become the norm on Selection Sunday. Sub-.500 teams have made appearances for five straight seasons now, with last year’s 14-19 Holy Cross squad arguably being the worst of all.

The easy answer for “why” the sport’s smaller conferences do this is money, and the cash-and-exposure combo that ESPN has them buy into.

Crain’s Cleveland Business talked about some school and conference revenues back in January, specifically focusing in on what smaller schools take in from TV rights and licensing.

MAC schools like Ball State are taking home over $4 million from these deals (though they have football to help drive that cost up). But Horizon League schools like Cleveland State earn less than $700,000 annually – and less than half of that is from the conference’s deal with ESPN (which includes Championship Week).

Meanwhile, instead of a small payout near (or less than) $300,000 for most conferences, they could be making smarter long- and short-term investments by sending their best teams to the NCAA Tournament. These leagues are potentially leaving millions on the table each year as a result.

The NCAA hands out per-conference rewards from a basketball fund each year, which is dictated by league success over the span of six postseasons. For each game that a team from a given conference participates in, that’s another “unit” (share) paid out to that league.

As ESPN’s Darren Rovell mentions in this helpful article from last year, each game was worth $265,791 in the 2016 tournament – but that’s just one year. Over the course of six seasons, that equates to around $1.6 million. Per game.

No, the Patriot League, or Ohio Valley or MAAC isn’t earning that amount. Those are record figures. However, by sending their best teams, those leagues would stand a chance to increase their shares of the constantly climbing total. The millions earned from advancing in the NCAA Tournament and the resulting exposure would more than make up for any short-term loss on Championship Week.

If you look at the unit breakdown per conference from 2010 to 2015, it’s obviously heavily weighted toward the large leagues. But focus in on the differences in the margins. How just one win increases a conference’s annual payout by over $250,000. Even playing in the First Four benefits a conference. In 2012, Vermont got two units for the America East by winning that play-in game, and then getting bludgeoned by North Carolina.

The fun of Championship Week is indisputable. And the “everyone has a chance to win it” vibe of those smaller tournaments are part of what makes March special, too.

But if these conferences are honest with themselves, that college athletics is indeed a business, there’s no disputing what they’re passing up just by having a couple late-night games on ESPN2 this week.

For the good of a more competitive NCAA field, and the financial staying power of these conferences, it’s time to put the charade to bed. End Championship Week, and let’s see the best possible teams make the field… and make their respective leagues (and the teams) some more money in the process.

1 thought on “For small conferences, Championship Week does more harm than good”