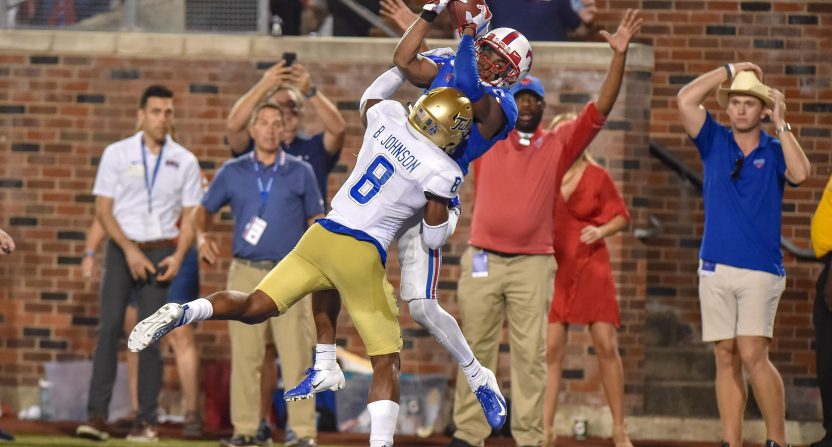 There may be some magic going on in Dallas this season. The SMU Mustangs improved to 6-0 a week after cracking the AP Top 25 for the first time since 1988. On Saturday night, the Mustangs looked like their great start to the season was about to go up in flames, but SMU rallied in the fourth quarter and prevailed in triple overtime to keep a potentially magical season going.

Tulsa had SMU buried with a 30-9 victory going into the fourth quarter. Seriously. SMU even gave up two touchdowns in the span of one second thanks to a bizarre special teams mistake that saw Tulsa recover a free ball off a kickoff in the end zone for a touchdown.

But later in the game, as the fourth quarter began, SMU was in the midst of a tremendous comeback. A short touchdown run to open the fourth quarter gave SMU life. After the defense did its job to force a quick punt, SMU continued to pull through with a 92-yard drive ending with another touchdown. Shane Buechele capped the drive with a 14-yard touchdown pass to James Proche. Suddenly, it was a one-score game midway through the fourth quarter and SMU had all of the momentum. A quick three-and-out for Tulsa gave the ball right back to the Mustangs. Starting at their 20-yard line, Buechele and company got right back to work. On 4th-and-1 from the Tulsa 20-yard line, Xavier Jones kept hope alive with an eight-yard run. Jones would later end the drive with a game-tying touchdown with just over a minute to play.

To overtime Tulsa and SMU went, and the teams exchanged touchdown drives to open the extra session. SMU needed a fourth-down conversion to keep the game alive and they scored one play later to force a second overtime.

Prior to SMU’s first overtime possession, Sonny Dykes took a timeout to share his thoughts on Tulsa’s touchdown in the first overtime. Dykes pointed out the Tulsa touchdown took place after the play clock had hit zero. The play should’ve been flagged for a delay of game, with the football moving back five yards. But this was not a reviewable play for the replay officials, and the Tulsa touchdown stood.

Fortunately for SMU, video replay would come back into play in the third overtime. But first, both teams failed to score in the second overtime. SMU fumbled the football and Tulsa recovered, but the Golden Hurricane were unable to send a game-winning field goal through the goalposts, and we headed to a third overtime.

Tulsa got the ball to start the third overtime and once again settled for a field goal attempt. But after kicker Jacob Rainey appeared to get injured on his second overtime kick attempt, Tulsa had to send in kickoff specialist Zack Long for his first career field goal attempt. It did not go well. With a chance to keep their undefeated start to the season intact, SMU just needed any score to secure the win. Buechele then threw to the endzone to Proche, who came down with an incredible catch. The refs initially ruled the pass to be incomplete, but a video replay determined Proche maintained possession of the football with one foot down for the walk-off video replay victory.

The last time SMU started a season 6-0 was 1982. It’s been a long time coming for the SMU program. With the win, SMU is currently firmly in the running for a spot in the New Years Six as the top-ranked Group of 5 conference champion. Of course, SMU has some hurdles still to clear, like division games with Memphis and Navy (both winners on Saturday). But for at least one more week, SMU fans have something to be proud about with their program, which continues to try climbing back to a stable position decades after the NCAA slammed them school with the death penalty. How long this ride lasts remains to be seen, but it’s been a fun season of SMU football so far. It’s been a while since we could say that.