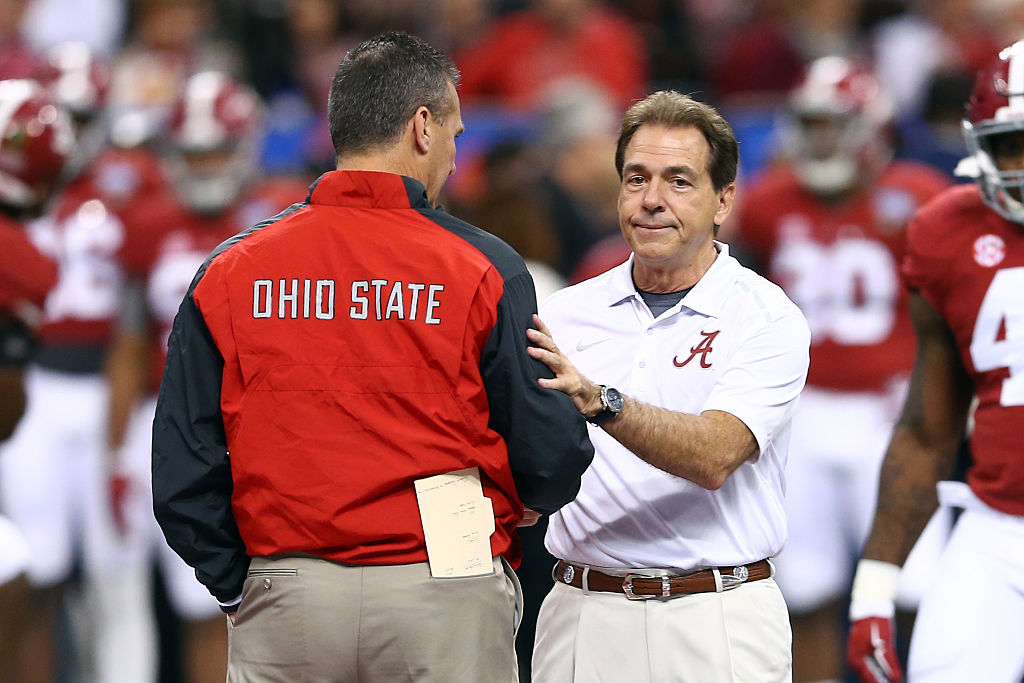 Right after Ohio State pulled out the Big Ten championship against Wisconsin, the debate instantly began between Alabama and Ohio State: who should get into the fourth spot in the playoff? A conference champion with two losses, one of them an inexcusable blowout to a team with five losses, or one that didn’t even win its division and whose resume looked entirely ordinary after a full season? There was no “right” decision for the committee this year, since leaving either Ohio State or Alabama out would have its consequences along with a whole host of commentary hating the decision.

In the end, though, the committee’s choice of Alabama for the fourth spot was not only the best decision for the future of the playoff, but also showed consistency from year-to-year and established a standard that all teams need to follow. The playoff is for the four best teams, not necessarily the four best power five conference champions.

Alabama was ranked #1 in at least one poll from wire-to-wire until their loss to Auburn. Even though the Crimson Tide haven’t looked like Alabama teams of old, dominating everyone in their path, that doesn’t mean they haven’t been impressive. It’s not their fault that Florida State quarterback DeAndre Francois suffered a season-ending injury, taking Alabama’s best non-conference game and turning into a mediocre win. It’s not their fault that Auburn didn’t have a fully healthy Kerryon Johnson in the SEC title game, and that he couldn’t make the difference he previously made in Auburn’s wins at home against Georgia and the Tide. Alabama also couldn’t control LSU not coming through, the bottom falling out in Knoxville, and even that Fresno State failed to win the Mountain West because they couldn’t host the title game based on some computer formula. Speaking of computer formulas…

In some metrics, certainly with wins on their resume, Alabama was inferior to Ohio State, and even to USC. But the committee saying Alabama was “unequivocally better” erased all doubt. For all of Alabama’s underwhelming performances, it must be said that Ohio State needed a massive comeback just to beat Penn State, and nearly squandered a big lead as well against Wisconsin. And while Alabama’s loss was certainly damaging, it was in a rivalry game against a team that had beaten #1 at home two weeks ago. For all of the successes Iowa has against highly-ranked teams at Kinnick Stadium, the Buckeyes losing by 31 there ultimately proved to be the death knell.

It probably hurt a lot of people in that Grapevine, Texas conference room to leave two conferences out of the playoff completely and put two SEC teams in the dance. But if the whole point of the playoffs was to eliminate metrics and complicated formulas and just get the best four teams in the country into the playoff, then Alabama being included over Ohio State meant that was the case. This was the case when the Buckeyes made the playoff over Baylor and TCU in 2014, and when they were included over Penn State last year. Consistency for the committee is key, and showing consistency not just week-to-week but year-to-year legitimizes the enterprise in a way that none of the other previous methods for determining a national champion ever had.

“The selection committee just favored Alabama’s full body of work over Ohio State, and it was consistent over the course of the year, as we saw Alabama play week-in and week-out,” committee chairman Kirby Hocutt told Rece Davis after the semifinals were announced. “Our rankings showed each and every week the selection committee believed Alabama was the better football team.”

Conference championships don’t automatically put teams over others, unless Ohio State beat Wisconsin like they did in 2014, in which case the committee’s decision likely would have changed. Ohio State may have swayed opinions if they had won like that against a previously unbeaten Wisconsin team, but they didn’t. One of the four best teams in the country can certainly lose close on the road when they lose their starting QB or in a rivalry game on the road, but not by 31 at an unranked team, no matter the environment.

“I would say our charge is very simple,” Hocutt said. “Our charge is, the selection committee has to identify the four very best teams in the country. When there are close separations between the teams, we’re instructed to look at certain criteria. In this case, the margins weren’t close enough to look at those.”

By putting Alabama in over Ohio State and to a lesser extent USC, the committee backed up what it said with its actions. The best four teams are in the playoff, even if it means two conferences are shut out completely and two SEC teams, including a less-than-usual Alabama, do make it. It’s a tough decision to make diplomatically because of the egos of the people involved, but sometimes making the right decision involves sacrifices, and the sacrifice this year was at the expense of the Big Ten.

Every season is different, and maybe next year, the same discussion is had with the Big Ten getting two teams in. If the exercise here is to get the four best teams in the playoff, no matter who they are, then the committee has done that again in spite of the potential consequences. It has ruffled some feathers, rankled some egos, and frustrated some too, but in the end, the decision they made was the right one. A decision consistent with past playoffs, and most importantly, consistent with the ethos of why there is a playoff in the first place.

Five doesn’t go into four, and someone had to be left out. But in the interest of the sport, and for the legitimacy of the method to select a champion, the committee taking Alabama over Ohio State was the correct one.