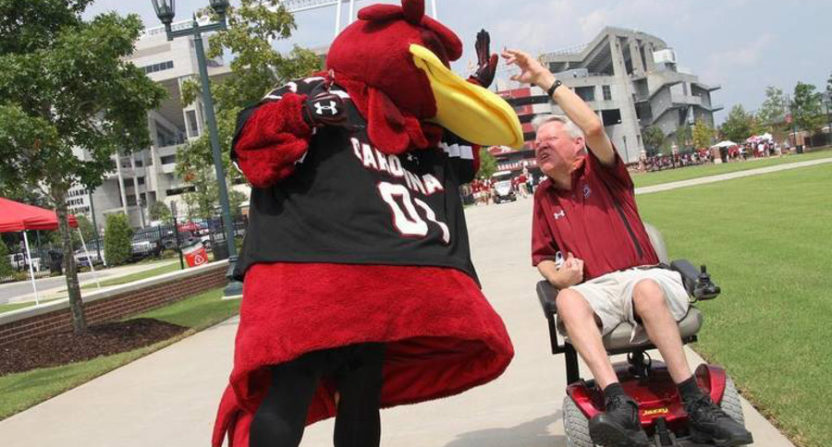 South Carolina Gamecocks fan Kirk Hollingsworth thought his streak of watching their football games in person would end this weekend at 295 after 25 years, thanks to him not being able to find a way to make it to Columbia, Missouri for their game against the Mizzou Tigers after a planned bus trip and other options fell through.

Hollingsworth (seen above with South Carolina mascot Cocky) has some mobility challenges, limiting his transportation options. However, after he tweeted about his streak ending, fan support poured out for him and South Carolina athletic director Ray Tanner found room for him on the team plane:

Hey #GamecockNation I wanna thank every1 from bottom of my❤ all the kind words trying to get me to Mizzou. Was just informed I WILL B GOING!

Here’s more info on what happened, from Ben Breiner at The State:

Those tweets drew an outpouring of support, and some folks high up at the school weren’t about to let him miss it.

“The University of South Carolina called and said they’ve got room for me on the (athletic department) plane that leaves out in the morning,” Hollingsworth said. “Ray Tanner got this thing organized in a quick fashion. I’ll be going.”

…Hollingsworth said the response from other fans was simply overwhelming. He also wanted to make the point that with Hurricane Irma looming, there’s more important things to worry about and he hopes people stay safe.

But he’s still thankful and ecstatic.

“Gamecock nation really came through for me,” Hollingsworth said. “I can’t thank them enough and I can’t thank (enough) the University of South Carolina for making this happen.”

That’s good of the school to step up and help Hollingsworth continue this streak. He’s a fan who’s been well known for his passionate support of the Gamecocks across multiple sports, and he hasn’t missed a football game since 1992. Here’s a video on him and his fandom:

It looks like Hollingsworth’s streak will be going for a while after this, too. South Carolina’s next two games are at home, and he already has plans to attend their next road one, at Texas A&M Sept. 30. So he should be able to hit 300 at home against Arkansas Oct. 7. That’s pretty special, and it’s only because of the athletic department stepping in here.

[Photo by Dwayne McLemore, The State]