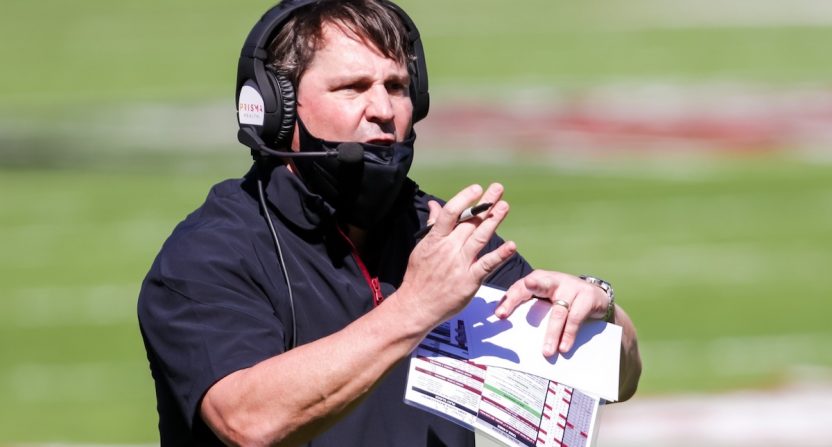 With three games remaining on its 2020 football schedule, South Carolina has fired head coach Will Muschamp. The news was first reported by Mike Uva of Columbia’s WACH-TV.

The dismissal comes a day after the Gamecocks’ 59-42 defeat to Ole Miss in Oxford. The loss dropped South Carolina to 2-5 on the season, placing them sixth (second-to-last) in the SEC East. Following an upset of now-No. 15 Auburn on Oct. 17, the team had lost three straight games while allowing a total of 159 points.

Players were reportedly told about the coaching change in an emergency meeting shortly before news of Muschamp’s firing was released to the media.

We were confident around 4 PM that it was going to happen but when I saw Muschamp‘s car in the parking lot we pulled back. Was told at 6:50 an emergency meeting at 7:15 with the team was announced to share the news with the players. 95% sure isn’t 100% sure until it’s 100%

Muschamp will receive a $13 million buyout, making this an expensive decision for the football program. The total covers the final four years of his contract, unless or until Muschamp takes a job elsewhere. He figures to be in demand as a defensive coordinator.

Josh Kendall, who covers South Carolina for The Athletic, tweeted that keeping Muschamp through the end of the season may have caused longer-term damage among the fanbase.

Will Muschamp's buyout is just north of $13 million. It was cut slightly as part of the most recent amendment to his contract. There had been growing concern among school officials and supporters that continued fan apathy could cost South Carolina more.

Offensive coordinator Mike Bobo, who was hired for that position following the 2019 season, will take over as interim coach. Bobo was previously the head coach at Colorado State from 2015 to 2019, notching a 28-35 record in his five seasons.

In five seasons at South Carolina, Muschamp compiled a 28-30 record and three bowl games. The Gamecocks never finished higher than second place in the SEC East during his tenure, unable to build on a 9-4 record in 2018 that ended with an Outback Bowl victory over Michigan.

Will Muschamp is going to end his career collecting $21 million in buyout money from SEC schools. Legendary.

Muschamp succeeded Steve Spurrier in Columbia, taking the job after one season as defensive coordinator at Auburn. Prior to that, he was the head coach at Florida, finishing with a 28-21 record over four seasons (including an 11-2 mark in 2012).

Before finally taking a head coaching position, Muschamp was highly regarded as a defensive coordinator at LSU (under Nick Saban), Auburn, and Texas, in addition to a one-season stint as an assistant with the Miami Dolphins.

According to Kendall, candidates are expected to include Louisiana head coach Billy Napier, Coastal Carolina’s Jamey Chadwell, Liberty’s Hugh Freeze, and Oklahoma assistant Shane Beamer, who was on Spurrier’s staff in Columbia. Could Clemson offensive coordinator Tony Elliott also consider making an in-state move for a head coaching position in the SEC?

UPDATE: Scott Eisberg of WCIV in Charleston, South Carolina already reached out to Chadwell. But the coach was dealing with other matters at the time. We assume he’ll get back to football business after making his wife happy.