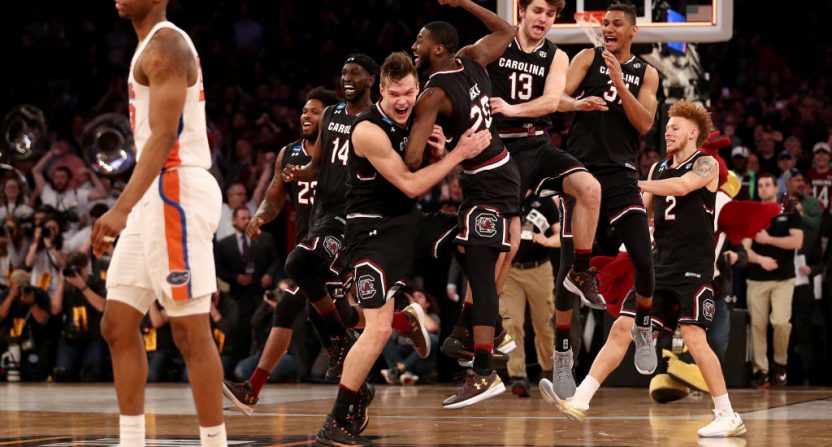 The South Carolina Gamecocks’ magical March Madness run continues. Following wins over 10-seed Marquette, 2-seed Duke and 3-seed Baylor, the Gamecocks knocked off 4-seed Florida 77-70 in an all-SEC East Regional final Sunday to earn the first trip to the Final Four in school history. They bounced back from a 40-33 halftime deficit and executed well down the stretch, making their first-ever trip to the Elite Eight a successful one.

Senior guard Sindarius Thornwell was crucial for the Gamecocks, as he had been all tournament. Thornwell notched 26 points on the day, hitting eight of 13 shots from the field and nine out of 10 from the line, and became the eighth SEC player overall (and the first since Kentucky’s Tony Delk in 1996) to record 100 points in a single NCAA tournament.

Thornwell also had seven rebounds, and he made an important free throw inside the final 30 seconds to put South Carolina up by five. That paved the way for this emphatic forced turnover, pass and dunk (by Duane Notice) that gave the Gamecocks a seven-point lead and sealed the victory:

This has been an incredible run for the Gamecocks, and it’s going to continue. Along the way, they’ve made many look silly, including the For The Win writer who wrote about Duke’s “ridiculously easy” path to the Final Four (and was mocked by the university’s official Twitter account after South Carolina beat Duke) and the separate For The Win writer who said the Gamecocks only won because the Blue Devils “were too easy to hate.”

(The latter writer also argued that “Duke is a better team than South Carolina, and nothing that happened on Sunday night changes that,” that if not playing Duke, the Gamecocks “otherwise have little motivation to do anything other than succumb,” and that the Gamecocks “aren’t a great team,” but “got the glory they wanted” with the win over Duke. All of those takes look pretty cold right now.)

It hasn’t been an easy road for South Carolina. They’ve trailed at halftime in three tournament games, but they’ve somehow found a way to battle back each time. Their ferocious defense has certainly helped, and head coach Frank Martin (who’s in his fifth year at the school following five years at Kansas State) has done a great job of both building around veteran players like Thornwell and working in new faces.

Along the way, Martin has already produced the best NCAA tournament result in school history. The Gamecocks’ previous high-water mark was the Sweet Sixteen, which they reached from 1971-1973 but hadn’t made since. We’ll see if Martin can continue that success against Gonzaga in the Final Four next Friday.