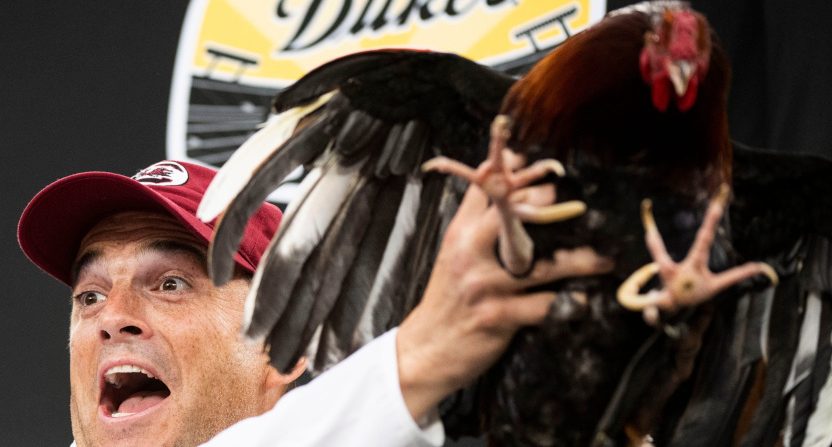 There are quite a few colleges and universities that still use live animal mascots in some fashion, but there are challenges with that, especially when it comes to the animals’ health. That’s led to some changes to procedures, such as LSU‘s Mike the Tiger (currently Mike VII) no longer attending games. At South Carolina, though, a change made to try and maximize the wellness of their Gamecock mascot may wind up leading to the mascot having to use a different name than the “Sir Big Spur” it has gone by.

As David Cloninger of The (Charleston) Post and Courier explored in a story published Tuesday, titled “No more Sir Big Spur? Controversy over Gamecocks’ live mascot ruffles feathers,” the key issue here is about a change in who owns the mascot. Sir Big Spur, initially owned by Mary Snelling and Ron Albertelli, debuted at South Carolina baseball games in 1999, and then at football games beginning in 2006. Snelling and Albertelli maintained that tradition for six Sir Big Spurs.

With Albertelli and Snelling getting older and facing health issues, though, they looked for someone else to take the mantle on, and handed Sir Big Spur VI over to Beth and Van Clark  in 2019. And while the mascot couldn’t attend games in 2020 due to COVID-19 restrictions, it was there for football in 2021 (as seen above being lifted by head coach Shane Beamer following a Duke’s Mayo Bowl victory on Dec. 30), and for baseball this year. But Sir Big Spur VI passed away during baseball season, so the Clarks tried out three new roosters, with the intention of making one of them Sir Big Spur VII.

But Snelling and Albertelli launched a protest after seeing photos of those roosters, which have their combs (head crests birds use to cool themselves) intact. They argue that a bird with a comb is not a “fighting Gamecock,” because the combs were often removed on birds used for fighting. Meanwhile, the Clarks argue that it’s not healthy for the animals to remove their combs, as that can lead to them overheating. Here are some quotes on that from Colinger’s story:

“If they’re truly going to fight, they take off the combs because that’s one more part that can bleed,” Albertelli said. “The comb always stands out in a picture of a barnyard rooster, but Sir Big Spur is a Fighting Gamecock.”

The birds that the Clarks used after Sir Big Spur VI all had combs. Snelling and Albertelli asked why.

“We raised these gamecocks to be mascots. The mascot needs to be, I feel, branded with the university,” Van said. “We also want the birds to be as healthy as possible. When the combs are off, they can’t handle heat as well. These birds are raised to be mascots, and at many games, the heat is nearly unbearable. We want to keep the mascot healthy. That’s our job now.”

The large Gamecock statue in front of Williams-Brice has a comb, something Snelling abhors. It also has spurs, a late addition after it was installed without them and fans complained.

…“A chicken is a chicken but a fighting gamecock is something different. This is dumbing down the Gamecocks,” Albertelli said. “Whenever a new coach goes to a school that’s been struggling, you always hear a statement similar to, ‘You’ve got to change the culture.’

“I don’t know what culture in our day and age means, but if it means making a gamecock look like a chicken, or not hurting him because it might make the chicken feel good, it’s not preserving what we’ve built. This is dumbing down our culture.”

Here’s a video the South Carolina athletics department put out on Sir Big Spur in 2011:

As Cloninger’s story notes, the “Sir Big Spur” name is trademarked by Snelling and Albertelli, and it was licensed to the university under a contract that ran out this week. They’ve said they won’t extend that. However, the university still wants to use one of the Clarks’ birds (comb and all), and appears set to do so; they just may have to come up with a different name. And, unsurprisingly, Twitter has had a lot of reaction to this:

Sir Big Spur, the Gamecocks' live mascot, will have a different look, and a different name this season, because of a bone of contention between the original owners and the new owners.

Make that, a comb of contention.https://t.co/xJIXn6TASL

I repeat: Everyone in the state of South Carolina starts at baseline crazy

people worry about the future of college sports but as long as there are people willing to go to the mat on the premise that a barely perceptible change to the look of a live animal mascot is "dumbing down the culture" we are thriving https://t.co/LB5SXoyQOV

In-fighting among 2 families over the appearance of a live rooster mascot is why this is the best sport https://t.co/iODNCsGDnw

if they really want to avoid abusing this animal, they shouldn't force it to watch South Carolina football https://t.co/gzPa96GuXx

We’ll see if South Carolina comes up with a new name for the mascot, and if so, what that winds up being.