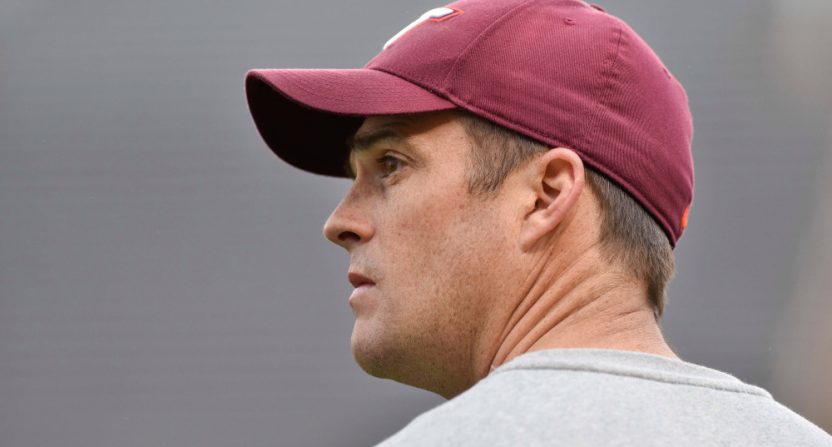 BREAKING: #OU assistant Shane Beamer, son of VaTech legend Frank Beamer is expected to become the next head coach at South Carolina, per sources. The 43-year-old Beamer was a former Gamecocks assistant and is very popular with the former players.

I can confirm @BruceFeldmanCFB report – Shane Beamer is exacted to be named the next head coach of the Gamecocks, according to sources close with USC. An official announcement from the school is expected to come in the coming days this week. @wachfox

South Carolina fired head coach Will Muschamp on Nov. 15, after the team started 2-5. Former Colorado State head coach Mike Bobo has served as the interim head coach for the Gamecocks, and they’ve gone 0-3 in those games, bringing their current record to 2-8.

Beamer has been the assistant head coach and tight ends coach at Oklahoma — currently ranked No. 11 — since 2018, working under Lincoln Riley.

The 43-year-old has a history at South Carolina, serving as cornerbacks coach for the Gamecocks in 2007-08, as well as outside linebackers coach and special teams coordinator for the Gamecocks in 2009-10. He left South Carolina to be an assistant head coach and running backs coach for his father at Virginia Tech in 2011-15 (he also played at Virginia Tech as a wide receiver and long snapper in 1995-99), before going back to the SEC to join Georgia as a tight ends coach and special teams coordinator in 2016-17.

So, this is Beamer’s first head coaching job, but he has a lot of history as an assistant at big programs, and is very familiar with the SEC (he even was a graduate assistant at Tennessee and cornerbacks coach/recruiting coordinator at Mississippi State in the early 2000s). He has a lot of experience recruiting, and he’s worked as an assistant coach on both sides of the ball at various positions. Working with Riley in Oklahoma’s innovative offense has likely taught him some things. And he’s surely learned a thing or two about coaching from his dad.

UPDATE: South Carolina made the hiring official, and Beamer got emotional while walking around Williams-Brice Stadium.

Lead from the heart. pic.twitter.com/qsF3eaaVBx