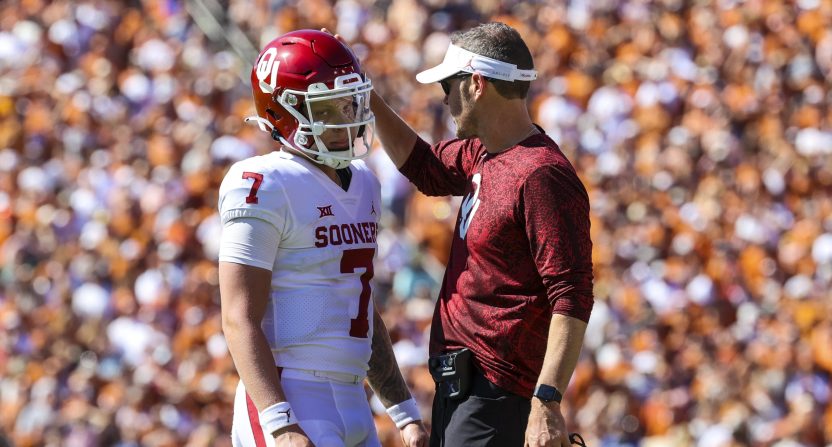 The South Carolina Gamecocks have a new quarterback in Spencer Rattler. The Oklahoma transfer is happy to be in South Carolina — and to be out of Oklahoma.

Rattler announced at the end of the 2021 season that he was transferring. At the bottom of his announcement were the words “Thank you Oklahoma.” But now, his comments regarding his former home are not as kind.

Chris Low of ESPN quoted Rattler, who had some less than flattering things to say about his experience with the Sooners.

“A lot of guys don’t get another chance, to start over where they’re really wanted. I was just happy to get away from a toxic situation and get somewhere new.”

And while Rattler is pleased with his new team and school, upgrading on his Oklahoma experience was not going to be hard.

“Anywhere was going to be better, and I found the right place.”

What was the reaction to these comments? Mixed, to say the least.

Rattler had some supporters.

Watch @SpencerRattler actually go off now that he's playing for a coach who cares about him. https://t.co/vPKhJAvBFj

I am still disgusted by the OU fans that booed him. I hope they’ve matured like he has. I hope he goes out and dominates. He deserves it. He gave us everything. Stayed positive when he didn’t have to. I’m excited for him and wish him the best!! 👏👏👏👏👏👏👏👏 https://t.co/cvHoBCxBom

Oklahoma Fans did not handle the disappointing performance of its offense well and heaped all the blame on Spencer Rattler, when it’s clear now, his coach wasn’t locked in.

But there were also plenty of critics, as well, who feel that Rattler isn’t owning up to his own shortcomings.

This dude acts like he didn’t deserve to be benched by his play lol. Let’s see what he do in the SEC 👀 https://t.co/O2d8EBgbdh

Not him describing the school he just left like an ex-girlfriend 😭 https://t.co/NXKc7YEfv4

Let's be real here… One episode of him on QB1 was enough to show me someone who needed to fail at first. Maybe it will humble him a little bit. Time will tell. https://t.co/fiJnJJ77lO

LMAO he IS the toxic situation…. But keep making excuses https://t.co/18yfREpd0w

Now the toxic situation is in South Carolina 🤦🏻 https://t.co/dzx5p54hty

As far as what the truth is, time will tell.

Rattler struggled in 2021. While he completed nearly 75% of his passes, he threw only 11 touchdown passes with five interceptions and was benched during a dismal performance against Texas.

Given that he entered 2021 as a Heisman candidate, Rattler was always going to be a high profile transfer and with that, would face a lot of pressure. But with these comments now fresh on the minds of college football fans, that pressure will be even greater.