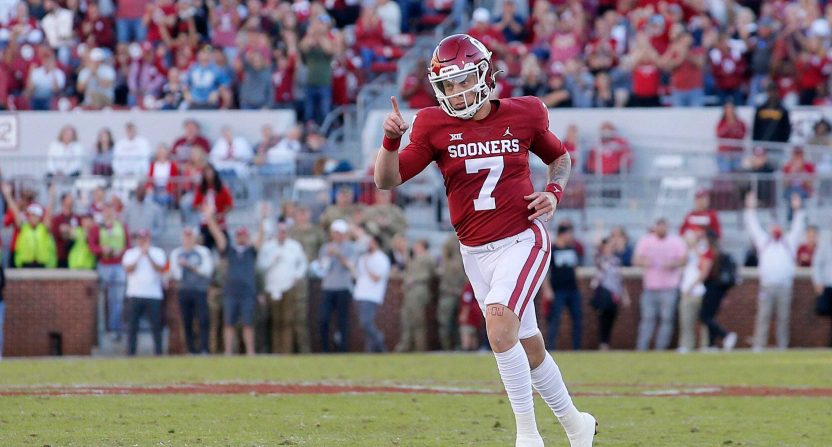 After Lincoln Riley left the Oklahoma Sooners, it seemed to be a foregone conclusion that quarterback Spencer Rattler would follow him out the door. And Rattler, who went from a preseason Heisman Trophy candidate to an on-again-off-again starter by the end of the year, announced he would enter the transfer portal on November 29.

“Sooner Nation, thank you for allowing me to be a student-athlete at this prestigious institution,” Rattler wrote in a Twitter post. “Thank you to every teammate and coach these last three seasons. We won several games together and made memories that I will cherish forever. Special thanks to my family and friends for your support. Thank God for the game of football. It’s the ultimate team sport and brings people and communities together unlike anything else. At this time, I would like to announce that I have decided to enter the transfer portal to continue my academic and athletic career. Thank you again, Oklahoma. I will miss you.”

Rattler threw for 4,595 yards, 40 touchdowns, and 12 interceptions with the Sooners, who finished 10-2 this season.

Despite the way things ended in Norman, Rattler was a hot commodity for a lot of programs looking for a solid veteran to step in and compete immediately. The early assumption was that he might head back towards where he grew up in Arizona to play for the Wildcats or Sun Devils. Some of the other schools said to be on the shortlist included LSU, Oregon, TCU, and Texas A&M.

However, it ended up being the South Carolina Gamecocks who won Rattler’s services, surprising many. Shane Beamer’s squad went 6-6 in his first season as head coach and now he’ll have a veteran quarterback to potentially build next season around.

The reaction on social media to the news that Rattler was headed to the SEC was swift and interesting.

What Beamer has accomplished in a calendar year is truly amazing.

Now this. The leadership, success & excitement around this prog are all b/c of him. Regardless of how SR plays it’s a HUGE get + shows where SC is headed https://t.co/8IiUJeE48N

Interestingly enough, Rattler wasn’t the only player to announce they were transferring to South Carolina on Monday. Former Oklahoma tight end Austin Stogner also announced he was transferring to the school, which marks a potential start of a new trend. Could we see more college football players transfer together as a package deal? It makes for a curious opportunity.

Wonder if Rattler will be the Heisman favorite again 🙄 https://t.co/btuqywbP6e

It might not be enough to overtake Clemson for state superiority but the news is a huge boost for South Carolina as it looks to rebuild and compete in the SEC East.