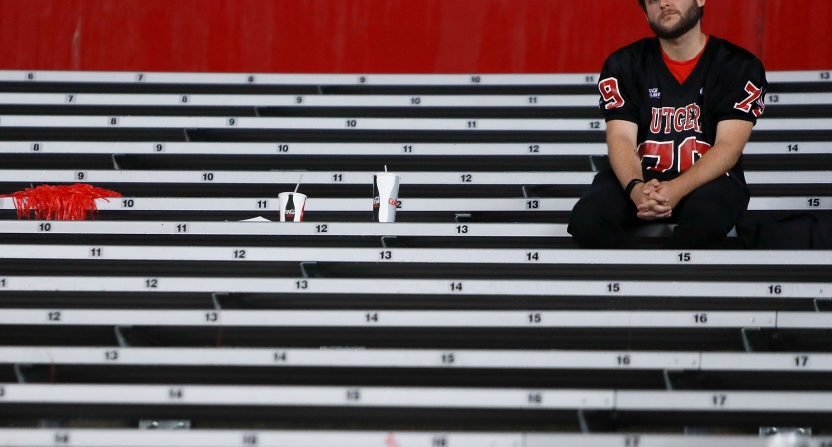 One month ago, the U.S. Supreme Court ruled that the federal ban on sports betting is unconstitutional, opening the door for New Jersey and all other states to legalize the practice. Although the Garden State was the one at the center of the case, Delaware beat them to the punch by legalizing sports betting last week. Now, however, NJ has made good on its intentions and officially legalized sports gambling in its state and betting is underway.

New Jersey governor Phil Murphy traveled to Monmouth Park Racetrack to place the very first bets in the state. Both of his picks were future bets, though one was a bit safer than the other. He put $20 on Germany to win the World Cup, which seems like a decent pick. However, in a savvy move that any governor would want to make, he also put $20 down on the New Jersey Devils to win the Stanley Cup next year. While the Devils made it back to the playoffs this season, that feels like a bit more of a reach (though a politically smart one).

Hundreds of gamblers lined up behind the governor at Monmouth Park, where 21 ticket windows are accessible for sports betting.

Sports betting is underway in Atlantic City as well, where the first legal bet was placed by NBA Hall of Famer Julius Erving. He laid down $5 on the Philadelphia Eagles to repeat as Super Bowl champions. Not exactly reaching for that one, Dr. J.

Of course, no one under the age of 21 can place a bet, but there’s also specific quirk to keep an eye on as well. No one is allowed to place a bet on college athletics events involving schools in New Jersey, which means that all Rutgers and Princeton games are off the board.

On one hand, that seems like the state doing it’s residents a solid by permitting them from doing something really dumb, like betting on Rutgers to win a football game. However, as SB Nation points out, it’s also a very common rule to have in place. Pretty much every other state that introduced a sports gambling bill also prohibited locals from gambling on in-state college events. It’s a “for the best” move meant to prevent point shaving and gambling scandals in sports that are prime grounds for such thing.

Of course, there’s the whole amateur student-athlete thing as well, but, it’s not like that stops anyone from making a buck (except the student-athletes).