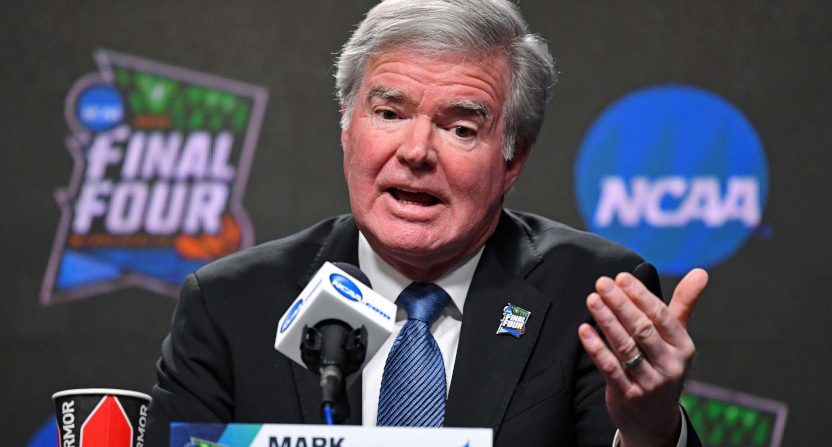 At the Sports Business Journal/Learfield Intercollegiate Athletics Forum in Las Vegas Wednesday, NCAA president Mark Emmert (seen above at a 2019 Final Four press conference)  gave a speech. There were plenty of notable comments in that speech, but one that the internet really latched onto was “Being a university president is the hardest job in America.” Here are some of the many reactions to that:

One of my grandpas was a shrimp boat captain for 40 years. The other was a roofer.

I'll just leave that there.

Definitely a statement one would make if they are totally in touch with reality 🙄 https://t.co/kuB7kj9w0r

finally, the one job too dirty for mike rowe. https://t.co/TO7XRUJJkE

It's not even the hardest job at the university. https://t.co/B5wZbUrG1Q

Mark Emmert kissing the ass of the school presidents who continue to keep him employed is hardly surprising. https://t.co/NnyFiMNQDs

Every other job in America to Mark Emmert: https://t.co/21pjbkgi3C pic.twitter.com/Kn3DE81kxK

Mark Emmert is just standing below the basket and begging at anyone who walks by to dunk on him at this point https://t.co/ywwC9VPzNR

Mark Emmert’s PR guy might actually have the “hardest job in America” https://t.co/FaKGnF821I

This also led to wider criticism of Emmert:

Beyond that, it’s notable that Emmert made at least one other very-dubious claim during these remarks:

I don't know if Emmert was including baseball as an "Olympic sport," but for a story I researched about five years ago, roughly half to one-third of SEC baseball programs are profitable. https://t.co/0z89A9UO3s

Yeahhhhh I don't think this is true eitherhttps://t.co/Pfxo6JEM5E

“Profitable” is always difficult in college athletics, as there are plenty of ways that money can be moved around to show profits or losses for an individual component of a wider athletic program. But it seems likely that there are at least some baseball programs, possibly some gymnastics programs, and perhaps others that are “profitable” in terms of revenues brought in versus expenditures.

And it should be kept in mind that part of any “profit” calculation for individual sports programs is about TV rights. The top rights there outside football and men’s basketball don’t bring in anywhere near what they’re worth on their own. That’s because their championships in particular are televised as part of a wide-ranging 24-championship bundle that sees the NCAA take less money for top events in order to get lower-level events on TV.

The largest case there is women’s basketball, which is usually kept separate from the “Olympic sports” category (although it’s in the Olympics and some of these other programs are not; the general term isn’t a great one, but the alternative of “non-revenue sports” seems worse still), but other potentially-lucrative championship rights are also hamstrung by that on a pure accounting basis. That deal may or may not be reasonable overall; there’s at least a case  for this kind of trading of rights at below-market value to ensure coverage of properties that wouldn’t normally be televised. But that deal, and conference network deals along similar lines, does mean the revenue attributed to top sports and programs outside football and men’s basketball is artificially low, with them being used as part of a package to get coverage for sports that draw fewer viewers.

In any case, it’s certainly notable that Emmert managed to draw a lot of flak for his comments at this summit. And the “hardest job” comment in particular is truly ridiculous; there are absolutely challenges to being a university president, but there are a lot of seemingly “harder” jobs out there, and most of them don’t come with the millions of dollars university presidents tend to make.

Granted, Emmert isn’t popular with the public, and he doesn’t really need to be; he’s often a useful target for the public ire directed at the NCAA. But still, it would seem that he could phrase his remarks a little better to avoid creating so much ire in the first place. If he’d simply said things like “Being a university president is a tough job, especially now” or “Most Olympic sports are not cash-flow positive,” there wouldn’t have been much of a story here. But his need to go over-the-top drew a lot of understandable backlash.