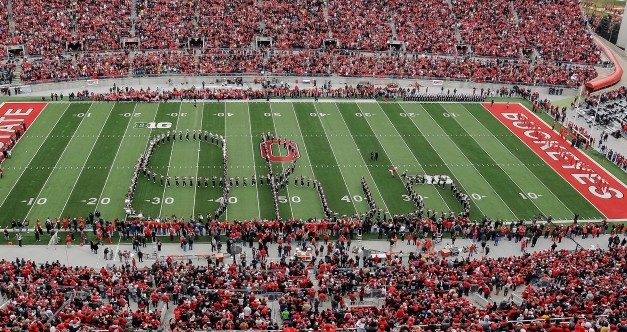 If you got a football fix last weekend with a moderate spring football schedule, consider that your appetizer. This weekend serves up a hearty meal of big-time programs taking the field for their respective spring games. If the weather cooperates, that is.

Inclement weather has been the story of spring football, with a handful of schools rescheduling or canceling their spring games entirely. In the grand scheme, losing a spring football game doesn’t do much harm, but that may depend on how seriously a school treats its spring game.

Weather forecasts washed away Michigan’s spring game. Jim Harbaugh has taken measures to improve the atmosphere and importance of the spring game in Ann Arbor after the program cared very little about its impact for decades.

But with rival Ohio State setting a national record for spring attendance in 2016 and a conference with some of spring football’s heavy hitters (Ohio State, Nebraska, and Penn State are routinely among the national leaders in spring game attendance), making the spring game more of an event has been a focus for Harbaugh and the Wolverines. Not having an opportunity to showcase the program in a spring atmosphere for recruits (in primetime) is a minor drawback, but it’s nothing more than a minor blip.

Minnesota rescheduled its spring game from Saturday to Thursday night, while Wisconsin decided to cancel the game entirely. Iowa State is also calling off its spring game, and a few more may get rained out after this post goes live. With bad weather rolling through much of the Midwest, check the forecast and prepare for the elements. Leaving early could also be a possibility, as a running clock could bring a faster end to the game.

But even with a few cancellations, the weekend still has a loaded spring football schedule, including two teams from last season’s College Football Playoff and the defending Big Ten champions. Here are all the games you can watch from home.

All games scheduled for Saturday, April 14. All times are Eastern.

Note: Big Ten Network coverage may be regionalized or available on overflow channels, in addition to streaming. Check your local listings.

Believe it or not, but J.T. Barrett is no longer the starting quarterback for the Buckeyes. In 2018, the competition is on to find a replacement, and Urban Meyer is not short on candidates. Joe Burrow and Dwayne Haskins have limited experience, and Martell is the prized recruit Ohio State fans are most excited about. This will be Martell’s opportunity to show whether or not he is prepared to start, or if Meyer will carry this competition over to the summer (which may be the plan regardless of what happens).

Ohio State will be loaded in the fall and should be the Big Ten favorite going into the new season. After missing out on the College Football Playoff, expect the Buckeyes to play with a chip on their shoulders, which may set the tone for the spring game.

Although Ohio State is monitoring the weather situation too, the Buckeyes have already announced that the spring game is sold out. With Ohio Stadium undergoing renovations, a max crowd of 79,000 will still be accommodated. How many show up remains to be seen, but Ohio State is already the leader in the clubhouse for spring attendance this season.

The defending Big 12 champs need to replace veteran quarterback (and Heisman Trophy winner) Baker Mayfield. Head coach Lincoln Riley has suggested the competition is down to Kyler Murray and Austin Kendall. Odds are pretty good that the job goes to Murray in the fall, even if Kendall turns in a more impressive spring game.

The spring game is just one sliver of the work done in the offseason, and overreacting to the one time you see a team in the spring is unwise. Coaches are monitoring what they see in practices in the spring and summer to make their decisions. That said, Murray can potentially put this to rest with a solid showing.

But Oklahoma also has holes to fill elsewhere on the roster, including the offensive line. The defense may also adopt more nickel packages. Will that help in the Big 12?

Florida State’s woeful season in 2017 was not an indication that the program is a lost cause. It shouldn’t take very long for Willie Taggart to get things back in order in Tallahassee and resume competing for ACC titles on a regular basis.

Hopes will likely rely on the health of quarterback Deondre Francois, but we may not see much of him in the spring game as he continues to recover from last season’s injury. That means James Blackman will get a chance to run an offense expected to have some new looks to it with the new coaching staff. Watch to see how much the offense opens up, how effectively and efficiently it is running. Don’t expect a well-oiled machine just yet.

Last year’s ACC champion, Clemson, will be in action with fewer question marks on their agenda. Clemson’s biggest concerns probably come at wide receiver, but the rest of the team should be in great shape after a third straight trip to the College Football Playoff. Last year’s team wasn’t quite ready to make another title run, but ending the season on a losing note should rev things up for the spring in Death Valley.

Miami is also looking to turn a page after dropping three straight games to end the 2017 season (the regular season finale at Pitt, Clemson in the ACC Championship Game, and Wisconsin in the Orange Bowl). Mark Richt has gotten Miami heading in the right direction, and that should continue even with some defensive holes to plug this season. The defensive line will be the focal point for the Hurricanes this weekend.

Additionally Virginia Tech and Louisville are in action on Saturday. The Hokies are in pretty good shape without too much to worry about this spring, but Louisville has to replace Lamar Jackson. But the drama is pretty much non-existent with Jawon Pass as the expected successor. The key for the Cardinals will be consistency on the offensive line. Better protection in 2018 is a must.

4. Will USC look like a team rebuilding or reloading?

The Trojans are coming off a Pac-12 championship a year after winning the Rose Bowl. This may be the biggest test for head coach Clay Helton as his team now must replace some huge names on offense, including quarterback Sam Darnold and running back Ronald Jones II. USC will either prove they have the talent ready to step in and continue the upward swing for the program or show signs of a team that needs to work incredibly hard to remain a Pac-12 contender.

Week 1 of USC Spring Football is in the books. #FightOn pic.twitter.com/qHxigwi5u1

Freshman J.T. Daniels is expected to be the team’s starting quarterback, so this will be our first look at him in action. Projected starting running back Stephen Carr is out with a back injury, so that allows the other backs to get some reps and make some plays. With the defense pretty well-established, the USC offense may not provide much indication of what to expect in the fall.

Elsewhere in the Pac-12, Kevin Sumlin gets a chance to show what he brings to the Arizona football program in the last spring game of the day. That should be fun to see a day after Herm Edwards does his thing at Arizona State on Friday night.

5. Will Florida now have an offense with Dan Mullen as head coach?

Similar to their in-state rivals from Tallahassee, Florida shouldn’t take very long to bounce back after a dismal 2017 season. Dan Mullen has arrived on the scene and his first major task in turning the Gators back into an SEC threat is to build an offense. With what he has in place right now, it will be a work in progress.

As he looks to re-energize #Gators fan base, Dan Mullen jokes, 'When I was back in college, I didn’t get the same reception in sorority houses I do now': https://t.co/rsb8iZMWqJ pic.twitter.com/icHHgZBjas

Mullen has been an influence in making Tim Tebow and Dak Prescott top college players, so the quarterbacks should be the highlighted focus for Florida. Feleipe Franks may be the top candidate given his prior experience, but Emory Jones has the dual-threat tendencies Mullen likes to utilize within his offense.

But if neither can justify ranking one ahead of the other, the discussion about using two quarterbacks will carry over to the summer. Mullen isn’t one to shy away from that idea if he feels it gives Florida the best chance to win.

Florida’s offense will have to adapt to more than the quarterback position. For Mullen’s offense to work, the offensive line needs to be prepared for the new style of play too. With Florida’s strength coming on the defensive side, the status of the offensive line may be more pivotal to Florida’s growth than the quarterback position coming out of the spring. That should be a major focus for the spring game in Gainesville.