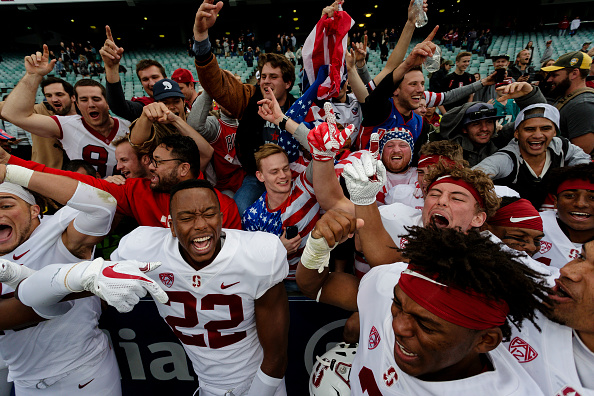 It’s nothing new for the Stanford Cardinal to excel at football. Since 2010, the program’s failed to record double-digit wins just once, has four top-10 finishes and also won three Pac-12 championships. They’re not a blueblood of the sport by any means, but they’ve elevated themselves to a similar playing field in recent years.

Saturday’s 62-7 blowout victory over the Rice Owls in Sydney, Australia shows they may not be done rising just yet.

Stanford comes into 2017 ranked 14th in the polls and expectations are high around what the program can achieve. There are plenty of tough contests on the schedule, including Week 2’s trip to USC, but this Cardinal team is a legitimate Pac-12 contender. The depth chart is a nice mix of experience and youth, and frighteningly (for everyone else), they appear to have easily plugged holes from last season.

Stanford’s been clinical on offense before — 2013 and 2015 were both top-20 efforts in terms of offensive S&P+ — but the victory over the Owls was downright dominating. Unlike most of its Pac-12 brethren, the Cardinal typically like to beat you in the trenches and suffocate you. Recent recruiting has allowed them to not only embrace that strategy, but do it at a level few in the country can right now.

It’s only going to get better as the program’s recent additions assimilate.

Despite just a 14-player class in 2017, Stanford ranked 14th overall in the 247Sports composite. That list included three five-star players — two of them (Foster Sarell and Walker Little) being on the offensive line. Stanford ranked 16th in 2016 with a full class of 25 players, and that collection also included two top-300 O-linemen. The 2015 class was focused away from the line, but still finished 24th while bringing in current skill position standouts Bryce Love and Cameron Scarlett.

But you get the picture. Despite strict admission standards that would (and do) hamper many schools, the Cardinal have made it the primary feature of the program. That, along with a clear coaching direction and identity under David Shaw has just begun to elevate Stanford to new heights.

The thought going into this season was that the work wasn’t quite done yet. In his season previews, SB Nation’s Bill Connelly said the Cardinal were probably a year away from greatness, but also conceded they could still win the Pac-12 this year. Much of that caveat was taking into account the program’s losses (including two first-round picks in 2017). But it also looked at how Stanford’s recruited vs. the truly elite college football schools.

The Blue-Chip Ratio uses recruiting rankings to cut the list of national title contenders to those that have the most elite talent on the roster. While recruiting rankings can sometimes miss, data also fails to lie with regard to national championships. For more than a decade, college football’s title winner has had at least 50 percent blue-chip (four- and five-star recruits) on its roster. That trend continued last year when Clemson won it all. Stanford isn’t on that list… yet. But it’s getting closer.

Stanford’s smaller 2017 class won’t necessarily move the needle too much in terms of raw numbers, but last year showed them to be on a short list of programs nearing the line. The Cardinal were at 33 percent blue-chips heading into 2016. That number’s slightly higher now, but still a bit short of the 50 percent mark. However, being short of that doesn’t preclude Stanford from making a College Football Playoff appearance.

Fellow Pac-12 North contender Washington was at 26 percent going into last season and made the playoff. Michigan State was at 21 percent before its 2015 run. Oregon was at 41 percent prior to 2014, and made the National Championship.

This isn’t a bold prediction that Stanford will win it all this year because of one blowout victory over Rice on another continent. But the way in which the Cardinal won — a show of force in the trenches that didn’t give many hints they were even exerting themselves that hard — does seem to be an announcement they’ll be a force in 2017. Rice may also just be terrible. But that AND Stanford being an impressive contender could both be true without causation after one week.