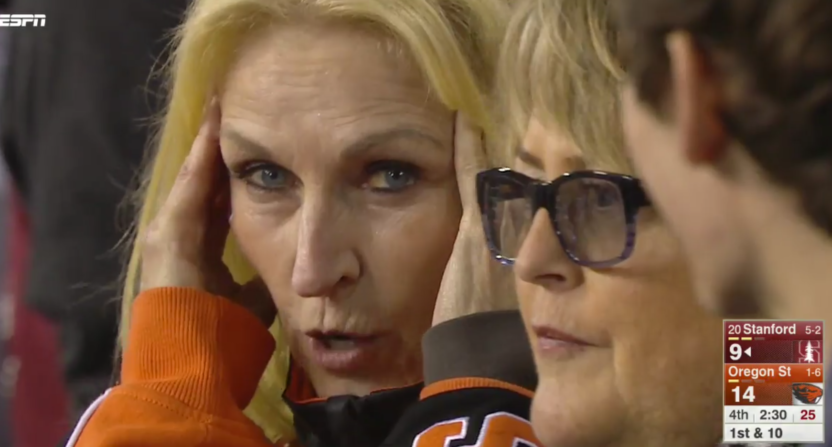 This weekend of college football is already off to a dangerous start. Hapless Oregon State, two weeks after parting ways with their head coach, nearly pulled off an upset against No. 20 Stanford, but a late turnover led to Stanford snatching a win that looked improbable for the first 57 minutes of the game. The Cardinal were without the nation’s leading rusher, Bryce Love, due to a nagging ankle injury suffered a couple of weeks ago, and his absence certainly played a key role in how the game unfolded — and nearly unraveled — for the Cardinal. Fortunately, Stanford managed to survive and now remains in a fascinating position in the Pac-12 championship hunt.

First, the fumble that flipped the emotions of the Oregon State fans 180 degrees…

And the game-winning touchdown thrown by Keller Chryst…

Even without Love on the field, Stanford should have had no business taking a loss on the road against Oregon State, but they certainly had to fight for the win much harder than anyone anticipated. Although the Beavers may be playing a bit more inspired football right now for interim head coach Cory Hall, Oregon State owned the Pac-12’s 11th-ranked rushing defense. Entering Thursday night, Oregon State had been allowing an average of 200 rushing yards per game. Stanford was without one of the top running backs in the country, but the Cardinal still only managed to pick up 81 rushing yards as a team. Cameron Scarlett, Love’s primary backup, led the way with 72 rushing yards on 17 carries.

If Stanford had Love available for the game at whatever percent possible, odds are probably pretty good the Cardinal would have fared better with the football. Love has been breaking long runs all season long, and it would be unlikely Oregon State would have been able to lock down on him all night. The Cardinal were as many as a three-touchdown favorite prior to the announcement Love would be sitting out, at which point the line dropped a few points in the final hours before kickoff. That is how valuable Love is to the Stanford offense.

With Stanford picking up the win without their best player (and anyone who watched this game now surely knows just how important Love is to this offense), the Love Heisman campaign can continue forward without a hitch. For a while, it looked as though the discussion would be focused on whether or not Stanford losing helps or hurts Love’s campaign. A loss would have taken some of the steam out of the Stanford season but also would have shown just how much of a difference maker he can be to the team. Because the offense looked as choppy as it did, even in victory without him on the field, Love seemed to earn some points in the Heisman race anyway.

Now begins the pivotal two-game stretch for Stanford. It will be one that will ultimately help to shape the Pac-12 North, and with it the entire Pac-12 championship pictures. It will also be the point of no return for Love in the Heisman race to determine if he can reach New York neck-and-neck with Saquon Barkley of Penn State or if he may lag behind.

Stanford, now 5-1 in Pac-12 play, will play at Washington State (4-1 in Pac-12) next week with a couple of extra days to prepare. After that is a home showdown with Washington (3-1 in Pac-12 play). How soon Love can return to the field may determine the fate of the Cardinal in the Pac-12, but for now, they remain one of the teams to keep an eye on because they can cause some havoc in the Pac-12 playoff picture. The scenarios including a two or three-loss Pac-12 champion Stanford (Stanford still has to play Notre Dame, which won’t affect the Pac-12 title race) are still in play for another week thanks to a gift on the road from a team that finds winning incredibly difficult on a regular basis.