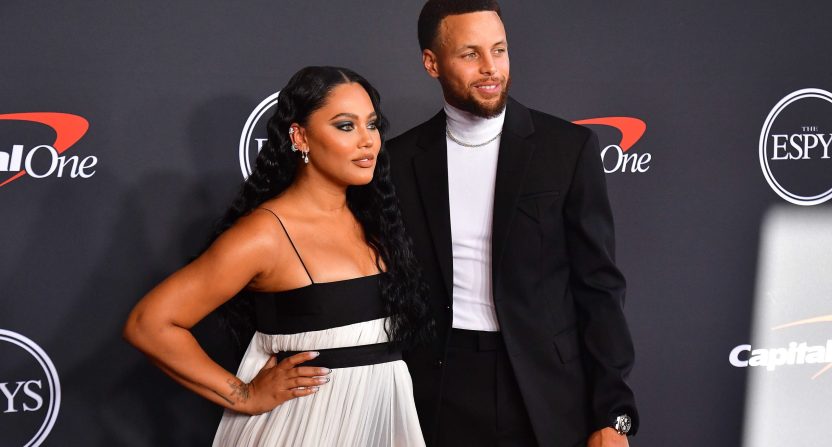 Stephen Curry has turned into one of the best point guards in NBA history, winning four NBA championships with the Golden State Warriors along with two MVP trophies amongst many other accomplishments in his NBA career.

However, at one stage of his basketball career, he was just a kid leading the small town school of Davidson on a miraculous NCAA Tournament run, and Davidson announced that they will honor his time at the program on Wednesday.

Davidson is inducting Curry into their Davidson Athletics Hall of Fame on Wednesday, along with retiring the No.30 jersey that he wore during his time with the program.

Stephen Curry will be honored by @DavidsonCollege today as a graduate, as a Davidson Athletics Hall of Fame inductee, and with his No. 30 college jersey being retired. pic.twitter.com/BzqSmEcUj9

Curry was previously not eligible to be inducted into the program’s Hall of Fame due to him leaving early for the NBA and not finishing his undergraduate degree, but he recently announced that he went back to school to finish his degree in Sociology.

The star point guard led the Davidson Wildcats on a miraculous run to the Elite Eight in 2008, before finally falling to basketball powerhouse Kansas Jayhawks, who would go on to win the entire tournament that season.

That success was enough to get Curry on the national stage, which he parlayed into getting drafted with the 7th pick in the 2009 NBA Draft, and the rest is history with his excellent career with Golden State.

Many have taken to social media on Wednesday to share their favorite college moments of Steph from Davidson on the day he will be inducted into Davidson history forever.

Davidson was unable to retire Stephen Curry’s jersey due to him not getting his diploma.

This May, he finished his final class for his degree.

His No. 30 will now be retired into their Hall of Fame. 🔥

.@StephenCurry30 will have his jersey retired by @DavidsonCollege today.

Throwback to Steph dropping 40 in an upset win over Gonzaga in the 2008 tournament. 🔥pic.twitter.com/n7thha6gE7

Quite a spectacle already here at Davidson, where Steph Curry will soon be back to go through his graduation ceremony, get his #30 jersey retired and go into the school’s hall of fame.
More than 5,000 expected to be in attendance. Feels like a pre-concert vibe. @StephenCurry30 pic.twitter.com/SOAEs1oEiO

Curry still clearly loves his time at Davidson, as he was seen congratulating his former coach Bob McKillop on social media back in June when McKillop retired after 33 years as head coach of the Davidson Wildcats.

“Love you Coach! Thank you for everything you’ve done for me, my family, Davidson and every person you’ve impacted along the way.”

Love you Coach! Thank you for everything you’ve done for me, my family, Davidson and every person you’ve impacted along the way. #TCC #greatdaytobeawildcat https://t.co/hG266yUyst

It’s hard to think back to Curry being in an underdog role at Davidson considering the dynasty that the Warriors have built around Curry over the years, but he was once just a mid-major star looking to reach the NBA level.

Considering all he has done in the sport of basketball since his time at the program, it seems well deserved that he is finally being inducted into the history books at Davidson.