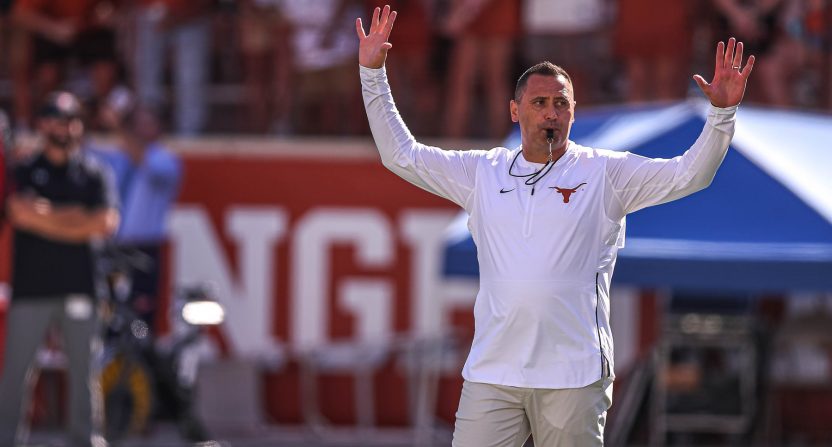 Texas is back (in the news again).

It’s been a wild first year for Steve Sarkisian as head coach of the Texas Longhorns. The school made its intentions known to leave the Big 12 for the SEC. The Longhorns made it seem like they might be really good only to remind everyone they are very much not. And then #MonkeyGate happened.

As a refresher, word leaked on November 1 that a monkey owned by the stripper girlfriend of Texas special teams coach Jeff Banks had bitten a child on Halloween. The girlfriend, who is known professionally as Pole Assassin, then took to Twitter to defend her monkey and blame the child for the incident, even going as far as to post a video of where the monkey lives.

As you might imagine, that story would appear to be the very definition of a “distraction” for a college football program, especially one fighting for its bowl eligibility life. Not so, says Sarkisian, who broke his silence on the monkey matter during Thursday’s press conference.

Sark passes when asked about the monkey story involving an assistant coach. Says that's a personal matter. Does not discuss personal matters in public. "Not a distraction at all."

“Not a distraction at all,” said Sark.

That personal matter certainly got pretty public for a while there. And the incident may have also jeopardized Banks’ ability to get the Washington State job, which he was considered a candidate for.

But at the end of the day, it makes a lot of sense for Sark to not take the bite on all this monkey business.