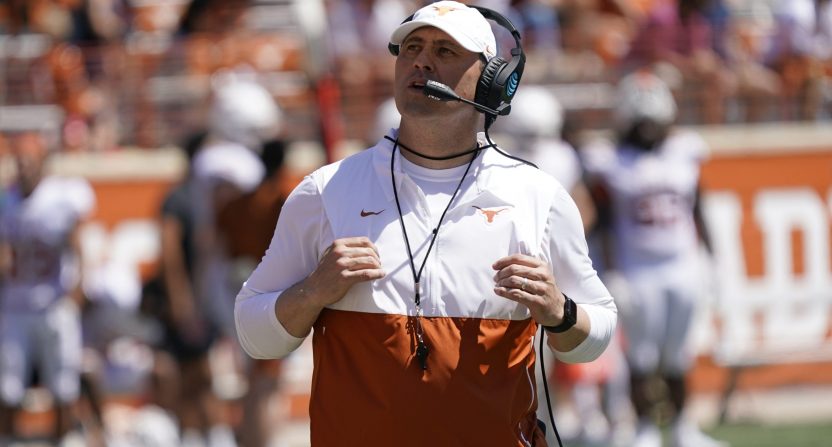 What did Steve Sarkisian know and when did he know it? We might never find out. Sometimes the truth and the official record are not synonymous. And sometimes what we’d like to know is obscured intentionally to keep us forever guessing.

It seems reasonable to assume that Sarkisian knew at least of the possibility that he might be the face of the University of Texas entering a brave new college football world. Texas, along with Oklahoma, could join the SEC as soon as 2022. That alone is a seismic shift in the balance of conference power. But also consider the probable expansion of the College Football Playoff from four teams to 12 as soon as 2023.

Hook ‘em. Longhorn fans haven’t felt this good since the glory days of Vince Young, who won the program’s 2005 national championship. Not only have they upgraded by leaving the middling Big 12, but they also get to tweak former rival Texas A&M as a bonus.

There’s a lot going on, and it’s up to Sarkisian to safely steer until Texas reaches its destination. Funny. A year ago, we never would have guessed any of this. Tom Herman was in his third season at Austin with three straight bowl victories. Sure, the program went a disappointing 8-5, but that was a vast improvement over three straight losing seasons under Charlie Strong. In 2020, the Longhorns finished 7-3 in a pandemic-shortened season, won a bowl game, and finished No. 19 in the Associated Press Top 25 poll.

For most schools, that would be enough. Especially considering the circumstances. Texas is not most schools. Herman was booted out despite a buyout of $15.4 million at a time when most programs were feeling a budget crunch. Then Texas made a shocking move by hiring Sarkisian, Alabama’s offensive coordinator.

Viewed in a vacuum, poaching anyone from Nick Saban’s staff is usually viewed as smart. But “Sark” isn’t just anyone. The last time he was in charge, he was fired by USC in 2015 following what the Los Angeles Times reported as “a string of incidents that included Sarkisian appearing intoxicated at a football booster event in August and seeming not himself during a recent game.”

Sarkisian later lost a $30 million wrongful termination lawsuit, but did enter alcohol rehab. His comeback took him from being an Alabama staffer, to becoming the Atlanta Falcons offensive coordinator, to returning to Alabama.

Now he’s the face of Texas at a pivotal juncture. Texas is one of the best jobs in the sport with a rich athletic department, wealthy donors, famous alumni (both athletic and non-athletic), and a fertile in-state recruiting base. But it’s also a place where the reality of where it is in the modern pecking order isn’t necessarily aligned to what expectations are.

Texas has one national championship in 50 years. Since 2000, Alabama has won six, LSU three, Clemson two, Ohio State two, USC two, and Florida two. And yet, Texas will insist it’s on par with those powers. We’re about to find out exactly how the Longhorns stack up, because now they have a clearer path to a title in the toughest conference in America.

Since the advent of the College Football Playoff for the 2014 season, an SEC team has played for the championship six out of the seven years. In 2017, two SEC teams (Alabama and Georgia) faced each other in the title game. With the looming expansion of the postseason, that means more opportunities for the league to gobble up more spots.

In short, there will be no excuses for Sarkisian. He’ll have everything he needs to build a contender. Is he the right guy? That’s a difficult question to answer. His on-the-field accomplishments are pedestrian. As a head coach, he went 34-29 at Washington in five seasons. He landed the USC job because of his previous experience as a quarterbacks coach and offensive coordinator under Pete Carroll. In his first year with the Trojans, he went 9-4, but was ousted the following season after the 3-2 start.

Fired coaches rarely get another shot at a blueblood school. That’s a hard sell to influential boosters. However, when Sarkisian joined Alabama’s staff in 2019, we could see that he was angling for a return. Being an assistant for Saban might be the best springboard in college football. Sarkisian is the 12th Saban assistant at Alabama to land a head coaching job.

Last season, the Crimson Tide won the national championship with an offense that was second in the nation in points (48.5), third in passing yards (358.2), and fourth total yards (541.6). Sarkisian gets credit for that. Although, it’s also worth noting that Alabama’s offense featured five players taken in the first round of the NFL Draft.

How fast can Sark get Texas back to national prominence? The Longhorns are picked to finish third in the Big 12 this season, and sophomore running back Bijon Robinson and senior defensive back D’Shawn Jamison were named to the All-Big 12 preseason team.

The incoming recruiting class was a disappointment, especially losing twin offensive linemen Tommy and James Brockermeyer to Alabama. Not only were they Texas high schoolers, but their father is Blake Brockermeyer who played for the Longhorns.

But that was under the old administration. With the lure of a new coach, new conference, and new playoff system, Texas has its best chance to succeed.

It’s just surprising to see the smiling face of that optimism is Sarkisian.