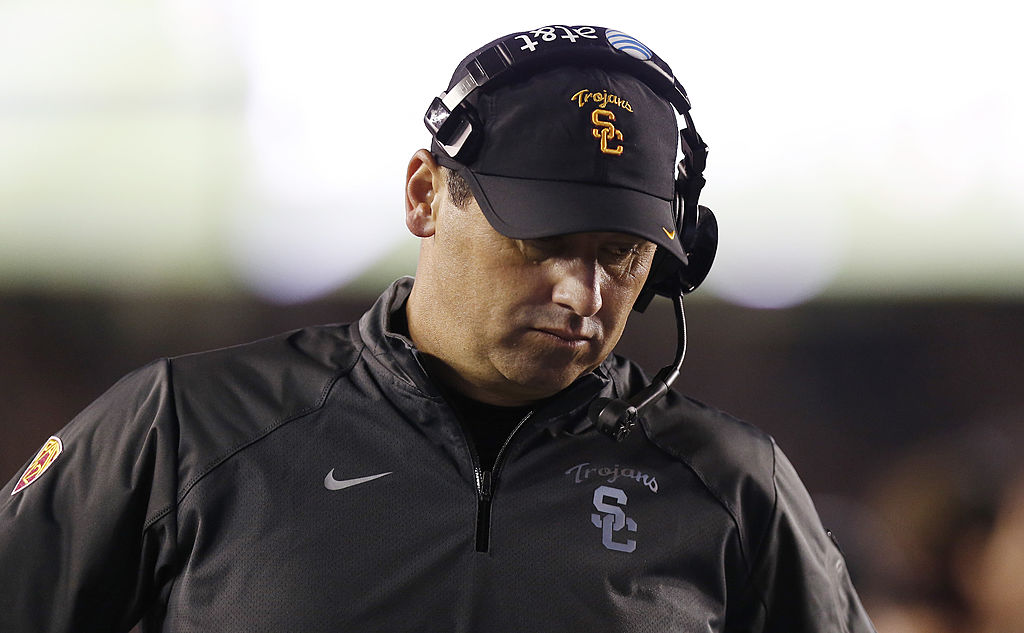 The divorce between Steve Sarkisian and the University of Southern California was an ugly one, and now the lawsuit thrown by Sarkisian at his former employer is heading to arbitration, per the Los Angeles Times.

Sarkisian was let go after a series of alcohol-related incidents, including an obscenity-laced speech at the annual Salute to Troy preseason event and allegedly showing up drunk to job functions including team meetings and practices.

Things got so bad that Sarkisian was asked to take a leave of absence in mid-October after showing up to practice in an incapacitated state. Instead, he was fired later that same week and Clay Helton was asked to take on the interim head coach role for the rest of the 2015 season.

Helton eventually won the permanent head coaching job, while Sarkisian went forward with what looked like it would be an ugly legal battle with his former employer.

Instead, the two sides are going to go to arbitration rather than a full trial in civil court.

Sarkisian has long held that USC athletic director Pat Hayden dismissed him instead of allowing the coach to seek treatment for alcoholism, while USC has fired back with the claim of “half-truths” and “outright falsehoods.”

The former USC head coach is looking to get the remaining $12.6 million on his contract in his suit, and his team feels confident that he’ll prevail regardless of the process or decision-makers.

“Mr. Sarkisian has always been and remains confident that he will prevail regardless of who the decision maker is,” Alan Loewinsohn, the former coach’s Dallas-based attorney told the Los Angeles Times via e-mail.

So, why head to arbitration instead of going to trial? It’s all about the public knowledge, and an arbitration hearing allows for the depositions and related proceedings to be kept private between the parties involved.

Ironcially, Sarkisian initially fought against arbitration, while USC fought for it. USC’s attorneys even argued that the private nature of arbitration would help Sarkisian avoid some very bad information hitting the public airways.

“Presumably, Mr. Sarkisian, who is currently looking for new coaching opportunities, would have an interest in preserving the confidentiality of his alleged substance abuse and treatment,” the filing said.

Rather than dragging this out in an ugly public battle, Sarkisian and USC are going to do battle in private. It’s a move that even outsiders believe is best for all parties involved.

What remains to be seen is if the arbitrator is even going to let this thing play out, given a two-page agreement signed by Sarkisian when he became head coach. That two-page agreement “to arbitrate virtually all claims against the school.”

Just when will we get a resolution to what could’ve been a nasty public lawsuit turned private arbitration? There is little timeframe for when arbitration needs to happen in this case, so the waiting game begins.