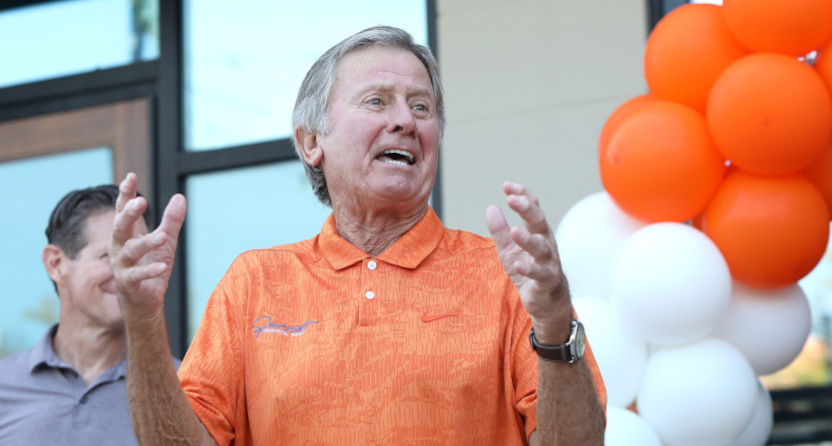 Nick Saban’s comments this week about Jimbo Fisher, Deion Sanders, and their players’ NIL deals (in particular, that Fisher’s Texas A&M squad “bought every player on their team,” and that Sanders’ Jackson State team “paid a guy a million dollars”) have sparked all sorts of reactions throughout the college football world. Some of those have included Fisher unloading on “despicable” Saban and saying “Go dig into his past,” and Sanders offering pushback but also measured analysis of Saban’s goals with those comments.

The Fisher-Saban drama in particular has led to a lot of third parties weighing in, from the SEC (their conference, not the governmental regulatory agency) to Texas A&M athletic director Ross Bjork to media figures Paul Finebaum and Colin Cowherd to other active coaches like Lane Kiffin and Mike Leach. And now, a prominent former coach with history with both Saban and Fisher has weighed in.

That would be former Florida and South Carolina coach Steve Spurrier (seen above last August at an opening ceremony for his Gainesville restaurant), who’s also someone known for his willingness to say what he thinks and take public shots at opposing coaches and teams. Spurrier spoke to Mike Griffith of DawgNation, and he had quite the lines on this.

“I don’t know why (Fisher) is mad at Saban,” said Spurrier, a College Football Hall of Famer known best for winning six SEC Championships in 12 years as a coach at Florida along with a Heisman Trophy as a player.

“Did Saban say something that wasn’t true?”

…“I don’t think Saban told any lies in there, so I don’t know what he was mad about,” said Spurrier, who is still the most recent SEC East Division coach to beat Saban in a regular-season game, back in 2010 while coaching South Carolina.

“Since (Fisher) beat him last year, I guess he can talk now,” Spurrier said, referring to Fisher becoming the first former Saban assistant to beat the legendary coach last season.

“He hasn’t beat much of anybody, but he beat Saban last year. But they haven’t won the division or anything since he’s been there.”

As Griffith notes, Spurrier posted a 3-1 career record against Saban with Florida (2-0) and South Carolina (1-1), but went 0-1 against Fisher (a 2010 Peach Bowl loss to Fisher’s Florida State team). And Spurrier was recently in Birmingham to receive the Nick Saban Legacy Award, honored alongside the late Eddie Robinson, and Saban said plenty of nice things about him there. (Spurrier returned the favor at that time, even if he’s offered some criticism for Saban in the past; however, even that has been pretty mild by his standards.) So it maybe makes sense that Spurrier is taking Saban’s side here. In any case, it’s certainly notable to hear him weigh in.