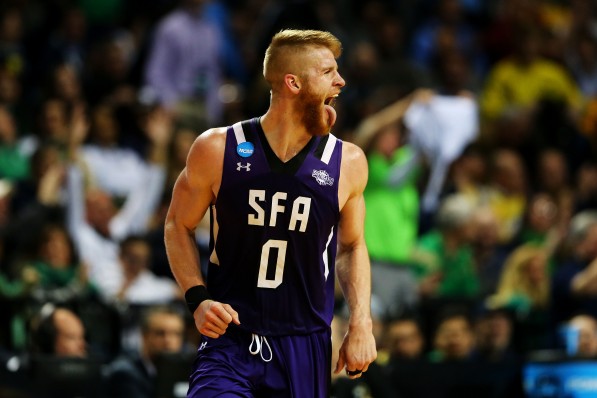 The Stephen F. Austin Lumberjacks did not record the biggest upset on first-round Friday in the 2016 NCAA Tournament. The Middle Tennessee Blue Raiders attained that honor when they shocked Tom Izzo and Michigan State earlier in the day.

The Lumberjacks will have to settle for “second,” but they finished in first place after 40 minutes against the West Virginia Mountaineers. This 14-3 upset will take a backseat to Friday’s 15-2 stunner with Sparty, but Stephen F. Austin took a backseat to no one in the course of a composed and authoritative takedown of another bewildered Big 12 team in March.

Stylistically, this game bore little resemblance to Middle Tennessee’s triumph over Team Izzo. This was a defense-first grinder, whereas Middle Tennessee ran set after immaculate halfcourt set to hang 90 points on Michigan State. In this game, SFA won not by making the game pretty on offense, but ugly through its defense. With 4:00 left in regulation, by the time the Lumberjacks had amassed a 62-51 lead, the Southland Conference champions had already forced 18 West Virginia turnovers.

Then came the final few minutes, when WVU committed even more mistakes in rapid-fire fashion:

They're the Lumberjacks and they're OK.

There’s irony in this, because the Mountaineers and their fans call themselves “Press Virginia,” due to a trapping, pressing style used at all times by coach Bob Huggins. WVU prides itself on causing the opponent to unravel in a sea of giveaways. Moreover, that style has lifted the Mountaineers above their talent level.

Huggins has done wonders to keep WVU in the upper tier of the Big 12. For roughly a quarter of a century dating back to his days at Cincinnati, Huggins has regularly churned out winners because they play harder than everyone else. This is what West Virginia banked on against the Lumberjacks, just as it does against every team it faces: “We will wear you down and force you to make mistakes.”

Instead, that’s what SFA did to the Mountaineers on Friday.

Stephen F. Austin didn’t win most rebounds. The only reason this game was close as long as it was — before SFA sprinted away at the very end — is that West Virginia relentlessly pounded the glass. Effort was not a problem for the 3 seed, but everything else was. WVU hit only 31 percent of its field goals and only 3 of 18 threes. Given how many turnovers the Mountaineers coughed up, 21 made foul shots weren’t nearly enough to offset those deficient numbers on live-ball shot attempts. Every turnover took away a chance for West Virginia’s shooters to develop a rhythm. SFA’s ability to contest shots in or near the paint minimized the Mountaineers’ clear advantage on the backboard.

Given the train-wreck quality of West Virginia’s offense, the 14 seed from the Southland merely needed a competent, low-mistake offense with at least a few big shots such as this one:

The Lumberjacks’ role players provided just enough on this night. Everything else was delivered to the 14 seed’s table by Thomas Walkup, SFA’s Star For the Ages.

Walkup was, without question, the best player on the floor in Brooklyn’s Barclays Center. He not only scored 33 points and hit 19 of 20 foul shots to fend off every push West Virginia made in the second half. What Walkup also did will never show up in a box score or play-by-play log.

Consider this not-very-sexy video clip. It’s hugely instructive, even though there was no 3-point make or finished dunk (West Virginia fouled on the play).

What happens in the clip is simple enough to appreciate, though: Walkup encountered a double-team 35 to 40 feet from the basket. A lot of ball-handlers will bend their body and lean to the side, or worse, pick up their dribble in the face of such pressure. Notice how Walkup stays upright to maintain full vision of the floor. He calmly slots a bounce pass along the sideline. His teammate doesn’t take the fool’s gold three-pointer WVU wanted Stephen F. Austin to take (since West Virginia wanted to speed up the game and create more possessions). The Lumberjacks work the ball, use up several more seconds, and get a much better shot than a three-pointer.

It was a spectacular performance… one which does not have the feel of something unsustainable. Walkup can definitely do this against Notre Dame or Michigan in the round of 32.

A 14 seed has reached the Sweet 16 before. Cleveland State (1986) and Chattanooga (1997) did the deed. Given how well Thomas Walkup controls the tempo of a game (and hits foul shots), Stephen F. Austin gives every appearance of being able to beat Notre Dame or Michigan if it tends to the basics of basketball.

Give SFA this much after calmly absorbing “Press Virginia” on Friday: The Lumberjacks might not make shots, and they might run into a hotter opponent, but they certainly won’t get rattled.

The certainly rolled past the Mountaineers and made March an even more miserable month for the Big 12 Conference.