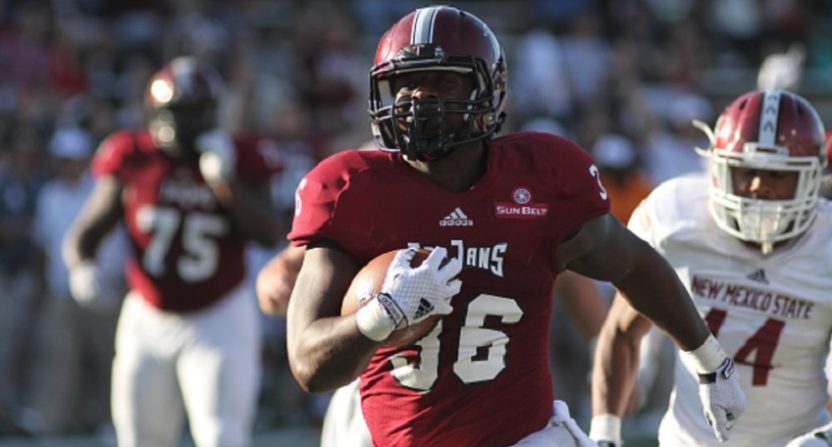 College football season continues to inch closer to being a real thing once again. It also means we continue our look at every conference. Up this week is a look at a conference dubbed the “Fun Belt” and better known as the Sun Belt.

While others may look to the conference for its high flying passing attacks, the real secret sauce is in the teams that can effectively run the football. How else do explain the ease with which the likes of Georgia Southern and Appalachian State have shot to the top of the conference?

Let’s take a look in to what the 2017 season holds for the Fun Belt running backs.

Who are the top returning running backs in the Big 12?

What isn’t to love about an offense in a pass-happy conference going old-school with a bruising rushing attack? Well, when you are Troy and you have a 240-pound back by the name of Jordan Chunn, then you best be an offense that likes to smack people in the mouth every Saturday. Chunn is one of two returning 1,000-yard rushers in the conference, so that narrows down the list. However, Chunn also faded down the stretch, failing to top the 100-yard mark in any of the final three games. His stamina needs to improve and Troy need a second running back to take some carries off his big body.

This may surprise given Rose rushed for just over 800 yards last season, but a look behind the numbers and you see a very talented back with a lot to prove in 2017. Rose missed the first three games last year due to injury and he just wasn’t himself most of the year. In fact, he only topped the 100-yard mark in four games after rushing for 1,651 yards as a sophomore. I’m banking on him bouncing back, and Sun Belt defenses better be scared. As long as his health issues are in the rearview mirror Jones could be the best back in the conference. I mean, the dude was AP 3rd team All-American in 2015.

Just four running backs from the Sun Belt topped the 1,000-yard mark and Moore was the best of them all as a sophomore last season. He put up 1,402 yards and 10 touchdowns in just his second season. Of those four 1,000-yard rushers, only two return this season, so that helped make this an easy choice. Oh, and something about being the reigning Sun Belt Offensive Player of the Year too. Just watch and enjoy one of the most underrated running backs in the country, as he doesn’t have to share as many carries this season. Look for him to top the 1,600 mark with ease in 2017.

Which RB is due for a breakout season?

The Jaguars were one of the strangest teams in 2016. After beating both Mississippi State and San Diego State in non-conference play as highlights, South Alabama went a horrific 2-6 in Sun Belt play and still made a bowl game.

One key piece to the puzzle was Xavier Johnson. He put up 831 yards and 10 touchdowns on just 151 carries and 12 games played. It was a slight step down from nearly breaking the 1,000-yard mark in his sophomore season. He’s got some better pieces to the puzzle around him, and I believe that, combined with his personal skill level, means a potential 1,000-yard rusher for the Jaguars.

He also may be the fastest featured back in the Sun Belt, as his open-field speed is just incredible to watch, as seen in his 2015 highlight film.

Who is a newcomer to watch in the Sun Belt?

We could cheat and say everything about the Coastal Carolina running back situation is something to watch. After all, the Chanticleers are brand new to FBS football and the Sun Belt. Oh, and the top two running backs from last season are gone. But we won’t do that to you.

Instead, we’ll highlight an equally interesting running back situation in Texas State. There’s no doubt that Everett Withers’ offense is predicated on running the football well. Just look at what the James Madison Dukes did in his final two years there. So adding an underrated 3-star running back named Anthony Smith is our pick.

Smith was the second-highest rated running back to sign with a Sun Belt team in the 2017 class. With Stedman Mayberry leaving the team, he should get plenty of carries and provides something different from the other running backs on the roster. With the lack of players at the position and the need for multiple running backs, Smith could end up as the starter for the Bobcats offense.

This wasn’t a great recruiting class, so the names from the 2017 class are likely ones to watch in 2018-19 and beyond. But if there is someone to watch this season, Smith is it.

What is the most intriguing running back situation in the Sun Belt?

Troy has the other returning 1,000-yard rusher in 240-pound Jordan Chunn. The Trojans also have one of the most intriguing “Thunder and Lightning” combinations in the country, thanks to Memphis transfer Jamarius Henderson.

Before arriving at Troy, Henderson showed flashes of brilliance while racking up 320 yards and averaging 5.3 yards per carry for the Tigers. Now put him in a backfield after Chunn has just gotten done pounding on a defense a few times in a row and good luck.

While other offenses are all about spreading the ball and air raid, Troy looks like an offense ready to pound you in to submission, kill you with speed and then remind you it can pass the football too. Few teams have more than one good running back, Troy has two quality players that should help make each other better. More importantly, the Trojans have a back who can help keep Chunn fresh without a dip in quality.

We also have to give special recognition to the Idaho Vandals, who have easily the most productive pair of backs returning. Isaiah Saunders and Aaron Duckworth racked up a combined 1,403 yards while splitting the carries almost exactly 50-50 on the year. Not a bad place for Paul Petrino’s offense to start up in Moscow, Idaho.