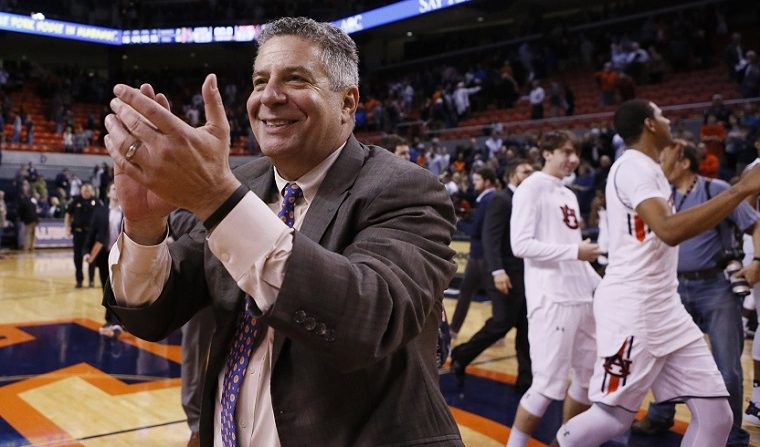 If you’re now checking in on college basketball following the end of college football season, surprise! The 2017-18 college hoops season is already at the midway point. Conference play is underway after a preseason that saw several top 25 upsets.

With roughly two months before the regular season ends and conference tournaments begin, bringing on March Madness, here are the most surprising and disappointing teams in college basketball thus far.

Surprise: No. 19 Clemson (14-1, 3-0). The state of South Carolina has been a longtime college basketball wasteland. It’s football country. However, the University of South Carolina changed that last year with a stunning Final Four run. Is it Clemson’s turn this year?

The Tigers were picked to finished 13th out of 15 schools. There were a few raised eyebrows when Brad Brownell had his contract extended in April. Nobody is second-guessing that now. Clemson has won 10 straight and is 3-0 in ACC play for the first time since 2006-07 and just the fifth time in program history. They have a consistent starting lineup with five players averaging in double figures, led by Marcquise Reed (15.9 points per game), a one-time Robert Morris transfer. Clemson is also 10th in the nation in defensive efficiency.

Disappointment: No. 7 Duke (13-2, 1-2). Yes. It does seem ridiculous and is probably an overreaction. However, the preseason pick to win the national championship has already dropped two conference games, losing to the lukewarm likes of Boston College and N.C. State, both of whom were both expected to be among the worst teams in the ACC.

The Blue rank No. 108 in the nation in defensive efficiency. Their top-ranked offense, keyed by freshmen sensation Marvin Bagley III and senior Grayson Allen, might not be enough for this team to get to the Final Four. If Duke loses at Pittsburgh (8-8, 0-3) on Wednesday, it will officially be panic time.

So far Duke is 1-2 in ACC play…both losses to teams that won't make the tournament, in no way am I hitting the panic button in Jan….but I'd be lying if I said I wasn't concerned with this team….lots of flaws. March is a long ways away….that is the positive

Surprise: Butler (12-6, 2-3). Butler delivered one of the best performances of any team this season with its 101-93 home victory over then No. 1 and previously unbeaten Villanova. It was a signature win for rookie coach LaVall Jordan whose team was picked to finished 8th in the 10-team conference. Butler also has a neutral site victory over Ohio State. The Bulldogs have played a good schedule with their past four losses coming against ranked teams (Purdue, Xavier, Seton Hall, and Creighton). Senior Kelan Martin (19.8 ppg) has been sensational.

Disappointment: St. John’s (10-7, 0-5). This was supposed to be the year when St. John’s made its move in the Big East. Maybe not an NCAA Tournament-worthy move,  but at least be more competitive. St. John’s was picked to finish fifth in the Big East, and Chris Mullin’s third season has been a continued struggle.

Yes, the Red Storm had a challenging opening league schedule with road games against ranked opponents Seton Hall and Creighton. Still, this bunch was blown out at home by DePaul. Mullin does have an excuse. Sophomore Marcus LoVett has been out with sprained left knee. With him, the Red Storm was 10-2.

I have a feeling Chris Mullin and St Johns battling Pat Ewing and Gtown was a lot better in the 80s than it is right now.

Surprise: Ohio State (13-4, 4-0). Chris Holtmann took over the program under less than ideal circumstances. Most college basketball hires take place in March. Holtmann came to Columbus in June after Thad Matta was forced out. The timing wasn’t great for a program that was 17-15, 7-11 last year and was picked to finish 11th out of 14 schools.

At one point this season, Ohio State was 5-3 after a home loss to Clemson. That loss doesn’t look so bad now. Since then, the Buckeyes have gone 8-1 with the only loss coming against defending national champion North Carolina. Holtmann is the first coach in school history to win his first four Big Ten games. Forward Keita Bates-Diop is a Big Ten player of the year candidate (20.0 ppg. 8.8 rpg.).

Disappointment: Northwestern (10-7, 1-3). Northwestern has reverted back to being Northwestern. After a magical season that saw the Wildcats finally make the NCAA Tournament and ranked in the preseason Top 25 poll for the first time, reality has set in. Northwestern has been bad on the road, going 1-4 with a defeat to Georgia Tech and its lone road victory by two points at DePaul.

In their latest loss, the Wildcats were down 30-15 in the first half at Penn State before falling, 78-63. At least we can all root for Julia Louis-Dreyfus’s son, Charlie Hall.

Surprise: No. 8 Texas Tech (14-2, 3-1). We enjoyed making fun of job-jumper Chris Beard who went from Arkansas Little Rock to UNLV to Texas Tech in a matter of weeks in 2016. Beard looks like he made the right decision to return to Texas Tech where he was previously an assistant.

Could Texas Tech end Kansas’ 13 straight seasons of Big 12 dominance? The Red Raiders have been one of the most impressive teams in the country, winning their first four games against teams that were ranked at the time. They’ve beaten then-No. 20 Northwestern, No. 22 Nevada, No. 18 Baylor and No. 10 Kansas. Their victory in Lawrence snapped a 16-game losing streak to Kansas and was the program’s first-ever victory at Allen Fieldhouse. Texas Tech is fifth in the nation in field goal percentage allowed (36.9).

Disappointment: Texas (10-5, 1-2). Shaka Smart came to Texas with plenty of fanfare after coaching VCU from a play-in game to the 2011 Final Four. Surely, he would succeed at Texas with the backing of one of the richest athletic departments in the country, as well as a state with plenty of homegrown talent.

It hasn’t been all that smooth. Texas has been mediocre and there hasn’t been much of an improvement overall from Rick Barnes’ final few seasons.

Freshman Mohamed Bamba is a stud, leading the Big 12 in rebounding (10.6) and blocked shots (4.6). But the Longhorns have been just OK when they were picked to finish fourth. Right now, they are at best the fourth-best basketball program in the state of Texas.

Shaka Smart's is not the answer at Texas Longhorns men's basketball team!

Surprise: Washington (12-4, 2-1). You could make a strong case for Arizona State, but Washington has already exceeded low expectations. The Huskies were picked 10th in the Pac-12, as opposed to Arizona State (13-2, 1-2) which was picked sixth.

Mike Hopkins was supposed to be Jim Boeheim’s eventual successor at Syracuse. Perhaps one day he will be. In the meanwhile, he’s off to a great start as a rookie head coach. Washington has already surpassed last year’s win total when the program went 9-22 with stud guard Markelle Fultz, the top overall pick in last year’s NBA Draft by the Philadelphia 76ers.

Washington already has a non-conference marquee win, beating Kansas in Kansas City last month. The Huskies don’t have any bad losses and could be 4-1 in the league after this week’s home games against California and Stanford.

Disappointment: Oregon (11-5, 1-2). Oregon is one loss away from last year’s total when the Ducks (33-6) reached the Final Four. The team lost some key players, but was still expected to rebuild behind New Mexico grad transfer Elijah Brown and McDonald’s All-American Troy Brown. The Ducks have already lost at home to Boise State and Utah. They don’t have a quality win and might miss out on the NCAA Tournament. We haven’t even mentioned the off-the-court issues facing coach Dana Altman.

Dana Altman’s phone records indicate he knew more about the Kavell Bigby-Williams case than Oregon says he did https://t.co/sXrUwOfESZ

Surprise: No. 22 Auburn (15-1, 3-0). Bruce Pearl may be coaching on borrowed time, given the FBI’s college basketball investigation. There is the possibility he could face termination at his second SEC school. But nobody ever said Pearl couldn’t coach. He got Tennessee within a game of the Final Four in 2010.

Entering this season, Pearl was already facing pressure since Auburn went 44-54 in his first three seasons. Now, he’s doing some of the best work of his career. The Tigers – despite being without two of their best players (Austin Wiley and Danjel Purifoy) due to the FBI investigation – have won 13 in a row. Auburn won consecutive games over ranked teams for the first time in 32 years after beating No. 22 Arkansas and No. 23 Tennessee.

Disappointment: Alabama (10-6, 2-2). Alabama was supposed to make some progress in Avery Johnson’s third season. But this year is looking like the ones before it. The Crimson Tide have struggled, even with McDonald’s All-American point guard Collin Sexton escaping eligibility issues due to the FBI scandal. Alabama has lost to Central Florida at home and was crushed at Georgia, 65-46. The Crimson Tide can’t stretch the floor because their 31.7 percent three-point shooting is among the worst in the nation.

Unfortunately, I think the writings on the wall for Alabama basketball. Avery Johnson=Johnny Jones. He might be a great recruiter but pathetic effort and on the floor coaching completely cancels that out.